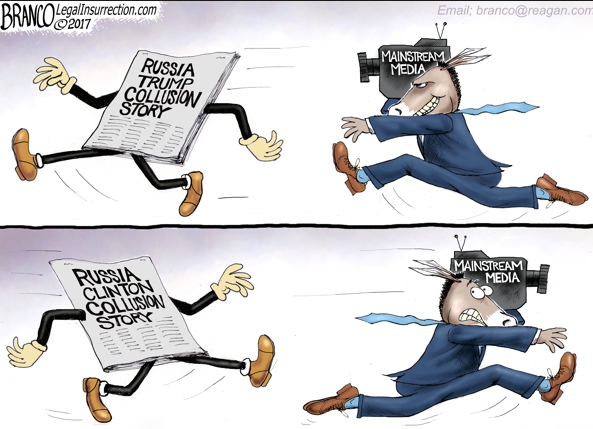 The Russia conspiracy theory hinges on the single creaky claim that the Democratic National Committee hacks were a Russian plot to elect Trump. The theory and all its illegitimate stepchildren, including Robert Mueller and his infinitely expanding corps of prosecutors, lives or dies by the DNC hacks.

Trying to elect Trump by releasing damaging insider information from the DNC never made any sense. The DNC was already a dysfunctional organization that was being run by the Clinton campaign. Undermining its leadership had little impact on the election, but a great deal on control of the DNC.

There has never been any evidence that the DNC hacks swung the election. The vast majority of people never even heard of them. Only a handful of political insiders and watchers, already deeply and unpersuadably committed to one side or another, could name the contents of a single email.

When you want to understand the motive of a crime, follow the money. See who benefited from it, not casually, but deeply and significantly enough to justify the effort and risk of undertaking it.

The hacks targeted Clinton allies and sought to undermine their influence within the Democrat Party.

Russiagate’s fervent conspiracy theorists spin an unlikely scenario in which Moscow had picked Trump early on, and then abandoned him in a crowded field against 16 candidates, while assuming that he would naturally triumph. Instead of leaking Jeb Bush’s campaign emails or Marco Rubio’s, they bided their time and waited to release Debbie Wasserman-Schultz’s and John Podesta’s emails.

That’s not a plan to help Trump win. It is a plan to take over the DNC.

Let’s look at what the Russians were actually doing during the election. They had set up fake Facebook sites aimed at the left on issues ranging from Black Lives Matter to the pipeline protests. That is not the behavior of a foreign intelligence operation that wanted Trump to win and the left to lose. Instead the Russians appeared to have allied with the left to push the Democrats even further to the left.

Targeting the DNC’s infrastructure also pushed the Democrats further to the left. The email hacks and leaks didn’t elect Trump, but did shake up the DNC. Bernie Sanders reemerged as the figurehead of a leftist movement to take over the DNC. Bernie’s boy, Keith Ellison, claimed the No. 2 spot at the DNC. And Alexandria Ocasia-Cortez, the left’s current crush, is the latest triumph for that machine.

The socialist left were the biggest beneficiaries of the DNC hacks. The stolen emails confirmed claims by the Bernie campaign that the process had been rigged against them. It justified their campaign to clean up the mess by taking over the DNC while wiping out key Democrats who had been opposed to them.

The left was also the political movement with the richest and deepest connections to Russian intelligence. The media claims that Putin and his old KGB comrades are the natural allies of the right, but the alliance between the far left and Russian intelligence agencies dates back almost a century.

Bernie Sanders honeymooned in the USSR. It’s hard to find a Marxist dictatorship backed by Russia that the elderly socialist hasn’t praised and supported at the expense of our national interests. Bernie praised Castro, he supported the Sandinistas, and his foreign policy was little more than a KGB wish list.

Certainly Russian intelligence services would have been aware of Bernie Sanders as a political sympathizer and maintained a file on him. On a visit to the Soviet Union, he would have interacted with KGB personnel or those reporting to them: as was true of any important foreign visitor at the time.

Is it really farfetched to believe that a lefty politician, who had a history of visiting and supporting Communist and Marxist countries, and their agendas, didn’t receive some support from Moscow?

The political movement that Bernie Sanders emerged from was notorious for its Russian ties.

As Discover the Networks notes, Sanders had worked as an organizer for the United Packinghouse Workers Union (UPWU) which was under investigation by the House Committee on Un-American Activities for its Communist ties. An article in Class Struggle magazine described UPWU as one of the “communist led or influenced unions”. Sanders had also spent time at a pro-Soviet Kibbutz.

While the media pursued Trump over his ties to Russian businessmen, Bernie had direct ties to organizations controlled directly or indirectly by Russian intelligence agencies.

Bernie flew a Soviet flag outside his office. As Paul Sperry noted, “Sanders addressed the national conference of the US Peace Council — a known front for the Communist Party USA, whose members swore an oath not only to the Soviet Union but to ‘the triumph of Soviet power in the US.’”

Given all this, is it really implausible that the Russians were trying to help Bernie Sanders?

The media made a great deal out of a memo by the Internet Research Agency, a Russian troll factory, allegedly claiming, “use any opportunity to criticize Hillary and the rest (except Sanders and Trump–we support them.)” This memo likely had more to do with the Agency’s objective of blending in on the left and the right to embed pro-Russian content than with Moscow’s larger political objectives, but the media quickly skips over the Sanders part of that memo while treating the Trump part as damning.

But if the Russians were trying to back a politician, would Trump or Bernie have been their choice?

But the Russians didn’t believe they could rig an election. They wouldn’t have believed that they could make Bernie president or even a presidential nominee. However they may have rightly thought that they could push the Democrats further to the left and boost their political allies within the DNC.

The Democrat hacks did little for Trump, but they gave Bernie a shot at taking over the DNC.

If we assume that Russia’s project was well-planned, proportional and successful, which considering the track record of their operations in this country is a sensible assumption, then that is what happened.

The post-election Dems are obsessed with Russia, but they’ve also moved further to the left. And, regardless of the rhetoric, the Russians spent generations building up ties with the American left.

Whether it’s Bernie Sanders, Jill Stein or any of the other socialists, the DNC hacks weakened the Democrat establishment and strengthened a movement that Russia once used as its hand puppet.

The Democrats have made plenty of cracks about Trump as a “Manchurian Candidate”. But the movie’s Manchurian candidate was publicly opposed to Russia while secretly benefiting from Russian election interference. That doesn’t describe Trump. It could describe Bernie Sanders. Or many others on the left.

Jill Stein, who initially cashed in by raising money for an election recount, fell afoul of Russiagate and is using recount cash to pay for the legal expenses of the Senate Intelligence Committee’s investigation of Russian election interference. The money is going to the Partnership for Civil Justice, part of the International Action Center, and allegedly a front for the Marxist-Leninist Workers World Party.

The left has been crying, “Russia” and “Treason” on every network and in every newspaper. It might want to consider what a real investigation of its ties to Russian intelligence agencies will turn up.