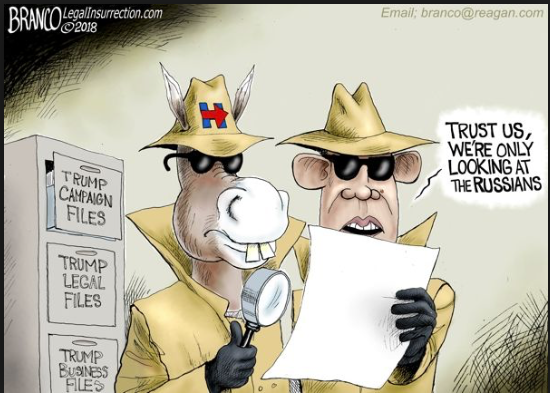 “Why the hell are we standing down?”

That was the question that the White House’s cybersecurity coordinator was asked after Susan Rice, Obama’s national security adviser, issued a stand down order on Russia.

The White House’s own cybersecurity people wanted an aggressive response before being told to stand down. Obama issued a bloodless warning to Russia while his people deliberately crippled our offense.

Democrats and the media blamed the Russian hacking on Trump. But it was Susan Rice who had told the cybersecurity team to “knock it off” and Obama’s people who hadn’t wanted him to be “boxed in” and forced to respond to Russian actions. Was this just the usual appeasement or was there more to it?

Why didn’t Obama and his team want to stop Russian hacking? Because they needed the Russians.

The 2016 election is really the story of two deep state intelligence operations that dovetailed neatly with each other. One was an ongoing Russian operation that took advantage of a weak president to sow chaos in America and Europe. The other was a domestic political operation utilizing counterintelligence resources in the United States and Europe to spy on, undermine and try to bring down Trump.

Contrary to claims made by Obama operatives, the Russian operation was not new. Russian hackers and spies had done enormous damage to America’s intelligence community. But they had succeeded so well because the mission of the intelligence community had shifted from deterring foreign adversaries to suppressing domestic political opponents. And this new mission made the Russians attacks irrelevant.

The Russian attacks on the formerly formidable NSA were so easy to accomplish because it was no longer countering the Russians. Instead Obama viewed it as a police state tool for spying on pro-Israel activists, members of Congress and Trump campaign officials. The NSA’s opposite numbers in Russia, posing as rogue hackers, were no longer hammering rivals, but a twisted and crippled organization.

The Mueller investigation is only the latest of these disguised counterintelligence police state gimmicks.

Without the Russians, Obama’s people would have just been nakedly abusing their powers to spy on Americans. But as long as the Russians were active, his deep state had the excuse that it needed.

The two intelligence operations, the Russian one and the Obama one, were interdependent. Their deep state symbiosis was possible only because neither side threatened the core interests of the other.

The Russians were a national security threat, but Obama’s people didn’t care about national security. And Obama’s counterintelligence operation was aimed at domestic political opponents rather than the Russians. It’s still unknown if the Russians and Obama’s people actively colluded in these operations, but it’s likely that seasoned professionals on both sides had a quiet understanding of their respective roles.

The Russians had not set out to alter the outcome of the election. Nor did they have that capability. Their attacks followed the pattern of the Dulles Plan, a fictional piece of Soviet propaganda which attributed any anti-Soviet activity to an American conspiracy to undermine Communism. The KGB veterans running Russia as an actual deep state sought to undermine the American political system by feeding extremism, creating panic and discrediting elections. And that also fit the Obama agenda.

Obama’s people had spent eight years dismantling political norms and undermining America. The KGB deep state conspirators in Russia and their leftist counterparts in Washington D.C. had emerged from the same ideological school. Their aims and allegiances had diverged, but the ex-Communists in Moscow and Adams Morgan Socialists in Washington D.C. shared a common hatred for America and its values.

There was no reason to interfere with the Russian interference. Obama and his people did not believe that the Russians would significantly affect the election. But if his efforts to eavesdrop on Trump officials came to light, the Russians had provided him with an alibi. Susan Rice, as national security adviser, was at the center of the eavesdropping effort and had every reason to protect the Russian operation.

Nor did the Obama deep state have any particular allegiance to Hillary Clinton’s campaign. The Obamas and the Clintons loathed each other. Though both factions were leftists, their approaches were as much at variance as Bolsheviks and Trotskyists. Obama had been forced to make a deal with the Clintons to secure his hold on the Democrat operation. But his support for Hillary Clinton was only an endorsement of the lesser evil. Her defeat left him and his political allies in total control of the Democrat operation.

And the chaos and violence of his anti-Trump resistance achieved his goal of radicalizing the Democrats.

The Russians didn’t hack the election. That conspiracy theory remains wishful thinking. But the allegation proved very useful in enabling everything from the pre-election eavesdropping on political opponents to the post-election sabotage of the Trump administration to the move away from electronic voting to paper ballots which enable the old-fashioned kind of Democrat ballot stuffing.

But like an iceberg, the most troubling development of the Russian conspiracy is mostly underwater.

After 9/11, the intelligence community was revived with a new purpose. That purpose was fighting Islamic terrorism. During Obama’s two terms, the intelligence community was compromised, crippled and transformed into a domestic deep state aimed at suppressing the political opposition. Tragically, it came to resemble the KGB, with its domestic surveillance and investigation of political opponents.

This transformation of law enforcement and intelligence agencies did not emerge out of thin air.

The Founders were rightly cautious of the power of a strong central government. And a national law enforcement and intelligence infrastructure was always ripe for the worst big government abuses.

The FBI’s record of political tampering under Hoover was no secret. And it didn’t end there. Everything in Washington D.C. is political. Especially the apolitical. Its engine of careerism runs on networking and connections. The apolitical bureaucracy is a buzzing hive of ambition and backstabbing. Every agency has its own Machiavellian subcultures with courtiers, saboteurs, spies and manipulators. And every agency culture has a leftist ideological component, among its other agendas, some more than others.

The Obama years politicized everything from the food you ate to the clothes you wore. Certainly no arm of government survived those terrible two terms without being substantially transformed.

As the cold winter sun set on another year in Washington D.C., the deep state was reborn.

The Democrats have spent two years accusing Republicans of colluding with Russia. But as usual they were accusing their political opponents of their own crime. Republicans had not undermined national security. The Democrats did. A Republican president hadn’t sat across from Putin’s agent and assured him that he would have more flexibility to make deals after the election. A Republican president hadn’t let the Russians hack our national security secrets to provide a casus belli for targeting his opponents.

That was all Obama.

Barack Obama and Susan Rice sabotaged efforts to stop the Russians because their deep state domestic spying program depended on Russian collusion, both the reality and the allegation. Everything from the original allegation, Clinton campaign opposition research which drew on claims by a Russian intelligence operative, to the Mueller counterintelligence investigation, which has done nothing to actually stop the Russians, but has gone after Republican campaign pros, needed the Russians as its stalking horse.

Russian hacking didn’t change the election. But Obama’s exploitation of Russian hacking nearly did. We still don’t know what materials were gathered by the eavesdropping operation. Or who saw them. Information is the ultimate weapon in national security and election campaigns. Obama used the former to tamper with the latter. And all these years later, we still don’t know what damage was done.

While Mueller prowls around pursuing Hillary Clinton’s conspiracy theories, those crimes remain unexplored. But we do know that the Russians didn’t do anything that Obama didn’t allow them to do.

Any serious effort to investigate Russian election hacks must begin with the man who let them to do it.

The Heart of the Child Separation Issue Is the Law