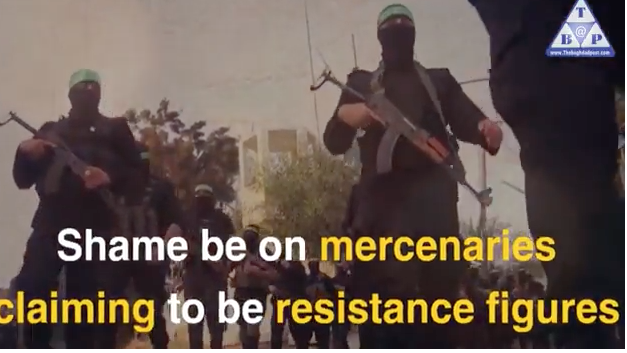 Recently I read an amazing news item bearing the headline ‘Hamas Double Standard on Syria.’ This piece of journalism reported on the Palestinian community suffering massive destruction with over ten thousand displaced and many hundreds killed in artillery bombing and aerial bombardments.

The journalist, Kheir Allah, called it “one of the biggest tragedies in Palestinian history, one that calls for widespread condemnation and denunciation.”

Why was there no “widespread condemnation and denunciation”?

Because this wasn’t in the Gaza Strip, nor in Judea & Samaria in which the “Hate Israel” mob could scream and shout. This was in a place called Yarmouk and the perpetrators of this massacre were first the Syrian rebels, then ISIS, and then Russia-Iran assisted Assad regime. When there is no Israel to blame, the Palestinian issue is just a yawn.

But this wasn’t the thrust of the article. The aim of the article was the silence of the Palestinian leadership both in Ramallah and in Gaza City to this issue.

“Even the Palestinian leadership has remained silent,” the journalist wrote. “Worst of all is Hamas chief, Ismail Haniyeh, who went so far as to describe the Syrian regime as a ‘guardian of Palestinian rights.’”

Assad’s planes are bombing Palestinian homes and killing the civilians, yet Hamas calls the Syrian dictator a guardian of Palestinian rights!

Kheir Allah stated that Haniyeh’s silence about the deaths, injuries, and homelessness “revealed that Hamas does not care at all about the rights of Palestinians.”

He went on to question, “If Hamas is not bothered by the condition of Palestinian refugees abroad, why should it care about those living in the Gaza Strip? Indeed, since Hamas took over Gaza a decade ago, it has done nothing to improve the living conditions of the population it controls. The only thing the people of Gaza have experienced under Hamas rule is increased misery and isolation.”

The surprising revelation was that this article did not appear in a pro-Israel Western newspaper, but in the London edition of Al-Arab on June 23.

When you see the Arab media exposing painful truths about the oppression of the Palestinian people by their own leadership and the total disregard of their people living elsewhere in the violent Arab world this really is newsworthy, but it is happening more often in recent weeks.

Al-Arab concluded its piece by warning Haniyeh that he is paying the price for aligning itself with “the worst regimes in the region that have brought death and destruction upon the people of Palestine.”

Slowly, but surely, the Arab world is beginning to open up and express themselves truthfully about the conflicted and divided Palestinian political leadership.

Hamas was angry, and the Palestinian Authority was silent, when earlier this year the Saudi Foreign Minister, Adel Al-Jubeir, described Hamas as an ‘extremist’ and a “terrorist” group at a meeting of the European Parliament Foreign Affairs Committee in Brussels.

Saudi Arabian political researcher, Abdul Hameed al-Hakeem, in a tweet early in 2018, called on Hamas to decide between what he called “the Iranian Nazi regime” and peace with Israel.

The new ruler of Saudi Arabia, Mohammad bin Sultan, after saying in April that “Israel has a right to its own homeland” backed up that statement in stronger terms a week later by saying that the Palestinians should accept peace proposals or “shut up!”

“For the past 40 years, the Palestinian leadership has missed opportunities again and again, and rejected all the offers it was given. It’s about time that the Palestinians accept the offers, and agree to come to the negotiating table — or they should shut up and stop complaining.”

There is little doubt that much of the Arab world have had it with the whining and violent rejectionism on both sides of the Palestinian political chasm. They clearly see that Fatah and Hamas hate each other almost as much as they both hate Israel, and they are fed up with them.

They have more pressing things to worry about, such as Iran, and possibly peace with Israel.

Barry Shaw is the author of ‘Fighting Hamas, BDS, and Anti-Semitism.’ He is the Senior Associate for Public Diplomacy at the Israel Institute for Strategic Studies.

AlfonZo Rachel: The TRUE Racist History of the Democrat Party