We live in very strange times to say the least. I never thought I’d live to see the day when my patriotism as well as the patriotism of millions of Americans would be stirred not by any foreign threat but by fellow American citizens with a different concept of America. In the past chants of ‘USA, USA, USA!’ were typically limited to athletic competitions involving an American competitor or team versus an opponent from another country. Now those same chants have been and continue to be directed at President Trump during his rallies. Two visions for this country have emerged.

The left’s vision is that blind acceptance and tolerance is the only pathway to a better America. Moreover, they see socialism as the means to creating a better standard of living. Isn’t it just a simple matter of raising the minimum wage? If someone is unable to find work shouldn’t the government take care of them? Why should we even enforce immigration? Shouldn’t America welcome any and all people who wish to enter our country? Surely the cheap labor these individuals provide won’t hurt the employment situation. Only a prejudiced individual would assume any immigrant would commit a criminal act. Our safety isn’t endangered by open borders. Plus it’s wrong that some people are wealthier than others. How dare people enjoy the fruits of their success? Also, shouldn’t people be allowed to use whichever restroom they choose regardless of anatomy?

Clearly the world is full of love and peace and it’s the United States that should be held accountable for disrupting the utopia that is planet Earth. According to the left, all that stands in the way of world peace is President Trump and those who share his views. This is the ‘evil tyrant’ who just very well may be the one who gets Roe vs. Wade overturned. I’m not sure how preventing mass murder of the unborn makes him a brutal maniac, but his treatment of migrants and enforcement of existing immigration laws has apparently already secured his place amongst history’s most evil despots.

Trump and his supporters have a vision grounded in reality. These are the individuals who don’t buy into the propaganda perpetuated by mainstream media and leftist political leaders. Many people actually believe that the country’s direction should be guided by a business person, not liberal Hollywood. The world isn’t a perfect place and adhering to an ever increasingly complex set of politically correct standards is all but impossible and actually divisive. America is best served by focusing on our strengths, such as capitalism. In international dealings, we should look out for our own interests from both an economic and military perspective. America became great as a Christian nation. The liberal left would love to redefine morality. For those who eschew religion, they see no need to be bound by the laws of God. For those who do acknowledge God, ignoring and attempting to redefine His laws is a one-way ticket to disaster. Sadly, large media outlets are not content reporting the news…they also want to tell us how to interpret it.

In hindsight Abraham Lincoln had it easy from the standpoint that while his America was hopelessly divided, it was divided along geographic lines. There are a few states that seem to uniformally fit along certain political lines but in most places across America, the divide easily exists within state and even local borders. The level of tension the currently exists almost seems destined to end in random mob violence. Trump’s challenge is far greater from that standpoint. Lincoln was fighting organized resistance from entire states. Military action was easier to dictate under those circumstances. I have no idea what Trump should do if prolonged riots and anarchy emerge in regions of this country along no clear geographic bounds. How will order be restored? How will the country become unified again? 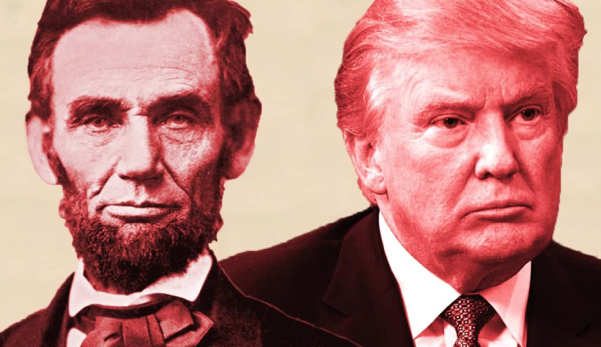 I’d love to hear a hypothetical conversation between Trump and Lincoln. What advice would Lincoln offer? Some scholars define a civil war as a conflict between factions within the same country that seek to gain control over the same central government. America’s Civil War is often referred to as ‘The War Between the States’ not to sanitize the conflict, but to indicate the struggle was not about controlling a shared central government. The America of the mid 19th century was for all intents two separate cultures and beliefs divided along northern and southern boundaries. Slavery was the issue that finally led to war. Upon election, people proclaimed that Trump was ‘not my President.’ To Lincoln that would probably seem tame. Upon Lincoln’s election, entire states said ‘not my President’ and withdrew from the Union to prove it. Lincoln had two choices: Let the Southern states form their own country or conquer them to bring them back into the Union. Lincoln chose the latter and successfully reunited the Union, but the scars resonate to this day. Do we really want to go through it again?

Lincoln would likely sense a certain kind of familiarity with the massive divide between the Republican and Democratic parties of today. He would also empathize with the way the media treats Trump. Given there was a war taking place, Lincoln exercised extraordinary powers and actually shut down some Democratic newspapers on the basis of them aiding and comforting the enemy. Of course the press or modern MSM is a far more formidable an opponent to Trump than anything Lincoln faced. The ownership of MSM is in the hands of only a few media giants. Unlike Lincoln, Trump isn’t dealing with thousands of privately held news outlets. He is dealing with a handful of powerful corporate interests that can constantly present an expansive and negative view of everything Trump does and in many cases invent false stories. Anything that doesn’t fit in with MSMs vision is merely ignored. The lack of media integrity has reached a point that they can’t be trusted to report anything accurately and honestly.

If one listened only to MSM they may easily reach the conclusion that Trump presents an unacceptable danger to the future of the United States. In some cases it seems as though they are trying to radicalize the public by convincing people that it is perfectly acceptable, if not their civic duty, to remove Trump from office by any means necessary. Ask yourself this: If someone attempted to harm the President, could the perpetrator make a strong case that MSM motivated them to do it? I say yes.There is a word for that: Treason. The agenda being pushed isn’t state secession (which is completely unrealistic, if not impossible) but ‘regaining’ control over the Federal government through removal of its chief executive: President Trump. This notion is more in line with the classic definition of a civil war, which is two factions vying for control of a central government. The goal is to eliminate Trump and replace him with someone who represents leftist views and/or will give in to pressure.

In the end I think Lincoln…the lawyer… would warn Trump and advise him to use the law to protect not only the stability of the Federal government but the future of the United States. 18 U.S. Code § 2385 was created for a reason. It is illegal to advocate the overthrow of the U.S. Government. That law needs to be taken seriously. It’s one thing to criticize the President, it is an entirely different issue to sell t-shirts advocating the impeachment of our 45th President. If a President crosses the line, impeachment is a valid remedy, but that is up to Congress, not the general public. Arguing for impeachment on general grounds based on hatred of the current office holder is in essence advocating for the removal of an elected official by means other than the electoral process. Consequently Walmart and others that engage in this type of activity should be fined and/or imprisoned.

Though approximately half the country allegedly hates Trump, he won the Presidency legitimately. He is carrying out the wishes of millions of Americans. No politician can please everybody, but how can one argue Trump should be removed for carrying out the promises he made during his campaign? Isn’t that how the democratic process is supposed to work? Trump has not violated the U.S. Constitution but he took an oath to uphold it. At some point a distinction between legitimate free speech and advocating the overthrow of the government needs to be made. One is a freedom, the other is a crime. Lincoln made the hard choices. At some point Trump may have to do the same.

The Politics of Tribal Identity