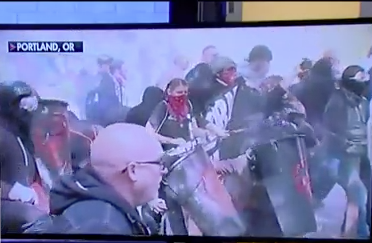 Those who do not learn from history are condemned to repeat it; but those who know history are forced to watch others repeat the mistakes and choices which lead to inevitable societal ruin. Our nation appears to be on a path eerily similar to the disastrous French Revolution rather than the providential American Revolution. The current cultural war being waged in social media has taken a marked turn in the last few months as we seem to be transitioning toward a much more volatile virtual Reign of Terror which has claimed quite a few social media victims and is sure to destroy many more lives, careers, and reputations.

The French Revolution immediately conjures images of bloodthirsty mobs cheering the deadly efficiency of Madame Guillotine, but it did not start out this way. Spurred by the improbable success of their new American allies, French citizens dreamed that they, too, could enjoy the blessings of Liberty. Just as the American Founders listed a “long list of grievances” for their unrest, the French had legitimate cause for setting up a new form of government as well. French citizens were bound by a strict hierarchy of Estates which determined one’s social standing, economic level, and future opportunities from birth.

But whereas American Revolutionaries championed individual liberty as the key to the pursuit of happiness, their French counterparts rallied to “Liberty, Equality, Fraternity.” While each of these goals is subjective in nature, the American standard allows the individual to be the arbiter, while the French standard requires Government to be the judge and enforcer of results. Therefore disagreement with official opinion cannot be tolerated. In today’s online world, though an individual’s true intent may be honest or laudable, only those who are tolerant of a politically correct, but dishonest and detrimental worldview, are given a public platform and defended from baseless and intolerant personal attacks.

The American Founders chose to uphold a Biblical worldview of Nature and Nature’s God and accepted the principles of Locke’s Social Contract. The French Revolutionaries rejected God, set upon a campaign of “dechristianization,” and chose to embrace the philosophy of Rousseau as they sited Reason and the Rights of Man as their ideal. This deified human reasoning and ultimately established a new state religion, The Cult of Reason, which led to the desecration of the Cathedral of Notre Dame and fueled hatred culminating in the martyrdom of countless church officials and associates.

Thus, the French Revolution inevitably became a Romans 1 society. “…Although they knew God, they neither glorified him as God nor gave thanks to him, but their thinking became futile and their foolish hearts were darkened. Although they claimed to be wise, they became fools….Therefore God gave them over in the sinful desires of their hearts.” Today’s society channels this philosophy via the worship of “settled” Science, the celebration of personal destructive choices, and a call for Government to enforce compliance to the personal whims of others.

The leaders of the French Revolution first tried to pursue political means to achieve their goals. The Paris district of Cordelier was the headquarters of populist clubs which sought to work change within the system – until they were redistricted out of existence in a political shuffle which effectively eliminated this option. French Revolutionary leaders such as Marat then literally took their cause to the streets in a series of protests and riots such as the Storming of the Bastille and “10 August” protest.

These were precursors to our modern Occupy, BLM, and Antifa protests which, though described as “mostly peaceful” in the media, often lead to violence, rioting, and bloodshed. The Right in America is much more reticent to take such actions, but they surely won’t be docile forever as they see more and more personal Liberty eroding. We may eventually approach the point when such actions will escalate on both sides and lead to violent confrontations becoming widespread and commonplace.

In France, the normal standards of decency in political activism were swept away as public protest continued to escalate, becoming more violent, divisive and deadly. Individuals such as Marie Antoinette, whole swathes of society such as priests and nuns, and anyone deemed an Enemy of the People were quickly condemned and executed as the Revolution endorsed full blown Terror. The “Law of Suspects” (Law of 22 Prairial) allowed charges based upon rumor and set up a three day trial system in which the accused were offered no defense, could call no witnesses, and no sentence other than death could be issued. At this point popular Revolutionaries, such as Danton, who decided things had gone far enough and called for a return to normalcy, were themselves quickly sentenced to meet Madame Guillotine in person. In our own society the mere public charge of a dozen “-ism’s” and “phobias” can destroy an individual as quickly, brutally, and efficiently.

All Revolutions are susceptible to tyranny and despotism for the simple reason that it is hard for sinful human beings to define the point of victory and voluntarily relinquish control. Revolutions may begin with noble ideals, but can quickly degenerate into chaos as strong leaders with different opinions, values, and goals vie for power. The French had written a Progressive Constitution in 1793 which pledged equal rights for women, wealth redistribution and a host of other social utopia guarantees. The catch was that these promises could not be fulfilled until the Revolution was complete. Anyone who was not with the program had to first be reeducated or eradicated.

Since it is impossible to read minds and determine intentions, the Revolutionaries could not take chances and the Convention that had written the Constitution decreed that “the provisional government shall be revolutionary until peace.” Today’s Social Justice Warriors promote the same revolutionary playbook. There is never an end to demands for tolerance and compromise. Utopia could be achieved if only bigots would bake the cake, Christians would stop judging, and certain segments of society would own up to and renounce their unearned privilege. But those who hold to objective standards cannot accede to subjective, ever-changing demands.

By this point the Revolutionaries had fully embraced the most evil of philosophies: The Ends justify the Means. This, then, led to an all out Reign of Terror. Though it is easy for us to point out these characteristics on the other side, it is imperative that we make an honest self-examination of our own efforts and actions:

Are we grounded in an objective standard or do we only (and always no matter what) support our Political Team or Tribe?

Are we evaluating individual statements and actions, or, are we putting people into groups and championing or condemning them wholesale?

Are we clearly communicating our goals in a way that can be objectively measured and understood by those who are not on our side?

Are we demonizing others in an effort to discount or disregard any truth in their message?

Have we embraced The End Justifies the Means?

Chalk Up a Victory for God’s Love, Free Speech, and Individual Rights

An Abortion Dilemma for the Left