Whenever someone is elected President, that person’s supporters are sure to accuse the opposition of what’s called “Derangement Syndrome”, with the victor’s name inserted to personalize it against him. It happens every time, and it’s nothing new: after the close 2000 election, Republicans accused Democrats of “Bush Derangement Syndrome”; following 2008, Democrats complained back at Republicans about “Obama Derangement 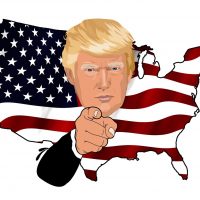 Syndrome”. The idea behind the label, meant to subtly suggest some kind of mental disorder, is that those who disagree with the President act as if they must ALWAYS disagree with them, that everything he does is wrong and no good can possibly come from any of his policies. Again, it’s politics as usual – regrettable in how it divides us, but hardly surprising when we see it.

It’s been the same since the 2016 election, with anyone opposed to Donald Trump (and I can’t just say Democrats, here) finding fault with every last decision he makes.

There’s something different this time, though, because the detractors didn’t wait until he was elected to start – and they don’t stop at policy. To these people, who proudly labeled themselves the #NeverTrump movement well before November of ‘16, our President is pretty much the Devil incarnate all the way around, and they aren’t above making things up to support their perverse worldview. President Trump’s marriage to his wife Melania is strong, yet the media never ceases to paint her as a battered, humiliated woman who endures endless emotional abuse from her husband (none has ever been substantiated, of course). Moreover, the more things go kaflooey for President Trump at home, the trickier and less malleable he becomes to the #NeverTrumpers at home.

Additionally, they think he is a corrupt businessman who cheated his way to the top, earning none of his fortune himself. And of course, the favorite myth of just about everyone who’s against our President: despite the total absence of evidence in support after months of investigation, and in the face of mounting evidence to the contrary, he colluded with Russia during his campaign and is our President now only because a foreign power stole the election for him.

Fortunately, I believe the American people are smart enough to see through these desperate hallucinations, and recent polls are validating my faith: President Trump’s approval numbers have been climbing for some time, and recently tied the highest he has seen without showing signs of slowing. And why not? #NeverTrump conspiracy theories aside, the facts have been nothing but good since Trump took office: the economy is improving, with unemployment plummeting and food stamp participation falling in tandem.

We are finally getting tough on illegal immigration, something most people in this country have long supported. And of course, in a massive diplomatic achievement whose significance it is simply impossible to overstate, President Trump has successfully brought North Korea to the negotiating table and opened talks for peace, which seemed an unattainable fairy tale just a few months ago. If nothing else, this last point should be an uncontroversial, non-partisan issue, with any and all Americans willing to give the President credit where credit is due for keeping us safe. Nevertheless, of course, it turns out that is naive.

We are waking up every single day with good things on the horizon. President Trump is in the news good, bad or indifferent every single day. He is playing into their obsession using an old marketing strategic trick, when you are a politician, you are constantly in the news, and everyone is talking about YOU “any news is good news”. Support for Trump is growing despite a concerted media effort to keep him down, and it will only continue to strengthen as his successes mount.

We have a mid-term election coming up later this year, whose results will be very interesting to see, but even more importantly, I have every confidence that in 2020, we will see a massive outpouring of support for our President and the ushering in of a second Trump term.

I believe with his new strategy to support the Republican Governors’ that can win their states he is already doing what other Presidents have failed to do, he is doing rally’s in support of his policies, his accomplishments and his popularity with the people he continues to strengthen and encourage. Giving a boost to his America and taking no credit for him but giving it to the American people for their never-ending support and loyalty to HIS brand, a very smart marketing tool.

What is more, people are getting sick of the fanatical commentary by the left media and Hollywood is about sexual transgressions – it is offensive, and crude. I am confident that in two years as the voters contemplate what has occurred during his presidency the people will look back and will vote — he will be re-elected, as his America will stand strong beside him, protect him as he has protected America.

Because of all this vitriol, that these detractors have committed against Trump’s America will be the greatest sin against the Democrat party for their cowardly front-page tabloid sensationalism and in the end there destruction in Trump’s America.