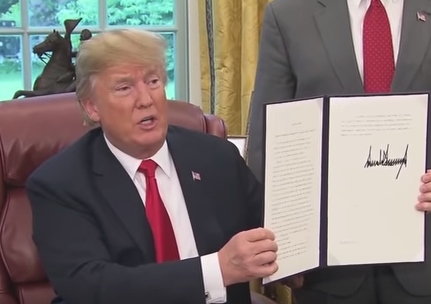 Amid a hysterical media and Democratic Party over the separation of families (the same law that existed and was utilized by Obama), President Trump has signed an Executive Order to keep them together. The media was so happy! Ecstatic even. They had finally beaten Trump! He had caved!! And it might cause a split between him and his base. Oh the joy and rapture of this moment! But then…..just like Lucy pulling the football away from Charlie Brown (or election night 2016), realization began to settle in. Because the EO did indeed keep families together….in detention. But this meant no more children being ripped apart from their parents and put in prison/concentration camps. Isn’t this a good thing?? Why no, it’s not to the left. Because their goal is to have illegal immigrant families stay together and just be allowed to enter the country and disappear until it was time to vote for Democrats. So what seemed like triumph became defeat by the Trumpster again. I feel like I am watching an episode of “Dallas” where Trump is J.R. Ewing and the left is Cliff Barnes. Every time poor Cliff thought he had beaten J.R., he ended up defeated again.

In the EO Trump accurately lays out the reason he had to do this:

This Administration will initiate proceedings to enforce this and other criminal provisions of the INA until and unless Congress directs otherwise. It is also the policy of this Administration to maintain family unity, including by detaining alien families together where appropriate and consistent with law and available resources. It is unfortunate that Congress’s failure to act and court orders have put the Administration in the position of separating alien families to effectively enforce the law.

Pelosi of Borg weighed in too:

“The Democrats have taken full responsibly for securing our borders. We know that that is a responsibility that we have.

But we don’t think that we have to put children in cages to do it. There is a better way. The president is either not knowing, not caring, delusional, in denial about his own policies being outside the circle of civilized human behavior.”

We laugh at this but you have to remember she is speaking to her clueless base trying to gen up hatred for Trump. And they will repeat this like puppets.

Then the two joined forces and demanded Trump do something:

“It seems that the administration lacks a plan, intention, and a sense of urgency to begin reuniting these children — many of whom have suffered serious emotional anguish — with their parents,” the two Democratic leaders wrote in their letter. Schumer and Pelosi are demanding the administration present a plan “as soon as possible” to reunite children already separated. That plan, according to the two lawmakers, should include undoing the zero tolerance immigration policies that lead to families being separated along the border, reuniting families and, once reunited, providing alternatives to detention.

Good grief. Are these two clowns capable of taking any responsibility as representatives of the people? Can they at least dress themselves in the morning or does Trump need to lay out a plan for them on that as well? If I were a supporter of either of these two I would be seriously calling for them to step down. This is totally embarrassing. You had your chance to do something and you failed just like you did on DACA. The media will hail them as winning over Trump but outside their bubble they just look silly.

So back to the Executive Order, the main item which has the Democrats bending themselves into pretzels today is this:

(e) The Attorney General shall promptly file a request with the U.S. District Court for the Central District of California to modify the Settlement Agreement in Flores v. Sessions, CV 85-4544 (“Flores settlement”), in a manner that would permit the Secretary, under present resource constraints, to detain alien families together throughout the pendency of criminal proceedings for improper entry or any removal or other immigration proceedings.

This means that they can be detained indefinitely if I am reading that correctly. And based on the left’s reaction I am. They know that catch and release is not returning. Bye bye future voter base.

As predicted by Rush, the EO is already being challenged by a leftist – Andrew Cuomo, who wrote an op-ed called “A moral outrage we must not tolerate.” And in case your wondering, no, he is not talking about abortion.

“The Trump administration’s inhumane treatment of immigrant children has left a dark stain on the history of our nation. It is a human tragedy and a threat to our values. The mistreatment of children seeking refuge within our borders is a moral outrage and an affront to the teachings of every major religion.”

Values talk from a leftist? Wow. Children seeking refuge? I thought it was the parents seeking refuge? The left would never grant this favor on the unborn. And referring to religion? Only when it suits their purposes.

In announcing the lawsuit:

“This week, I announced New York State’s intent to file a multiagency lawsuit against the Trump administration to swiftly reunite children with their parents and put an end to the abuse of immigrant families. We fully intend to move forward with this suit to prevent any further harm to the children in custody.

Detaining children — alone or even with their families for an extended period of time — is a violation of the terms of the 1997 Flores settlement agreement with the federal government, which set national standards regarding the detention, release and treatment of children in immigration detention. The settlement, which the administration is seeking to modify, prioritizes the principle of family unity, requires juvenile immigrant detainees to be released within 20 days, and explicitly requires family reunification with a clear preference for parental custody.”

Whoa! What’s this? Legislation from 1997? But Cuomo said this was all Trump’s policy! As I mentioned in my last article, Rich Lowry covered it a month ago:

That’s because of something called the Flores Consent Decree from 1997. It says that unaccompanied children can be held only 20 days. A ruling by the Ninth Circuit extended this 20-day limit to children who come as part of family units. So even if we want to hold a family unit together, we are forbidden from doing so.

Cuomo finishes with this:

Together, we can reaffirm our commitment to the fundamental values that built this state and this nation.

Question: Would that be values such as racism? Because that’s what we hear most of the time when liberals talk about the Founding Fathers.

I think all of the above is evidence that the left has been beaten again. I am constantly amazed at Donald Trump’s ability to completely outflank and expose them. Once again their hypocrisy and dishonesty has been put in display for all to see. And the media is now forced to talk about the Flores legislation after spending days accusing Trump of initiating this policy on his own.

Trump will continue to win because the media’s belief that he is a no nothing ignoramus is never going to change. It’s fine with me. I will never tire of winning.

Rush said it best when talking about Trump today:

I don’t know if Donald Trump is a strategic genius, but I can tell you that he is an instinctive one. I don’t know how much Trump sits around and strategizes and tries to play, for example, a long game and say, “Okay. If I do this and do this, I know they’re gonna do this and this. So after that happens, I’m going to do this.”

I don’t know if he’s that many steps down the board or not. But I know that his instincts are practically infallible here. He has turned these people inside out, upside down. He has forced them, made them, caused them — his enemies — to expose their hypocrisy, to expose their lies, and to expose the fact that they’re dishonest when reporting so-called news.

I think a great deal of that strategy is being able to tweek the media with humor because they just don’t get it (and he knows this). For example, they will be beside themselves when they learn that Trump said this last night at a rally:

“You ever notice they always call the other side — and they do this on purpose — the elite! The elite! Why are they elite? I have a much better apartment than they do. I’m smarter than they are. I’m richer than they are. I became president, and they didn’t — and I’m representing the greatest, smartest, most loyal, best people on earth, the deplorables. Remember that?”

That is Trump at his best. And if there was ever any thoughts of a split between Trump and his supporters they were “trumped” last night.