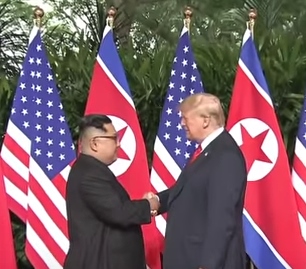 President Trump has done something that I thought wasn’t possible. No, not the deal with North Korea. I always thought that was possible.

President Trump made Dennis Rodman cry. I wouldn’t have believed it. The world may never be the same.

But seriously, June 12, 2018 was a monumental moment as President Trump and Kim Jong-un signed a treaty to denuclearize North Korea. This is by far the biggest and most successful deal Trump has ever done – at least up to this point. And this is most historic treaty since Reagan and Gorbachev in 1987. This deal should put to rest any notion that Trump doesn’t know what he is doing. You combine this with his America First stance at the G7 and this has been a phenomenal week for the President. And this agreement is ONE PAGE! Congress should emulate this going forward!

Here are the major points of the deal (full text here):

And not only was Trump successful in his initial international “Art of the Deal”, he totally outplayed/outsmarted the media – again. Signing treaties like this aren’t happenstance. They are heavily orchestrated behind the scenes beforehand so that nothing goes wrong at the moment of truth. So while the media (who know this!) was mocking Trump about being inexperienced on international affairs and Trump himself was downplaying the possible results of the meeting (calling it a “getting to know you” session), the agreement was being set up (kudos to Mike Pompeo!). Even in the day leading up to it the media breathlessly reported that Trump would be leaving early, further lowering expectations. Yet meanwhile Trump new exactly what was going to happen. Like a expert poker player he kept it close to the vest and then revealed a full flush. It was beautiful strategy (that he can tell you). And it worked. Trump wins again!! And once again the left is left looking utterly foolish. This is becoming a familiar pattern. Their disdain and hatred for Trump has completely destroyed their ability for rational thought. They really do think that Trump is an idiot and over his head. Also, the fact that Trump did this and Obama couldn’t just drives them further cuckoo.

And lest you thought Trump would get ANY credit for this (why, we can’t have THAT!), here is a rough summary of the media’s talking points/criticisms:

So the bottom line is that this was a major win for Trump – and the world. Yes we will need to make sure Kim follows through on his promises – and no Hans Blix type doing the inspections please! And don’t be fooled (as the left surely will be) that Trump’s praise of Kim means they are BFF’s. If Kim steps out of line it’ll be back to Rocket Man. But Trump has accomplished something truly historic and should be given the Nobel Peace Prize (considering he’s done more than just being elected).

Now, could someone please get Dennis Rodman a tissue?

UPDATE: Rush Limbaugh found a clip of Trump from 1999 talking about North Korea. I think it is extremely interesting in light of recent events:

Trump: The biggest problem this world has is nuclear proliferation. And we have a country out there, North Korea, which is sort of wacko, which is not a bunch of dummies, and they are going out and they are developing nuclear weapons. And wouldn’t it be good to sit down and really negotiate something, and I do mean negotiate. Now, if that negotiation doesn’t work, you better solve the problem now than solve it later.

Rep. Al Green & Friends, Give Up on Your Nonsensical Dreams of Impeachment!

Dinesh D'Souza: The Democratic Party's Non-Existent Apology for its Racism