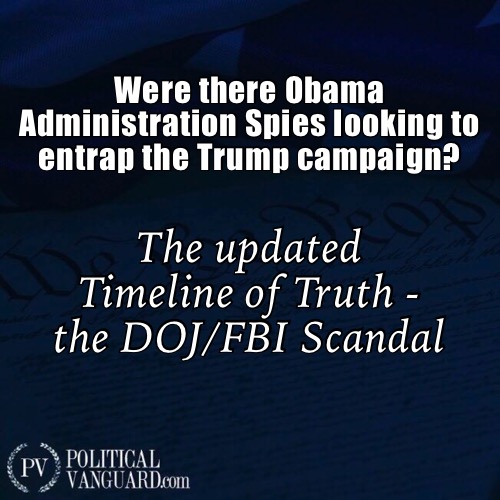 Early thoughts on the IG Report.

1. Keep in mind he is a “fact finder” and has the right to draw conclusions. He does not have the right to charge people with anything. He can only “refer” them for DOJ action.

2. A split-decision. The IG punted in many ways. The IG says rules were broken but the actions were not based on politics.

There are two elements here. The legal and the political.

a) The report undermines any claim of obstruction for Trump’s firing of FBI Director James Comey. It is clear Comey broke many rules. Indeed, Comey used a gmail account for official business (which is illegal) in addition to insubordination. Remember, Rod Rosenstein wrote a memo justifying Comey’s firing. The IG report bolsters the justifications. If Mueller later tries to claim obstruction by Trump for firing Comey (which legally he cannot do according to many), people will rightly be beyond skeptical.

Think about this too: Hillary broke the law (although not charged) using unprotected email server for classified information. Obama communicated with her on that server using a fake account (also a crime). Comey used an unsecure email. Comey’s finding that Hillary didn’t break the law using an unsecure email. Soooo, was it because he knew that ruling would apply to him and Obama? You decide.

b) The IG did not make a criminal referral against anyone in this report like he did against Andrew McCabe in the prior report. He could have waited on McCabe and put him in this report but the firing deadline for McCabe was in February. By doing that earlier, the IG may have taken some of the legal sting out of this report. Nevertheless, 5 employees were referred for further investigation and Simeon that relates to potential political bias.

a) The report concluded that the transgressions were not politically motivated. That is ridiculous.

PV’s Timeline of Truth (link below) proves that wrong.

Beyond that, consider Prter Strzok and Lisa Paige;

“Page: [Trump’s] not ever going to become president, right? Right?!

Or this silly exchange covered by the Daily Caller:

“I am so stressed about what I could have done differently,” the lawyer continued, apparently referring to the FBI’s handling of the Clinton email probe.

The attorney’s messages show that the was distressed at the FBI’s decision in October 2016 to re-open the investigation into Clinton’s emails. Democrats have claimed that decision hurt Clinton at the polls.

The FBI lawyer also suggested that he would work to resist the Trump administration.

“Is it making you rethink your commitment to the Trump administration?” one FBI lawyer wrote on Nov. 22, 2016.

Do you take that guy at his word?

AND REMEMBER, Comey reopened the investigation because he thought “Clinton was going to win the presidency and that she would be perceived to be an illegitimate president if the public first learned of the information after the election.”

Strzok, Paige, insurance policies, Comey, on and on. Read through the linked timeline – it’s pretty clear. It was political.

1) Dems will now say it is time to close the book on the Hillary email story. That is in contrast to their claim that Republicans in the House were wrong to end the Trump investigation.

2) This story will likely live on for some time and it places Hillary and Comey and Obama back in the news. Elections are about the future not explaining the past. As such, it takes away from the Democrats midterm’s focus.

1) There is enough in this report to keep pushing the issue to be sure and this is only a report – not a decision by a prosecutor . . . and don’t forget, there is still the issue of FISA abuse.

In short, welcome back to The Divided Era.

Read HERE for more information and Tom Del Beccaro’s most excellent and constantly updated timeline entitled, “How Biased FBI and DOJ Officials Broke the Law and Tried to Decide the Election”: http://politicalvanguard.com/biased-fbi-and-doj-officials-broke-the-law-and-tried-to-decide-the-election-an-annotated-timeline/

Tom Del Beccaro is a contributor for Forbes and the former Chairman of the California Republican Party. Tom is publisher of PoliticalVanguard.com, author of The Divided Era, The New Conservative Paradigm 1st Ed. & 2Ed., as well as a frequent talk radio and television commentator. Tom has appeared on Fox Business News and the Wall Street Journal’s Opinion Journal, as well as TV throughout California. For the last six years, Tom has made over 125 radio appearances a year across the country, including California, New York, North Carolina, Alabama, Georgia, Colorado, and national shows such as Lars Larson and the Dennis Prager Show.

Daniel Greenfield: Islamic Insanity and Muslim Madness in the Netherlands