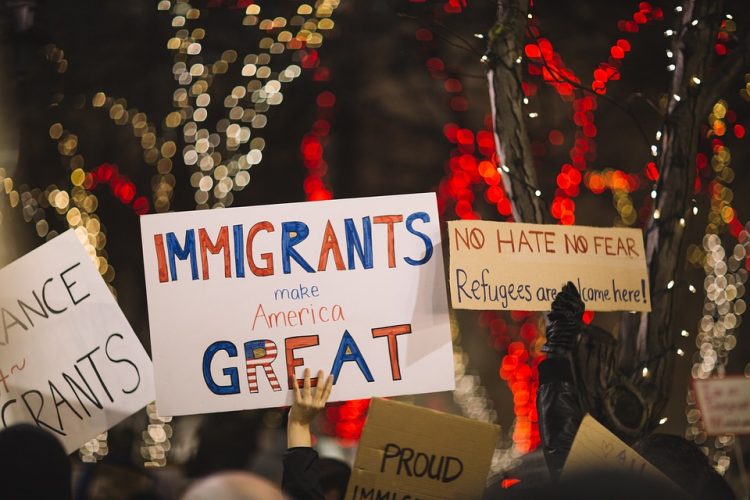 Earlier this week Rush Limbaugh opened his show by voicing this concern:

“If the media keeps this up — if they keep up generating this hysteria — somebody’s gonna get killed. I think we’re pretty close to somebody getting killed already, and I’m not being hyperbolic, and I’m not trying to call attention to myself. I’m genuinely worried about the out-of-control aspect of this. The news media’s fanning the flames. The news media is leading the way on this. It’s again an oxymoron. News media? There is no media, and none of this is news.”

The media (and the left) in this country has become totally deranged and full of hate and anger. They are reacting to Trump in ways that are unhealthy for our democracy. No doubt they are frustrated that Trump has been successful on many fronts and the Mueller investigation has turned up nothing on Russia collusion. But the whole issue of illegal immigration has sent them over the cliff this week. Many of them appear to have lost the ability for rational thought. I believe they have repeated their own lies about Trump so often that they have convinced themselves that they are true. And in their minds it gives them freedom to do anything necessary to destroy Trump. But as you will see below, they no longer just attack Trump. They are now going after his supporters, even a former NBA superstar.

We’ll start with Time magazine and their brazen cover. It shows a photo-shopped picture of Trump towering over a little crying girl that they claim was taken from her parents at the border. With glee the media ran with the story without bothering to check into it. If they had they would have found out the whole thing was fake. The girl had not been separated from her family as explained by Border agent Carlos Ruiz:

“We were patrolling the border. It was after 10 o’clock at night. We asked her to set the kid down in front of her, not away from her, she was right in front of her… So we can properly search the mother. So the kid immediately started crying as she set her down. I personally went up to the mother and asked her ‘Are you doing OK? Is the kid OK?’ and she said, ‘Yes. She’s tired and thirsty. It’s 11 o’clock at night.”

So obviously caught in a huge lie, what did Time do? They issued a retraction – sort of.

“The original version of this story misstated what happened to the girl in the photo after she taken from the scene. The girl was not carried away screaming by U.S. Border Patrol agents; her mother picked her up and the two were taken away together.”

“The June 12 photograph of the 2-year-old Honduran girl became the most visible symbol of the ongoing immigration debate in America for a reason. Under the policy enforced by the administration, prior to its reversal this week, those who crossed the border illegally were criminally prosecuted, which in turn resulted in the separation of children and parents. Our cover and our reporting capture the stakes of this moment.”

So in other words, fake but pertinent to our smearing Trump. And imagine illegal immigrants being prosecuted! Who would have thought? Time must have gotten Dan Rather to write that.

Next we move on to Morning Joe. I’ll admit I don’t like giving any attention to these two poor excuses for journalism but in this case it is necessary.

Joe Scarborough had this to say:

“He is a racist. He is blatant about his racism. He is not using a dog whistle to send out his racist messages. He is using a foghorn. And anybody that cheers for what he is saying about Mexicans being breeders, about Hispanics infecting America, about people who are not white infecting America, about — denying that he knows who David Duke is, denying that he knows that the KKK was a malignant force in American history, equating Neo-Nazis and white supremacists to democratic protesters, trying to undo democratic progress across Europe. You cannot support this man and just look at the tweets that you want to look at, Mika, and ignore all the other racist comments.”

Trying to undo democratic progress across Europe? What in the world is he talking about??? How much longer is it going to be before he finally snaps completely? I wonder if Joe is upset because Trump no longer tweets about him and is basically ignoring him?

MSNBC contributor Donny Deutsch appeared on the show and had this to say:

“This can no longer be about who Trump is. It has to be about who we are. If we are working towards November, we can no longer say Trump is the bad guy. If you vote for Trump, you’re the bad guy. If you vote for Trump, you are ripping children from parents’ arms. The mistake that we’ve made in the past is, ‘Look at that bad guy over there, look at that bad guy.’ What the Democrats have to do is make the next election a referendum on not who Trump is, but who you are. That’s the big difference. You can no longer now as a voter — because it’s not about taxes, it’s not even about some abstract term of immigration or nationalism. If you vote for Trump then you, the voter, you, not Donald Trump, are standing at the border, like Nazis, going ‘you here, you here.’ And I think we now have to flip it. It’s a given the evilness of Donald Trump. If you vote, you can no longer separate yourself. You can’t say ‘well he’s okay, but.’ And I think that gymnastics and I think that jiu-jitsu has to happen.”

This is beyond irresponsible journalism. This is a threat and call to action against Trump supporters.

And earlier this week the opposition to Trump moved beyond words into a physical protest at Secretary Kirstjen Nielsen’s Home (this after being targeted at a restaurant 2 days before):

Peter Fonda: “Kristjen Nielsen is a lying gash that should be put in a cage and poked at by passersby. The gash should be pilloried in Lafayette Square naked and whipped by passersby while being filmed for posterity.”

What a disgusting human being! And where is the #MeToo movement. Nothing but crickets. And why weren’t these people arrested? They were on private property!

And finally, as I mentioned above, sports-figures are not immune to the wrath of the left. Former Boston Celtics superstar Kevin McHale was attacked this week. What sin did he commit? Why, he apparently attended the Trump rally in Duluth. The MONSTER!

Nathaniel Friedman: “Kevin McHale is extremely stupid for attending a public Trump event. That, as much as his politics, is why he should never work in the NBA again.”

Proving the left are the most intolerant people on the planet.

Mikel Jollett: “Hall of Fame Celtic Kevin McHale and his wife attended a TRUMP rally? You’re an analyst in a sport that is 75% black. You literally make money off the hard work of black athletes. Is this real? If so, he’s gonna have a rough week.”

Could someone please tell this clueless person that black unemployment is at the lowest it’s been, EVER!

And by the way, Kevin McHale is gay. So much for the left supporting his LGBTQ(WXYZ) rights. If you’re gay, transgender, bi-sexual etc AND a liberal the message is “Welcome!” If not then it’s “Go to hell”.

The best response to this came from turtleboysports:

The fact of the matter is that the left has become 100% fascist. And until moderate liberals step up and take back the party of Roosevelt, Kennedy, and Truman, these speech Nazis will control the democratic party. The people saying this s*** about Kevin McHale aren’t some extreme radicals in the party. These are established writers that Twitter has deemed relevant enough to get a blue checkmark.

This is not how a democracy functions. And as long as the left continues to allow people like this to be their spokesperson, I will continue to vote for whoever they hate the most.

Incidents like these are no longer isolated. They are increasing in number and intensity. The left is showing everyone that they are the most bigoted, intolerant, crude, hate-filled and angry bullies in America. If something is not done to stop this then someone IS going to get hurt or worse. And they will be responsible for it.

“I have no sympathy for these people that are in this administration who know it’s wrong for what they’re doing on so many fronts. They tend to not want to confront this president or even leave, but they know what they’re doing is wrong. I want to tell you, these members of his cabinet who remain and try to defend him, they won’t be able to go to a restaurant, they won’t be able to stop at a gas station, they’re not going to be able to shop at a department store. The people are going to turn on them. They’re going to protest. They’re absolutely going to harass them until they decide that they’re going to tell the president, ‘No, I can’t hang with you.’ This is wrong. This is unconscionable. We can’t keep doing this to children.”

This is outrageous. The left in this country are the bullies and they prove it more and more every day. And as I said above, they will be held to blame if someone gets hurt.

Why We Believe in Angels Was Proven Again Today

Prager University: What is Intersectionality (and Why We Should Care)