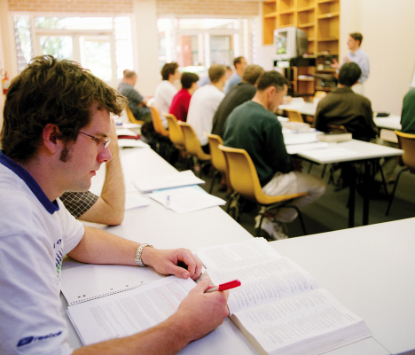 The June 14th issue of Education Week includes an article by Steven Sawchuk entitled, “A Bold Effort to De-Track Algebra Shows Promise” which describes the difficulties and alleged successes of a “new” approach to math curriculum spurred on by the adoption of the much-maligned Common Core State Standards (CCSS) introduced in 2010.

The theory behind the “de-tracking” of math courses within the high-school curriculum seems to be that some students are unable – based on minority status – to handle 8th grade algebra (where algebra has traditionally been as a starting point for higher mathematics) so everyone needs to mark time in eighth grade in order to allow all the low-achievers to “catch up.” Gee, here I thought it was the leftists always shouting about right-wing racism. Oh, that’s right, leftist transference is alive and well. Accuse others of what you, yourself, are guilty of, but I digress. The featured aspect of this new way of teaching struck me the most. Group problem solving is the major buzz-word in education today. I often wonder if this is just a way to make the kids teach themselves instead of the teacher doing what their title implies.

Unfortunately, this incessant striving on the part of progressive educators to come up with a formula that puts thousands of kids from diverse (both ethnically and economically) backgrounds into the public school “Chute” and stand at the other end of the system expecting every student to come out the other end with a uniform 140 IQ and a yearning and capability to perform well at an ivy league school is simply insanity. It is also both destructive to those with a gift for a career in STEM fields and a source of disappointment for those students who have been told that this new way of teaching will solve all their shortcomings brought on by that evil “white privilege” thing. It simply comes down to a desire to tear down anything traditional or classical and replace it with something that reduces everyone to one level – mediocrity. This is the true evil within the progressive philosophy that has so deeply permeated the field of education in America – equal results rather than equal opportunity. Contrary to what many of this mindset refuse to accept is that there are countless examples of minority students who excelled and built distinguished careers in both technical careers and the humanities. The same alleged prejudices existed as they travelled their path to success as are faced by minority students today. However, the same roadblocks that are encountered by minorities are often present in the path of white students as well.

My own personal story might well be illustrative. My mother was divorced when I was two years old. She raised me and my older brother while working part-time, moving in with my grandparents to make that possible so that when we got home from school, she was there. She was NEVER not involved in our lives. We didn’t have much since her income at the time was about 95 cents per hour working as a sales clerk at Sears. I enlisted in the Air Force at 17 after getting barely passing grades in high-school (not because of my ability, but because I blew it off as unimportant. Math was my nemesis, too. That was in 1965. I never saw a college classroom until 1976, finished an AA in 1978 while working full-time. I progressed through many jobs that eventually led me to losing the job of my dreams to “down-sizing” in 1992. Being a middle-manager with an AA degree was a formula for unemployment in those days. Back to school after taking a 40% cut in pay to keep working. Bachelor’s degree by 1995 and Masters by 1997. Another 20 years running a business and here I am…retired. It was exhausting just to write about it.

The point I am making is that “white privilege” had nothing to do with who I am or where I took myself. I still pay on student loans that will outlast my lifetime. There was no such thing as equity back then. It was up to the individual to work for what they needed and wanted out of life. That lesson seems to have been lost somewhere between Johnson’s War on Poverty and CCSS. The whole idea of equality of outcomes – “Equity” as it is known these days – is simply destructive and dare I say demented.

Equity will wind up being the headstone of our country. What Education-types need to accept and tell their left-wing mentors to accept, as well, is that not everyone in this world is capable of college-level mathematics (I was one of those). Some students, when they leave high-school should not be headed for the ivy league. Attempting to homogenize society into a group that uniformly ends up with that effective IQ of 140 is not going to happen. Twisting the curriculum into mediocrity does a serious dis-service to those who were given a gift while re-enforcing in those less gifted that they are “also-rans.” This has nothing to do with whiteness or blackness or brown-ness. It has to do with nature as well as nurture. Student success can be a factor of heredity, parent involvement, and/or genetic luck. None of which changes based on the curriculum.

PolitiDudes Discuss: If the Future is Female, What Does That Mean for Fathers?

The Dangers of Journalistic Malpractice: Do They Even Have a ‘Code of Ethics’ Anymore?