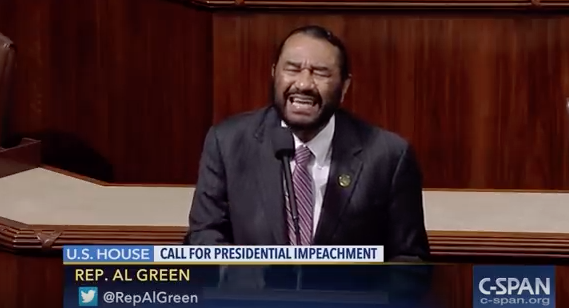 On Tuesday, June 12, Congressman Al Green held the first completely eye-closed press conference in history. During the 17 minutes or so that he spent at the lectern speaking ominously about the “high crimes and misdemeanors” committed by President Trump, he did so with his eyes closed. Perhaps he didn’t want to see the flashes of the press cameras, but it is more likely because he was avoiding reality, dreaming, having a psychotic break, or otherwise hallucinating over things he wishes were so rather than things that are.

You see, Congressman Green, and his not clearly identified side-kick (first name Sherman), another leftist Congressman with whom he has partnered for this venture into the absurd, while claiming to have researched the constitution and federal laws for weeks or months, have come to the conclusion that the firing of James Comey – someone clearly, at this point, guilty of perjury – by President Trump can be elevated to the level of said “high crimes and misdemeanors” by calling it “obstruction of justice.” But obstruction of justice is when one commits an illegal act that results in justice being obstructed.

During the press conference, Congressman Green alluded to the firing as being motivated by personal fear of the Mueller investigation and anger over Comey going after General Flynn. However, there is not one statement, action, or witness that can look into the mind of another person and discern the validity of that allegation. It is purely speculative conjecture. He may believe it to be true, but he has not one shred of evidence to support it.

Meanwhile, the continuing effort of ill-advised Democrat leftists to undermine the Trump Presidency in every manner imaginable is doing more damage than good to our country and the ability of President Trump to do the job the American people elected him – legally, I might add – to do. For my money, given these efforts to obstruct him, he has been doing far better in 17 months than Barack Obama did in eight years.

There are two other reasons for one to call this lame effort on the part of House Democrats to conjure up an impeachment petition against President Trump.

It is pretty clear to me that timing of the press conference was an exercise in diverting the main stream press away from the successes of the Singapore Summit while attempting to cast another shadow – imaginary at best – on a President that is getting things done that leftists don’t like.

It is also clear that Congressman Green has no intention of following through on his threat to file articles of impeachment because he knows he doesn’t have the vote now and will likely never have them.

Could it be that Congressman Green and his cohort are grand-standing (campaigning) on nothing more than an “anti-Trump” platform because they’ve got nothing else to justify their existence? I Think I’m on to something here.