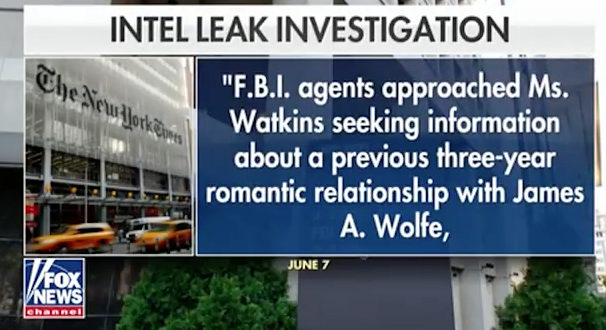 In December 2013, an unknown journalism student at a second tier college broke a major story using anonymous sources associated with the Senate Intelligence Committee.  Ali Watkins earned a Pulitzer nomination for that story, and her career rocketed from college coed to New York Times reporter in three short years.

Recently, the FBI subpoenaed years’ worth of Ms. Watkin’s emails, texts and phone records with the former Director of Security for the Senate Intelligence Committee, 58 year old James A. Wolfe, in connection with the FBI’s ongoing investigation of leaks from that committee to journalists.

Wolfe and Watkins had a three-year romantic relationship beginning when she was still a student.  The timing of this romance appears to coincide with Ms. Watkin’s meteoric rise to journalistic success and her curious access to anonymous sources within the Senate Intelligence Committee.

Wolfe served as the Senate’s intelligence panel security director for 29 years and maintained all classified information flowing from the Executive Office to the panel.  The FBI is investigating possible leaks.

Denying that Wolfe was her source for stories, Watkins explained her promotion to the New York Times in her college newsletter:

“It’s more of just showing up at the odd hours when no one else is showing up. Showing up all the time and eventually running into somebody who knows something.”

Wolfe exchanged with Watkins thousands of emails or texts, and often daily phone calls.  Wolfe would also meet Watkins at her apartment.

In a provocative message to Watkins in December 2017, Wolfe stated:

“I’ve watched your career take off even before you ever had a career in journalism. … I always tried to give you as much Information (sic) that I could and to do the right thing with it so you could get that scoop before anyone else. … I always enjoyed the way that you would pursue a story, like nobody else was doing in my hal1way (sic). I felt like I was part of your excitement and was always very supportive of your career and the tenacity that you exhibited to chase down a good story.”

The timing between Wolfe’s communications and Watkins’ publications raises the speculation whether a connection existed between Watkin’s scoops of sensitive information and her romantic relationship with Director Wolfe, a man more than twice her age.

The DOJ has indicted Wolfe for lying to the FBI about his contacts with journalists and is suspected of leaking classified information.  Prosecutors claim Wolfe misled agents about his relationships with multiple reporters.  This is part of the ongoing investigation of leaks of classified information from the Senate Intelligence Committee which has plagued the Trump Administration.

As yet it is unknown whether Wolfe leaked classified information to Watkins.  Regardless, their relationship invokes concerns of journalistic ethics of government sources having romantic relationships with reporters.