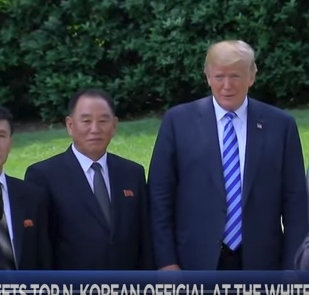 Earlier in the week I got confused when I heard that President Trump had met with Kim at the White House. I thought “When did this happen?”. But then I realized he was meeting with Kim Kardashian!

However, after meeting with North Korean envoy Kim Yong Chol later in the week, President Trump did announce the meeting with Kim Jong-un in Singapore on June 12 is back on (as I predicted it would be).

“I think we would be making a big mistake if we didn’t have it. I think we’re going to have a relationship and it will start on June 12th. I think they want to do something and if it’s possible, so do we. It’s a process, we’re not going to go in and sign something on June 12th. We never were.”

This is starting to feel like 1985 and Reagan’s first meeting with Gorbachev.

Trump also described it as a “getting to know you meeting”. Maybe we can call it “The Kim and I”. I wonder if they’ll be wearing name tags?

While Trump won’t get any credit from the media and the left, this is just another example of Trump’s successful negotiation tactics that are spelled out in “Art of the deal”. The media “could” read that at any time and understand what’s going on. But I guess it’s just much simpler and easier just to attack Trump from a position of ignorance. And of course they did.

Bianna Golodryga, CBS News correspondent:“What went from a June 12th summit focused on speedy denuclearization, has turned into a “get to know you meeting”. Hard to see how this is interpreted as anything other than a huge win for Kim Jong-Un.”

Michael D’Antonio at CNN (after Trump had originally canceled the meeting): “Trump’s methods worked when there was little more than a property development or the next day’s headlines at stake. But as he approached North Korea with the same technique, it became obvious he was out of his depth. As other parties manipulated him, Trump looked like the monkey-in-the-middle in a game of keep-away played in a schoolyard.”

The media sure is taking on the caricature of Wiley E. Coyote.

In his remarks yesterday, Trump also spoke to the United States involvement in re-building North Korea:

“I don’t think the United States is going to have to spend. South Korea will do that. I think South Korea will do it. I think China – I think, frankly, China will help out. I think Japan will help out. I don’t see the United States spending a lot of money. We have three hostages – how much money did we spend on the hostages? Look, we’re very far away. We are very far away. Those places are very close; that’s their neighborhood. We’re 6,000 miles away, so I already told South Korea, you know, you’re going to have to get ready. Japan also. And I think they really want to see something great happen. Japan does, South Korea does, and I think China does”

This is a huge (Yuge?) break from the past modus operandi of U.S. Foreign policy. And a refreshing one. Why should we spend billions of dollars rebuilding a country that it’s neighbors are capable of doing themselves. What a novel concept!! This statement is also typical Trump. He’s alerting other parties (China, South Korea, Japan) what he expects them to do as part of the negotiations – i.e. putting them on notice. Trump uses this tactic often and has benefited from it. It is part of the art of the deal. In the end we will probably spend “some” money on North Korea but only after the other countries have stepped up to do their part.

So the summit is back on for June 12. And don’t tell the left, but Trump may also be having a summit with Putin soon. I don’t think they could handle it.

Prager University: Trophies Are for Winning!