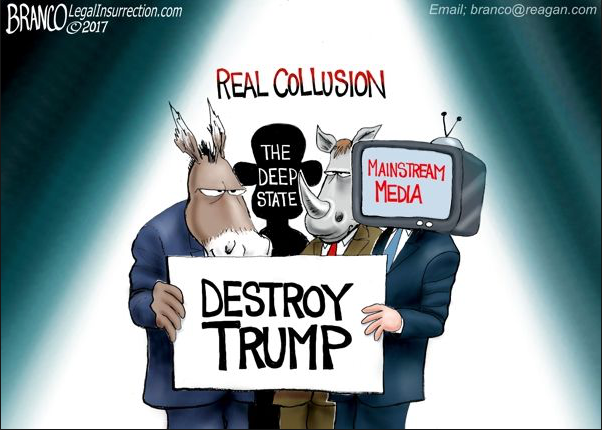 We all have been treated to daily or even hourly internet notifications, TV newscasts, print news, and radio broadcasts, etc.  about President Trump having to deal with the Deep State’s efforts to remove him from office by just about any means. The Deep State are low lives left over from the Obama administration’s still deep swamp.

Former FBI Director and close friend with fired (for just cause) FBI Director James Comey, Robert Mueler seems to be a point man in this very public assault on the office of the President. Mueler is a Trump hater as are the dozen or so high-priced attorneys working with and for him trying desperately to find if, where, when, or how our duly elected President Trump worked with the Russians to undermine Hillary Clinton’s failed presidential campaign. Mueller seems to have failed miserably. He has netted a couple of hangers-on and a crook or two who are in the distant periphery.

After more than a year, Mueller & Co. have drawn a blank regarding President Trump colluding or having any direct involvement with Russians – President Putin, Russian political hacks, or other Russians in undermining Hillary Clinton.

There is no doubt that Mueller & Co. have had multitudes of bits and pieces of solid, hard evidence that Hillary has worked with Russians to bolster her position, assault President Trump, raise tons of money both legally and illegally, sell American strategic uranium supplies to the enemy, and more things of a very serious nature that is both criminal and tratorus slap them in the face. And, they seem to be ignoring what is likely clear culpability on the part of Hillary and her gang.

A recent revelation is that the FBI, with former and increasingly discredited and cunning President Obama’s knowledge and blessing, had installed at least one FBI spy in President Trump’s campaign. Yeah, the FBI with the sanctioning of the Democratic White House’s leadership had violated every principle of decency and probably many laws to spy on the campaign of Hillary’s opponent. President Trump rightfully declared that this is UUUUGE! This is far, far bigger than Watergate. President Trump demanded a very serious investigation into this by a very reluctant Department of Justice headed by Jeff Sessions who is a very questionable if not smelly and murky party in this entire affair. Members of the Congress are rightfully ringing the fire bell and appropriately demanding another Special Counsel to investigate this.

Enter another fetid swamp dweller who belched to the top of the flotsam, former CIA Director and career spook John Brennan who became slightly unhinged after the President called for an investigation into the spying.

Brennan went off the rails when he ominously went after (some claim that it was a threat) House Speaker Paul Ryan and Senate Majority Leader Mitch McConnell with: “If Mr. Trump continues along this disastrous path, you will bear major responsibility for the harm done to our democracy.” “You do a great disservice to our Nation & the Republican Party if you continue to enable Mr. Trump’s self-serving actions.” This was clearly meant to tell them to derail President Trump. This constitutes a serious threat to those two men and to our precious republic.

Most of the readers here may be familiar with what often used to be reported, a Coup d’ Etat – the sometimes bloody overthrow of a government, usually by force of arms. Brennan effectively called for a bloodless Coup d’ Etat to remove a sitting U.S. President. Brennan is no doubt very familiar with Coups d’ Etat because of his CIA work.

Now, the Mueller gang and especially the media have been yammering about what they claim is Presidential collusion. Well, this gang of swamp dwelling flotsam are seriously colluding (scheming, plotting, conspiring) to illegally remove by a Coup d’ Etat the sitting President of the United States.

The list of the swamp bilge conspirators is substantial. It starts with Barak Hussein Obama, and includes Hillary and Willie, James Comey, Andy McCabe, Loretta Lynch and Eric Holder, Brennan of course, along with James Clapper, John Podesta, Robert Mueller, Valerie Jarrett, and the Strzok/Paige love birds. The nature of Brennan’s letter may have indicated that Speaker Ryan and senator McConnell might have a connection with the bilge.

The Department of Justice has been “slow walking” as in delaying any reports to the Congress that is needed to help the Congress’ own Coup d’ Etat investigations into the collusion, plotting, scheming to destroy President Trump and quite possibly our increasingly fragile republic.

With the level of collusion, scheming, and plotting between the Justice Department and the FBI, it is unlikely that the Department of Justice can or will adequately investigate the badly compromised FBI.

The Department of Justice has been waving the proverbial middle finger at the Congress. There must be a consequence for this terrible behavior. Would the DOJ similarly wave the finger at a special prosecutor?

It seems that Attorney General Sessions is “missing in action” in this regard, unless he is controlling the finger.

President Trump has been extremely patient throughout this whole national ordeal. Will his patience with all of this Coup d’ Etat plotting, scheming, and planning run out? What consequences will be levied on these traitorous criminals if they continue along this disastrous path to harm our republic?

Prager University: Are Some Cultures Better Than Others?

Prager University: Trophies Are for Winning!