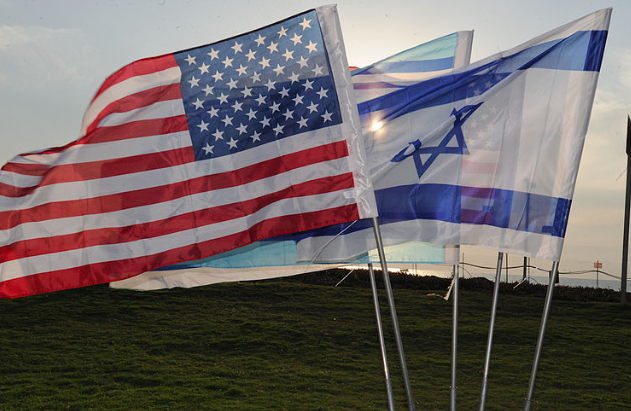 President Trump boldly moved the embassy to Jerusalem. And a poll shows a nearly even split among American Jews opposing and supporting it, while 85% of Israeli Jews back the courageous decision.

77% of Israelis back Trump’s handling of US-Israel relations while 57% of American Jews disapprove.

How can the vast majority of Israelis be happy with the relationship while the majority of American Jews aren’t? The answer gets at the heart of the split between what American and Israeli Jews want from Israel. And also to the root of a deeper split within the Zionist tree.

Positive Zionism was the movement of a cultural, religious and national minority to reclaim an independent identity and unleash the potential of the Jewish people. Negative Zionism was a reaction to anti-Semitism. And then, when Zionism became safe, it became a trophy of communal respectability.

Now that Zionism is no longer safe or respectable, the trophy is in the communal dumpster.

Positive Zionists are self-directed, but negative Zionists are other-oriented. Their Zionism is only another bid for approval from the same people and political movements whose rejection made them Zionists.

The Israeli left began as a series of movements that embraced Zionism because the Communists (and other Socialists) had made it painfully clear that there was no room for an independent Jewish socialist movement in what would become the USSR. So they launched their Socialist experiments in Israel while slavishly worshiping Stalin. Some were even willing to launch a revolution in Israel for Uncle Joe.

And that’s why the Israeli left has been going electorally extinct for a generation.

Most Israelis don’t care what the Socialist International thinks of them. The most other-directed Israelis are usually the ones who already spend more time in Paris, London and Los Angeles than in Jerusalem. The average Israeli is a positive Zionist who doesn’t even think about it. He just lives a Zionist reality.

Negative Zionists dominate diaspora organizations. But those organizations value respectability more than Israel. They want to be proud of Israel because they’re ashamed of being Jewish. And they are pathetically vulnerable to the anti-Israel lobby’s weaponization of Jewish shame. Air strikes on Gaza, New York Times editorials and protests by anti-Israel hate groups deprive them of their respectability.

Modern Zionism began as the battle cry of an oppressed minority. But then it became respectable. The communal leaders and organizations that once despised it used its bright gleam to add a little luster to their wardrobe. And then toss it overboard the moment that it detracts from their respectability.

That is who tends to speak for American Jews. These are the unelected leaders who deliver ultimatums to the Prime Minister of Israel. They wring their hands over Gaza and assent to the Iran nuke sellout.

When push comes to shove, they will always do the respectable thing. Not the Zionist thing.

The Zionism of respectability is about being able to read the New York Times and feeling good instead of feeling ashamed. Many American Jews are easily shamed. But Israeli Jews are almost impossible to shame. Unlike Jews abroad, they’re not a minority group constantly looking around for approval.

Zionism without chutzpah is unsustainable.

The future of American Zionism is to be found among Jews who don’t care about respectability. They’re either from insular religious communities or have the same tough Queens attitude as Trump.

Those are also the Jews most likely to support Trump.

The anti-Israel lobby weaponizes Jewish insecurity. Its activists and reporters exploit Jewish shame. Its politicians openly employ dual loyalty language and dog whistles. And its spinmeisters package appeasement as respectability. Even if that respectability comes at the cost of the destruction of Israel.

The peace process, which has killed and crippled thousands of Israelis, created two terror states inside Israel, and put Jerusalem and Tel Aviv under fire for the first time in a generation, is respectable. The Iran deal was respectable. Suspending it wasn’t. Blockading Hamas is shameful. Opening the border with Gaza is respectable. No matter how many Jews die. Being critical of Israel is respectable. Supporting it is tribal, narrow-minded and disreputable. And they don’t want to be seen as any of those three.

Those American Jews who continue to support Israel will be immune to media shaming. They won’t look for mainstream respectability. Instead they will become more Zionist because it is disreputable.

Trump’s support for Israel is bad for its respectability. Respectable Jews would rather not have the embassy moved at all if Trump had to be the one to do it. They are critical of everything that Trump does because that’s the respectable thing to do. When they worry about being suspected of dual loyalty, they don’t mean to America and Israel, but to the progressive cause and to the Zionist reality.

As long as the left controls the cultural high ground, it gets to define respectability. And so respectability invariably becomes an echo of its views. Only those who defy that echo chamber will remain pro-Israel.

Many pro-Israel groups claim to be working very hard to escape this trap. But there is no escape.

The left’s anti-Zionism is over a century old. Within the left, pro-Israel positions are usually found among moderates. The uncontrolled leftward turn of what used to be liberalism makes its anti-Zionism inevitable. Any correction would require reversing that leftward turn, not attempting to befriend it as the ADL and other groups have been futilely trying to do. And such a correction is not currently realistic.

Negative Zionists will have to experience anti-Semitism personally before they’re likely to turn. And they won’t make that adjustment over Israel. But the day will come when the left takes away their respectability even if they denounce Israel and subscribe to the New York Times. As Corbyn and the UK Labour Party show, anti-Zionism as a movement is just anti-Semitism wearing a funny hat. The two are joined at the hip. Where you’ll find one, you’ll soon find the other dooming Jewish respectability politics.

Israeli Jews have a more uncomplicated view of reality. Anyone who hates them, hates them. It’s American Jewish groups who wonder whether they are hated abstractly, personally, politically, religiously, nationally or culturally. And then they figure out that it’s usually all the above.

Defying bigotry in any age requires courage. That’s how Zionism was born.

Zionism was never a solution for those too timid to defy convention. It is not the pathway to respectability. That brief moment passed decades ago. It probably won’t come back.

In the decades to come, Israel will have to make some hard decisions. And the American Jewish organizations trying to balance the impossible demands of respectability and Zionism won’t like them. But as the moderate Democrat goes extinct, the constituency for negative Zionism will fade away.

Positive Zionism however will remain.

American Jews remain split between respectability politics and aspirational politics. But the future belongs to those American Jews for whom Zionism is not a source of social approval, but defiant pride. In the near future, American Zionism will cease to mean rubber chicken dinners and mindless clichés. Instead, as it already has in France, it will once again become the battle cry of an oppressed minority.

Those American Jews who have the courage to be Zionists will also be bold enough to stop being Democrats, to turn off NPR, unsubscribe from the New York Times and thumb their noses at society.

A Liberal Has a Moment of Insight Into Pres. Trump