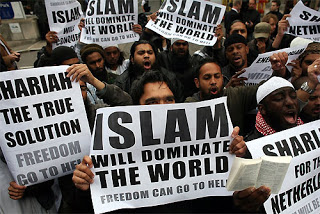 We ask that the verses of the Qur’an calling for the killing and punishment of Jews, Christians and unbelievers be rendered obsolete,” the manifesto states.

It cites the murders of Sarah Halimi and Mireille Knoll, two elderly Jewish women murdered by anti-Semitic Muslim thugs, the fact that “French Jews are 25 times more likely to be attacked than their fellow Muslims”, and the ongoing ethnic cleansing of Jews from the encroaching no-go zones.

“10% of the Jewish citizens of Île-de-France – that is to say about 50,000 people – were recently forced to move because they were no longer safe in some cities and because their children could not attend the schools of the Republic,” it courageously warns.

“This is a quiet ethnic cleansing being carried out in in the country of Emile Zola and Clemenceau.”

The manifesto was written by former Charlie Hebdo editor Philippe Val, who had republished the original Mohammed cartoons from the Jyllands-Posten despite the threats, both terroristic and legal, and its signatories include former president, Nicolas Sarkozy, the former mayor of Paris, Bertrand Delanoë, famed singer Charles Aznavour, actor Gérard Depardieu, and many other significant figures.

The moral power and the importance of the manifesto should not be underestimated.

After 9/11, it was American Jews who brought attention to the plight of French Jews while their community leaders often preferred to remain silent. Now it is French Jews who speak out, who march and whose LDJ even confronts Islamic thugs in the street while American Jews keep quiet or collaborate.

The despicable alliance between AJC and ISNA, and the ADL’s attack on Canary Mission, carry with them the stench of Vichy on the spring wind. When an Islamic terrorist attacked a Kosher supermarket before the Sabbath, asking his victims if they were Jewish before he shot them, Obama dismissed it as a random attack on a “bunch of folks in a deli.” It’s become virtually impossible in the United States to have a discussion about Islamic anti-Semitism without being denounced as an Islamophobe.

Why did France and America trade places? France has faced worse terrorist attacks in recent years than we have. But, more significantly, it lacks the politically correct viewpoint consolidation of America. Despite certain views being criminalized, there are all sorts of non-traditional views in public life there that are actively debated, instead of being airbushed or silenced the way they are in the United States.

Neither the manifesto nor Charlie Hebdo could exist in the United States. The media in this country censored the Mohammed cartoons more vigorously than the Europeans did. Without any legal threat.

And yet, despite its moral courage and its vital message, the manifesto misses the true nature of Islamic anti-Semitism.

It’s a lot more than a few verses.

The verses are part of a larger Islamic narrative. They’re not random outbursts, but a story. And that story is the primal conflict between Mohammed and the Jews. It begins with the massacre of the Jews at Khaybar and concludes with an end of days that can only come when Muslims exterminate the Jews.

It’s not a few intemperate verses. Anti-Semitism is fundamental to the story of Islam. And that story with its visions of a conquest sweeping across the world has not ended. That’s why the violence goes on.

Jews and Christians have a paradoxical role in Islam. They are on the one hand, People of the Book, the unacknowledged originators of the ideas and texts that Mohammed looted to found Islam. But their precedence is removed by accusing them of having betrayed Allah and perverted the scriptures.

When Jews and Christians gained independence or won battles, it called the truth of Islam into question.

That, rather than a few verses, is what we are dealing with. The verses remain relevant to those Muslims who believe that they are in a zero-sum struggle with every other religion on a battlefield whose scope is as large as the planet and as small as a neighborhood or a building. And that’s the vast majority.

You can try to make an idea obsolete when it’s no longer relevant. But the anti-Semitic hatred in almost every country where Jews and Muslims both live shows that anti-Semitism remains quite relevant.

Hating Jews, attacking them and even killing them, remains a meaningful part of Islamic identity.

The Jews were a primal Islamic enemy. That enmity is written into Islamic scriptures, traditions and prayers. All of that can’t be made obsolete because the Islamic conquest is an ongoing project.

It’s not a few verses. It’s the context of the conquest. That’s the mission at the heart of Islam.

The Lebensraum and Drang Nach Osten of Islam might pause for periods, but it never actually stops. Iraqis, Pakistanis and Somali migrants pour into Europe seeking Lebensraum. They move into poorer areas associated with immigrants bringing them into contact with earlier Jewish communities.

When the second generation, usually more prone to supremacist violence and expansionism than its immigrant forebears, comes of age, the Jewish communities are violently driven out of their homes.

The verses that justify it won’t become obsolete until the modes of behavior behind them lapse.

Calls for the persecution of Jews and Christians won’t be outmoded relics of another time until Muslims make them so, not by changing words, but by changing deeds. The trouble is that the verses remain entirely relevant because Muslim populations around the world continue to fight religious wars.

Muslim hatred of Jews has unique elements. As anti-Semitism usually does. But it’s still a subset of an Islamic supremacism and xenophobia that is endemic and whose consequences can be seen in clashes between Muslims and Christians in Nigeria, Muslims and Hindus in Kashmir, Muslims and Buddhists (and Hindus) in Myanmar, Muslims and Yazidis in Iraq, Muslims and Zoroastrians in Iran, Muslims and Atheists in Bangladesh, and those are just a few of the many examples around the world.

Islam is not on good terms with any other religion. Including its own spinoffs, like the Bahai, or its own subdivisions, like the Sunnis and the Shiites.

It’s not about the Jews. It’s about Islam.

The truth of Islam is validated by violence. Its theological disputes are settled by force.

The verses about Jews and Christians are not the problem. They’re a symptom of the problem. As are the terrorist attacks, stabbings, shootings, bombings, no-go zones, sharia police and sex grooming gangs.

The response from Muslim clerics in France to the manifesto has been to claim that the verses are meant to be seen in the context of their time and that Islamic wars are only defensive. Historically, that’s nonsense. But everyone would be perfectly happy if they believed that and really lived it.

Instead Islamic violence is always deemed to be defensive. Peace can only come from victory, not co-existence. War with non-Muslims who don’t submit to Sharia law is seen as inevitable and necessary.

The verses libeling Christians and Jews, and justifying violence against them, are just rationalizing this fundamental Islamic worldview and applying it to specific targets. Islamic anti-Semitism is born of Islamic supremacism and imperialism. Muslims aren’t persecuting Jews just because of anti-Semitic verses in the Koran. They’re persecuting Jews because the Koran is supremacist and imperialistic.

Like the Yazidis, Jews are a tiny minority and more vulnerable. That’s what makes them the canaries in the coal mine of Islamic migration. Muslim attacks on Jews in Europe date back over a generation. Long before Paris, Brussels and London were being regularly terrorized; European Jews had already retreated into fortified synagogues, stopped wearing Jewish clothing in public and maximized their security.

That was the canary in the coal mine. If Europe had woken up then, it wouldn’t be choking now.

American synagogues and Jewish institutions are starting to resemble their European counterparts. A decade ago, armed guards were a rarity outside synagogues. I walk past them all the time now.

The French manifesto is an imperfect effort to call attention to a burning problem. It’s an attempt to start an urgent and necessary conversation in France that can’t even be had in the United States.

And it’s a conversation that we must have before civilization chokes in the coal mine.

Prager University, Adam Carolla: Nobody Really Cares How You Feel