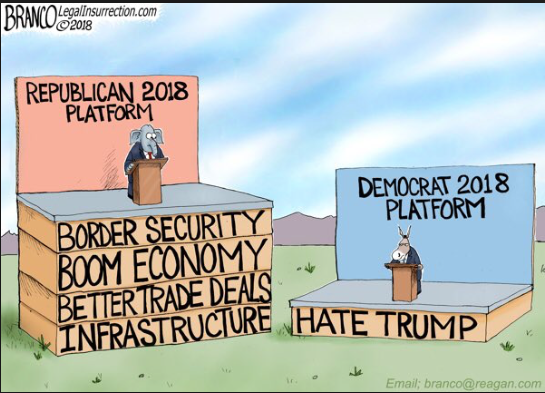 “It is time to stop the pursuit of personal destruction and the prying into private lives and get on with our national life,” President Bill Clinton once declared.

But switch on CNN or flip through the Washington Post and you will find the non-stop politics of personal destruction accompanied by Fortune 500 ads. Clinton supporters in the media aren’t just obsessed with Stormy Daniels or Russia conspiracy theories, but with destroying the lives of Trump supporters, from cabinet members to a random New York lawyer who once donated $500 to Trump.

Bill Clinton may have popularized the politics of personal destruction, but practicing its politics cost Hillary Clinton the ’16 election. Hillary’s message was that her opponent was a deplorable bigot who would move the White House to Moscow. Millions of Americans left behind by the crony socialism of the Obama economy and looking to change the change were not impressed with her hateful message.

And now the Democrats are making the same mistake all over again.

While the Republicans talked about the economy, the Democrats turned over their messaging to CNN, the Washington Post and the rest of the #resistance. While the media tethered its news cycle to Stormy Daniels and her lawyer, the economy boomed and tax cuts delivered. The Democrats went into spring with a solid advantage on the midterm ballot. Then the GOP broke even and has now taken the lead.

CNN thinks that the Stormy Daniels sleazefest matters, but even a majority of Democrats disagree.

The politics of personal destruction are deeply compelling to people who already believe that their opponents are utterly deplorable and must be destroyed. These days that’s the entire media and most of the beautiful people in the blue states who have the cultural influence and the real power. That’s why the media is a non-stop roll of interviews with Stormy’s lawyer, flowcharts of Russian conspiracy theories and breaking news reports claiming that EPA administrator Scott Pruitt eats stale bagels.

The #resistance demographic of yuppie urban elites made old media properties like the Washington Post and the New York Times profitable. CNN temporarily experienced a boom. #Resistance yuppies and hipsters weren’t very electorally significant as voters (except when they donated to obscure candidates in red state special elections), but they had lots of money to spare. That’s why media advertisers were willing to pay big bucks to reach them. And why the media kept feeding them anti-Trump clickbait.

In ’16, the media made the unwise decision to ignore everything except the big blue urban and suburban bubble. In ’18, it’s back to pandering to its bubble and ignoring the rest of the country.

Because the rest of the country doesn’t share its obsession with destroying President Trump.

The Democrats were hollowed out by the left. The big tent was deflated. Pro-gun, pro-natsec and pro-life politicians were shoved toward the exits. But the hollowing out of the left also meant that the party came to orbit around the tastes, obsessions and attitudes of a tiny percentage of the country.

It’s why the Democrats can’t stop shouting about impeachment and Russian conspiracies.

Efforts by Rep. Nancy Pelosi and other top Dems to shift messaging always runs into a ditch because Rep. Maxine Waters, Rep. Ted Lieu and other #resistance pols know that support from the most engaged portion of the base will pour in for any politicians who talks impeachment. If you threaten impeachment, CNN will give you 5 minutes. If you want to talk about the economy, you get 5 seconds.

The politics of personal destruction can entertain and influence most Americans, but it doesn’t drive them. Trump’s insults succeeded as entertainment because they were tactical stratagems that didn’t define a political worldview. However the left doesn’t just toss around insults. It believes that its abuse is reflective of a higher truth about the relative humanity of Democrats and Republicans.

And that’s why their politics of personal destruction keeps flopping against President Trump.

The difference between humor and malice lies in how seriously it’s meant. Stewart, Colbert and Oliver tried to get under the fence by being self-deprecating. But it’s not the deprecation of the self that matters. It’s the deprecation of the worldview of the joke. Liberating humor treats the entire world as a joke. Totalitarian humor is a contemptuous lecture, a bray of consensus, disguised as a gag.

To most Americans, personal attacks are a joke. But the left is entirely serious about them.

The cult of the left truly believes in its own moral authority. It expects Americans to vote based on its personal attacks. But most Americans are independent. They’re driven by self-interest, not ideology.

Both Middle America and the Blues are voting their economic interests. Trump is delivering more manufacturing jobs. The Dems promise more employment for sociology majors. But the Blues insist on cloaking their economic opportunism in moral preening. The politics of personal destruction and virtue signaling allows them to avoid any discussion about their own financial interests in politics.

Instead political campaigns are reduced to a struggle between ‘good’ and ‘evil’. And the triumph of ‘good’ will, incidentally, unleash a torrent of grant money for bad art, green energy and ethnic studies.

Hillary Clinton ran on a negative message because it diverted attention from her corruption and lack of ideas. Her party is stupidly repeating the same trick in ’18 for the same sad reasons.

The Democrats are corrupt and have no new ideas. Their media megaphone allows them to shout at the rest of the country even as they have lost the ability to actually speak to ordinary Americans.

Doubling down on hating Trump has won a few special elections and created a constitutional crisis, but the midterm trend is moving toward Republicans because bigger tax refunds beat Saturday Night Live skits.

There’s a reason that ‘Follow the Money’ is the timeless truth of politics. Individuals may vote contrary to their apparent economic interests, but groups rarely do. (Not never, there are always aberrations.) When it comes to politics, the ‘wisdom of crowds’ has a distinct dollars and cents bottom line.

The left bet everything on culture trumping economics in the midterm elections.

It assumed that it could override the economic self-interest of millions of Americans with conspiracy theories, Stormy Daniels and a thousand personal attacks. It failed in ’16. And it’s about to fail in ’18.

The left bet everything on hating Trump. And that’s about to cost it a second election.

Realism vs. Idealism: The Impossibility of Peace in the Middle East

Hollywood's Blatant Hypocrisy: Only Fire People We Disagree With Politically