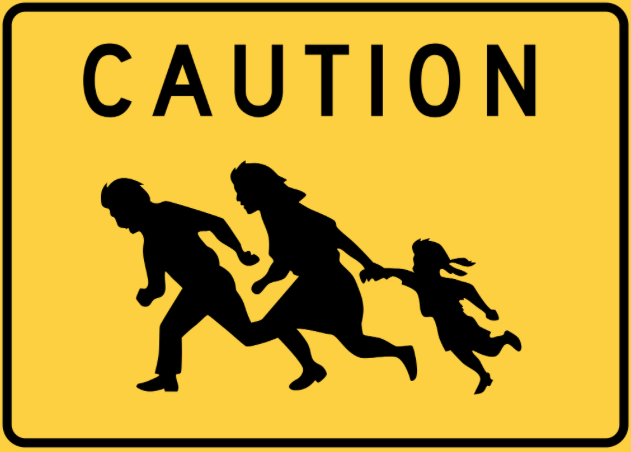 Controversy has erupted this past week over children being separated from their families at the US southern border. Images of children crying as their parents are being arrested are all over the media, Democrats have been outraged over this “trauma”, even calling it “child abuse”. Even some Republicans have been critical of the Trump Administration for this policy.

But is all of this outrage real, or even genuine? Or is it just another chapter in the anti-Trump saga?

President Trump is not instituting new laws, he’s only enforcing those already on the books. Policies that go back to the George W. Bush administration, and were even ramped up under Pres Obama. Congress, both Democrat and Republican, who seem to have plenty of time for press conferences and photo ops, can’t seen to pass any meaningful reforms on immigration. President Trump is using the law to not only secure our border but to put pressure on Congress to do their job.

No one wants to see families separated, but we need to not take these images at face value. The old saying “a picture speaks a thousand words” may be true, but does it speak truth?  Photos like these are used to play on the heart string of Americans, but rarely give the full story.

I have no doubt that it is difficult for both parents and children to be separated from each other. A parents love for their children and vice vera, along with a child’s sense of safety and security, is universal, no matter where you come from. This policy is not ideal, nor is it the best, but that doesn’t mean that it is not necessary.

We have to remember, that even though these are families coming in, they are breaking American immigration laws. When you break a law, you are by definition a “criminal” What happens here in America when a citizen, with a family, breaks the law? They are separated from their children. Their children don’t go to jail with them, even if they have no other family. Child protective services moves in and puts them into foster care or a temporary facility.

If liberals are so concerned about these families trying to cross the border, then why aren’t they working hard to make a deal to pass meaningful immigration reform? Why have they continued to block any efforts to reform the system or opt for photo ops? This is a question for many Republicans too.

The failure to pass immigration reform is only one example of the hypocrisy that surrounds this issue.

Anyone remember when Rep Nancy Pelosi attacked President Trump for calling the vicious and violent gang MS-13 “animals”? MS-13 rapes, tortures, murders and terrorizes their own people, both in their native countries but also here in the US. This gang is a major factor in why some of these immigrants from Central America and even Mexico, flee their home countries. Where was her concern for immigrants then?

Drugs are a major issue at our southern border, and it stems from the demand here in the United States. We are in the midst of a prescription drug/opiate crisis, one which ends up feeding not only the black market for prescription drugs, but the cheaper illegal opiates like heroin. What has Congress done about this? One good example is they passed a bill that tied the hands of the DEA – The Ensuring Patient Access and Effective Drug Enforcement Act. This bill was authored by two Republicans and was signed into law by Pres Obama.

A rare bipartisan effort? More like the power of the pharmaceutical companies over both parties. When exposed, Congress said they would re-write it. Months later, nothing has been done. Drugs, cartels, and the violence and crime that comes with it are key issues in why people are fleeing their countries. It’s also a major problem for the US itself. One which causes trauma every day to families of every race, socioeconomic level, immigrant and native alike.

A number of families here in the US have been affected by illegal immigrants who have come here and then commit crimes – many have lost loved ones because of this. This also encompasses MS-13 and their brutal acts taking place in a number of cities throughout the US, some just miles from Washington DC. Do these politicians care about the “trauma” of the families of American citizens who have lost loved ones in this way?

While we have very real problems taking place every day in our inner cities, most Americans, don’t know what real trauma is, what real fear is like day in and day out, like most of these immigrants have experienced. If you are coming to the border of another country to claim asylum, you have experienced things in your home country, that most Americans couldn’t even fathom. I find it disingenuous when I watch protesters in the streets, talking about the “trauma” being inflicted on these families, from their “liberal bubble” with their own type of “privilege”. In the scheme of things, temporary separation, is minor, if it results in a new life for your family in America, away from the hell in their own home countries. And that truly is what is going on in some of these countries – Hell.

In a May ABC Nightline story called “Mexico – March to Hell” It shows just a glimpse of the horrors going on, in this case, Mexico. People have been tortured, killed and left in the streets to send a message to anyone who would oppose the ruling cartel. A father and small business owner, shot 6 times in the face when he wouldn’t give money to the cartel. A coroner whose typical day is picking up bodies of murdered victims with a morgue overflowing with decomposing bodies. For those killed, there is no investigation and no justice. Most Americans can’t even fathom living in such a world.

We have seen time and time again, the political class, putting the needs and comfort of others over American citizens. The response to this phenomenon, was the election of Donald Trump as President. This bleeding heart mentality that falsely parades itself as a champion of the greater good, in reality, has done more damage than good. Just think of the various issues Pre Trump has already tackled, that come out of misplaced priorities. From unfair trade practices, failed foreign policies in North Korea and Iran, failed strategies in the Middle East, such as in the fight against ISIS, to immigration, esp our southern border.

We can not forget the very real threats coming from our border, that can harm not only Americans but the immigrants coming here for a better life. Children are trafficked regularly, even used to smuggle drugs, and if you want to look beyond immigrants coming from Latin America, our southern border has been an easy entry point for terrorists. The media may post photos of “innocent” children but we cannot forget, sadly, that not all children are “innocent”. There has been plenty of images showing ISIS and Al Qaida training children to be soldiers. Teaching them how to cut off the head of an enemy, how to use weapons, as well as their hatred for America and the west.

Beyond terrorism, some “children” are part of cartels and MS-13 and on the flip side, children are often trafficked into America, used to smuggle drugs, used as slaves or as part of the sex industry. Many times their “parents” are not their parents, they are strangers posing as such, using these children in order to gain entry into the US, or making money from families who have allowed these adults to take their kids on a dangerous journey to the border and into the US. Separating kids from their “parents” at the border works as a safety check for many immigrant children. Also, has anyone else asked, how safe is it for children to be housed with adults in a detention center, which holds much more than their family and other families, but potential MS-13 members, drug traffickers, violent criminals and more?

Pres Trump won the Presidency based on putting “America First” and that is exactly what he is doing. The time where our leaders put everyone else as priority over American citizens is over.  Coming to the US, no matter your story, is not automatic, and it’s a not a right. There are a lot of people in the world, children included, coming from terrible situations in their home country, but reality is, we cannot take in the entire world.

Let us not forget that if families do not want to be temporarily separated while they go through our immigration process, they don’t have to. No one is forcing them into this process. Don’t want to be separated? Then don’t cross our border, don’t break our laws, don’t file for asylum. But if you do want to come to the US, you respect and abide by our policies, our laws and our process, which are far from inhumane.

In all honesty, I wonder how many of these immigrants are really complaining without the help of organizations telling them what to do, basically jeopardizing the future of these families, for a political agenda. And that’s truly what is it. Whether it’s elected Democrats, some Republicans, immigration organizations, the media – it’s all about a political agenda. Don’t be fooled by the bleeding heart rhetoric. This is all about their anti-Trump agenda, not about the best interest of immigrants, and definitely not about the best interest of the American people.

The Dangers of Journalistic Malpractice: Do They Even Have a ‘Code of Ethics’ Anymore?