My Christian Faith is the most important thing in my life. If there were only one thing I could be assured of having, it would be that my children and their children accept Jesus Christ as their Lord and Savior and grow and mature in the Faith. Jesus is Love. There are many in today’s society that believe social engineering, secular humanism, and a supposedly universal and all-encompassing set of laws created by humankind can replace the most powerful force of all: God’s Infinite Love.

I am a firm believer in the concept that arrogance and disrespect always lead to disaster. Rather than embracing religion as a means of solving the world’s problems, many have fooled themselves into thinking it is the cause of the world’s problems. Religion has come to be viewed by many as an antiquated notion….something akin to fairy tales. That seems so foolish and misguided to me. Compared to the wisdom of God, the collective wisdom of all humanity is but a tiny fraction of a grain of sand on a beach. We know nothing.

I refuse to believe in random events. I have no problems with science and the scientific method. God gave us brains so that we might learn. I do have problems when science and other fields diverge from the scientific method in a misguided effort to prove or disprove the existence of a Divine Creator. Religion answers those questions human wisdom can’t: Where did we come from? How did we get here? What is and isn’t moral? Only a true fool would look at the Earth and chalk it up random events. I reject that the Earth, humanity and the civilization created by humans is the product of chance. That would mean that your computer, your cell phone, your car…very intricate machines, not to mention the human body itself came into existence through something akin to a tornado going through a junkyard and leaving a Rolls Royce behind.

Humans don’t know the answer to everything and it’s time this Country…perhaps the most blessed nation in all of human history stop trying to mess with the laws of God. It’s clear in the Bible that the rejection of God and the acceptance of that which is inconsistent with God always leads to disaster. My fear for not only the current generation but for those generations to come is that America will become the victim of its own misguided crusade to force religion out of everything. The leftist/MSM agenda is to create a godless society so that in theory, everyone will be forced to agree on everything…which is something that will actually end up happening because people of all Faiths will unite when it comes to overthrowing the resultant socialist disaster that is always the byproduct of such efforts.

Colorado baker Jack Phillips, a man of Faith, a man unwilling to compromise his Christian Faith represents what I fear future generations of Christians will face: persecution. What did this man do wrong? There is nothing in the tenants of Christianity that suggest one mistreat or harm another. Hatred towards others is completely at odds with the teachings of Jesus. At the same time, Jesus does not expect us to reject the Laws of God so that we might gain favor with the laws of man. Christians are called to love others, but that doesn’t mean we have to accept that which is contrary to our beliefs.

What crime did Jack Phillips commit? He refused to bake a wedding cake for a gay couple. I haven’t read anywhere where he treated those who requested the cake in a rude or hateful manner. He simply said making such a cake went against his Christian beliefs. He didn’t tell the gay men he wouldn’t sell them anything or make any cake that didn’t go against his Faith. He stood on his beliefs. 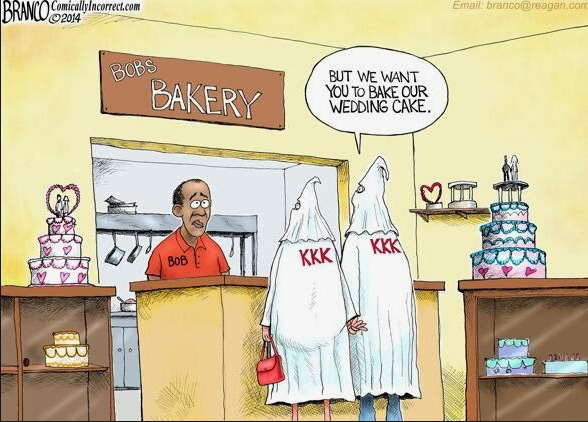 Ninety-nine percent of the time I’m totally in favor of laws that say you cannot discriminate against people due to their race, gender, religion, age, and even sexual orientation. If you run a restaurant, you shouldn’t refuse service to people based on their attributes. If you run a store that sells merchandise, the same principles hold true. We have laws in place so that past injustices such as Jim Crow laws and segregation don’t occur again. Absolutely. Treat everyone equally. Unfortunately, things aren’t always that simple (such as who uses which bathroom).What about businesses that don’t provide standard goods or services? Businesses have target markets…customers that would have need of customized products and services.

I’m not equating homosexuals or gay marriage to things that represent hatred and violence, but for arguments sake, consider the following: Would it be right to force a Jewish baker to make a cake with a swastika? Would it be right to force an African-American baker to make a cake for a white supremacist rally? No sane person would argue that the bakers in those two hypothetical scenarios should be forced to make such cakes. It would naturally go against every belief of the bakers in question. So what is the difference in Jack Phillips’ case? Aren’t his beliefs valid as well? Who is qualified to say which beliefs deserve protection and which don’t?

Hopefully it won’t be the Colorado Civil Rights Commission, which displayed outright hatred of Christianity and religion in general going as far as to say that “freedom of religion, and religion, has been used to justify all kinds of discrimination throughout history, whether it be slavery, whether it be the Holocaust.” Wasn’t this country founded by people who wanted freedom of religion? Who is this Commission to condemn such freedom? Has the United States devolved to such an extent that it now opposes that which it was founded upon?

With its 7-2 decision in favor of Phillips, the Supreme Court, has at least for the time being, put limits on religious intolerance. Its official opinion also provided a remedy for handling future cases of this nature: “The outcome of cases like this in other circumstances must await further elaboration in the courts, all in the context of recognizing that these disputes must be resolved with tolerance, without undue disrespect to sincere religious beliefs, and without subjecting gay persons to indignities when they seek goods and services in an open market.”

The solution was/is simple: Rather than carry out a vendetta against Phillips for his stance, the gay couple should have found another baker. In an open market, if there is a demand, someone will fill it. So, if I want a cake made in the shape of gun for an NRA rally and the first baker I go to refuses to make such a cake based on their beliefs/experiences, rather than attempt to force that baker to adhere to my beliefs by initiating legal action, it would be far easier to find a different baker. Live and let live. Tolerance is a two way street and tolerance can’t be imposed.

Today’s Supreme Court decision is a victory for free speech and common sense. It will hopefully serve as the guide for the inevitable and eventual showdown: If my minister refuses to marry a gay couple because it is contrary to Christian beliefs, will he be jailed or prohibited from preaching? Will the government attempt to destroy my Church in the name of tolerance?