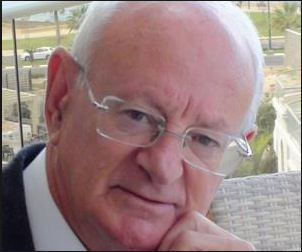 It’s surprising, some would say shocking, where you find little incidents of anti-Semitism. They sort of sneak up on you in sublime places, leaving you in a quandary whether to address it or walk away from it.

This happened to me on the final sea day on the home leg of our fjord cruise aboard the Norwegian Jade heading southward to Southampton ahead of our flight back to Israel.

I went for a late self-service lunch in the Garden Café, my wife, one of our daughter’s, and me. The place was still fairly crowded at 1.15 and we joined a table occupied by a tiny disheveled elderly man. He wore a mismatched pair of trousers and jacket that had seen better days, that covered an ancient shirt from which a scrawny neck poked out of an oversized stained collar. He must have been one of the only passengers on the ship who wore a tie at lunchtime.

He peered at us through his George Burns spectacles as he told us he was eighty-nine and travelling alone in an inside, windowless cabin. We congratulated him on his independence and health to enjoy travel.

He had emerged from his cabin at around nine o’clock that morning and gone to the Garden Café at around nine thirty. It took him so long to eat his breakfast that the waiters had changed the menu for lunch. So he decided to stay where he was for his mid-day meal. This was apparent by the multiple stains on the white napkin he had thrust down the collar of his old shirt. His lips were stained by something brown he had eaten, and odds bits of food were ejected from his thin lips as he told us he ate lots of porridge. My wife nodded, eying me, when he told us his role in life was avoiding pneumonia. “It can kill you, you know.”

After the usual pleasantries, I hazarded a guess that he came from New York. I was wrong. He surprised me by telling us he was from some place in Texas. I congratulated him on the extraordinary long distance flights he had taken on his own from Texas to London and then the road travel down to Southampton to meet the cruise ship.

Then I said we lived in Israel. He stared at me.

“Why do your neighbors hate you?”

“All you people want is our money.”

Momentarily off-balance, I asked him what he was talking about. He answered, “You Jews keep coming to our Congress begging for our money.”

Trying to maintain a jovial atmosphere I attempted a weak but pointed joke.

“I thought you people accuse us of controlling the banks and world global economy. Now you accuse us of begging for your money.”

The old man came back. “Yes, that’s all you want from us, Our money.”

My wife glared at me to keep quiet. That’s what Jews usually do when confronted by a Jew-hating dinner guest. But I wasn’t prepared to take it without some sort of response. I don’t let these low level, deep-seated, anti-Semites go unanswered. You can’t win them over but the new Jew should not sneak away. It didn’t require much added provocation, but it came.

“Why are you people so stubborn?” he asked. It was more a statement than a question.

“I’ll tell you why, old man,” I ventured. “It’s because for two thousand years we had to put up with snide little Jew-haters just like you, and much, much worse. You ask why we are stubborn. It’s because we don’t take crap from people like you anymore.”

There is no way you can convert a person from a decades old antisemitism, someone in the late stages of his octogenarian period. It’s far too late in his life for that. He will go to his grave with that biased chip scarring his soul. But there is an advantage to being on the way to seventy-six and no longer duty bound to respect your elders any more, particularly those with a life-long, built-in, ignorant hatred of Jews.

I remember many such people from my days in England. People living in places who rarely met a Jew yet who still had this false negative myth of us.

This is not contemporary antisemitism. It is the same old nasty, petty, ignorant Jew hating that many of us experienced when venturing out of our comfortable communal shtetls into areas in the north of England, or somewhere in Texas. Places that were miles away from Jews, many years ago.

Apparently, it is still alive and hating in silence today. Just scratch the surface, and there it is.

Barry Shaw is the author of ‘Fighting Hamas, BDS, and Anti-Semitism.’ He lives in Israel and is also the Senior Associate for Public Diplomacy at the Israel Institute for Strategic Studies.

Is Trump or the Left Separating Families?