If you were to see a wealthy self-made businessperson who worked tirelessly to see their business succeed suddenly destroying their houses, cars, planes, and other personal assets for no good reason, what would you conclude? Assuming no laws are violated, it’s up to them if they want to destroy their own property. We live in a free country. Some might even call it ‘freedom of expression’ but most people would call it stupid. Why would someone deliberately destroy something they worked so hard to attain? It’s theirs, but why waste it?

I believe in my Country. It has endured for nearly 250 years. It started out with an outnumbered and outgunned army of American colonists who defeated the mighty British Empire. Amongst those colonists were some of the most brilliant minds in world history. They possessed the wisdom to write a Constitution which represents humanity’s best effort to define freedom and God-given rights. Their descendants along with those who immigrated here developed what has become the most powerful economic and military power in world history. Our nation was strong enough to survive a war between its own states. It was strong enough to decide the outcome of European affairs (namely two World Wars) and stop the spread of communism. Does that sound like something that needs to be needlessly destroyed? We may not always agree with its direction, but nothing is accomplished by destroying it.

I still have faith that our country will continue to endure, but it now faces a new kind of threat: the collective insanity of its own citizens. It’s like we are an army full of people who would rather kill each other than any foreign threat. We have inherited a wealthy and powerful nation but there are those amongst us who are perfectly fine with squandering it away in the name of globalism and socialist ideals. They would have us believe we should feel guilty for what we have today. Why? No one ever achieves anything great without it coming at someone else’s expense. That’s life. It’s only a matter of degree. No business can succeed without negatively impacting other businesses. If one is accepted into an elite school, it means someone else didn’t get that spot. If a football team wins the Super Bowl it comes at the expense of 31 other teams. Healthy competition is what inspires us to be better and to achieve great things.

America has its flaws. racism and prejudices exist but it is far more pervasive than the actions of a limited few. We don’t live in a perfectly fair and equal society, many injustices take place, but only a few ever draw any attention. Denouncing the principles which have carried us so far in the name of achieving universal equality and justice for all, is madness. Such goals are admirable, but not pragmatic. They can’t be achieved in the short-term. MSM would have us believe these goals are within reach…if not for President Trump and his supporters.

Patriotism is a relatively simple concept. Merriam-Webster defines a patriot as: ‘one who loves his or her country and supports its authority and interests.’ This sentiment makes sense: ‘I’m glad her coffin is covered by the American flag. She died in the line of duty as a member of our armed forces defending our freedom.’ This sentiment makes no sense: ‘Having achieved fame and fortune as a football player, he became disillusioned with his country. As such, he showed his patriotism by refusing to honor the American flag.’

Just because you can do something doesn’t mean you should do it. A real patriot respects the authority of their nation. That authority is represented by the Constitution and those who have been elected to defend that authority, namely the President. A real patriot cares first and foremost about the best interests of this country, regardless of its impact on the rest of the world. Countries around the world are represented first and foremost by one thing: their flag. The American flag is the banner under which all Americans live. It is what gives us a common identity as a people. When Armstrong landed on the moon, he planted an American flag. The U.S. Marines on Iwo Jima raised an American flag. If you are an American, Old Glory should mean something to you. Disrespecting it is NOT patriotic.

I seriously doubt many veterans of our armed services, especially combat veterans, are comforted by the massive divisions within this country. If you aren’t fighting for a common set of values and beliefs, then why fight in the first place? Has any military unit in the history of the U.S. Armed Forces ever celebrated a victory by burning our flag? Soldiers fight for many things, but during combat, I can’t imagine them hating their own flag. At one time the role of flag bearer was a key role in combat. Though unarmed, that person carried a symbol that let soldiers know where their comrades were located. It isn’t a meaningless emblem. 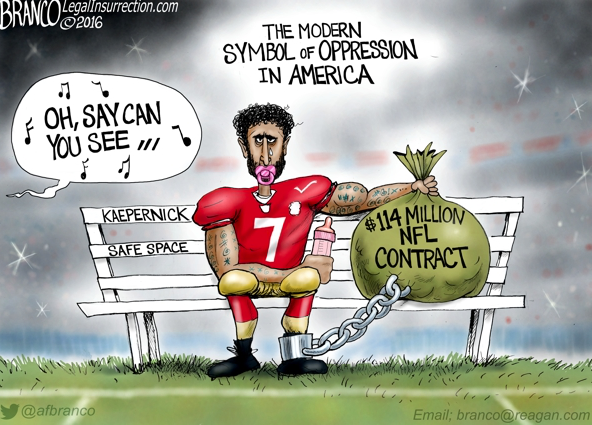 MSM is quick to defend NFL players who refuse to stand for the Anthem. The disrespect is justified as resistance to an imaginary tyrant. President Trump is not a tyrant. If he were a tyrant he would have citizens arrested and executed for not saluting the flag. If Trump is trying to be a despot he sure is doing a terrible job. The press in this country is allowed to operate unchecked. If nothing else Trump proves that free speech is in fact alive and well in this country. I haven’t seen Trump shit down MSM. To Trump and to many Americans, we are indeed entitled to freedom of speech, but it goes both ways. Why is it assumed he has no right to state his case and answer his critics and express his feelings?

We are constantly presented with false dilemmas. MSM puts forth the notions such as: ‘If you support President Trump, then you are clearly a racist and misogynist.’ It isn’t an either/or scenario. One may support the President for numerous valid and patriotic reasons. Statements such as: ‘The American flag represents many freedoms including the freedom of speech, so disrespecting the flag is actually a way of honoring it because you are exercising free speech’ fall more into the area of circular reasoning (i.e. a logical fallacy). A comment such as ‘That person refused to stand for the national anthem. Therefore, they must be upset with their country. If so, they are free to leave’ makes far more sense to me.

Here is a challenge in deductive reasoning for all the misguided, self-righteous and vulgar haters of President Trump: Only the voters are qualified to determine who is/isn’t fit for office. A duly elected President represents the will of the people in a country that prides itself on freedom. Respecting the Office is not the same as supporting the person occupying it. The office is bigger than any one person. Opposing the occupier isn’t un-American, denouncing the Office itself is un-American. Denouncing the entire country because you hate the person serving as President is foolish. If you are upset, express your opposition by running for office or campaigning for someone with whom you agree…during the next general election. That is truly American.

Daniel Greenfield: A Conspiracy Theory About a Conspiracy

Prager University, Adam Carolla: Nobody Really Cares How You Feel