A recent opinion piece on the Education Week website, written by a doctor-turned-teacher raised some very valid points regarding the compensation and lack of respect shown to the teacher profession. These two factors are often blamed for the low pay and poor working conditions faced by many teachers across the country. After reading the article, I came away with very mixed feelings on the issues raised.

While I can agree that many teachers are completely dedicated to their work, I believe some of the “negative” view of teachers has been derived from two problems. 1)The inordinate level of protection provided to them through unionism that prevents a school district from removing poorly performing teachers; and 2) the level of ideological bias exhibited by an overwhelming number of teachers that transfers to students in the form of distortions of facts and events in history.

From my perspective, as one who has had a lengthy career in several disciplines (including training but not classroom teaching), there is first and foremost no place for unions in the public sector. Management negotiating with a union using taxpayer funds is tantamount to negotiating against oneself. It is made much easier when you know that the ability to increase taxes, if necessary, is always available should the negotiations hit a wall. 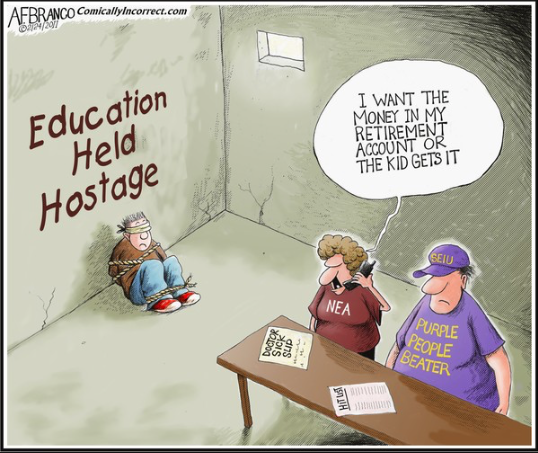 Most onerous among the issues negotiated in union agreements are those related to discipline and hire/fire decision-making. Neither of these should ever have become part of any bargaining agreement as they are subjective decisions that cannot be reduced to written criteria easily. As a result, union contracts typically avoid performance-based criteria and nearly always require retention decisions be based on seniority. Tenure is another evil of bargaining agreements that should never have existed. The teaching profession is the only job in the world where you can reach protected status in as little as four years after initially being hired. This is typically less time on the job than is required for full vesting in a retirement savings plan at most jobs.

The second issue of concern gets to the root of what a teacher’s position should be about. A teacher should teach children how to think, not what to think about a given subject. They should provide objective facts and methodology that allows the student to reach a conclusion as to who did what, when, and where (history), what happens when…(science), how letters create a word, sentences, paragraphs, and stories and why grammar, punctuation, and syntax matter for effective communications (ELA), and how to manipulate numbers and the benefit of knowing how numbers affect and influence one’s life experiences (math). They should also provide objective examination of our government structure, purpose, and why individual freedom deserves to be as complete as possible within the confines of the minimal restraints needed to maintain public order. In other words, they should be teaching what America was intended to be and how it has improved the lives of millions around the world through its unique ability to generate widespread prosperity. They should be teaching the value of “equal opportunity” as opposed to “equal results.”

The tendency for ideologies hostile toward our form of government has been increasing for at least 40-50 years, although the effort to insert ideology into teaching began as early as the 1920s or before. This disturbing trend can largely be attributed to the overwhelmingly leftist ideology which teacher training programs subject their students to before they ever reach their first classroom. It has been estimated that the faculties of American universities are overwhelmingly dominated (as high as 95%) by those who support a progressive/socialist view of government in America – something that is the antithesis of what our constitutional republic represents. Because of this strong influence, teachers are not taught how to transfer knowledge as much as how to “mold young minds” to believe a certain way and believe certain “facts” that do not comport with an objective presentation of reality.

The ideological influence is a problem that may take generations to reverse. On the other hand, there are only two ways to reduce the influence of unions to improve the quality of teachers. The first is to limit contract negotiations to pay and benefits while leaving disciplinary issues and hire/fire decision to the district management. This was accomplished in one state when the governor took decisive action through the legislature to break the strangle-hold that unions had on the school districts. The second should be the elimination of public sector unions altogether and give teachers incentives based on performance.

Those changes are not easy to implement but are nonetheless necessary. It would also help to provide meaningful input into evaluation of classroom performance by parents that are typically now limited to tokenism through “committees” comprised of teachers, administrators and parents but where parents do not have voting privileges and are largely ignored.

On the flip side of that, student performance can also be linked directly to the level of involvement of parents in what their children are doing in school and just how much encouragement parents give their children to succeed. That, too, has been sorely lacking in recent years. Clearly, this is a key component of student success, too. It is not solely the teacher that determines that success.

The bottom line seems to be that the author of the commentary on Education Week is certainly on the right track, but I firmly believe that the cart has been placed ahead of the horse. Things need to be changed within the ranks of teachers, and things need to change within the family homes of America.

Results are what generate respect for teachers and parents, alike. Results are also the generators of higher compensation that comes from success. Lately, across America, results have been sorely lacking in many respects. This must change among all the stakeholders before attitudes toward teachers (and teachers’ attitudes toward parents) improve.

Prager University: Is Happiness All About You? Not Really…