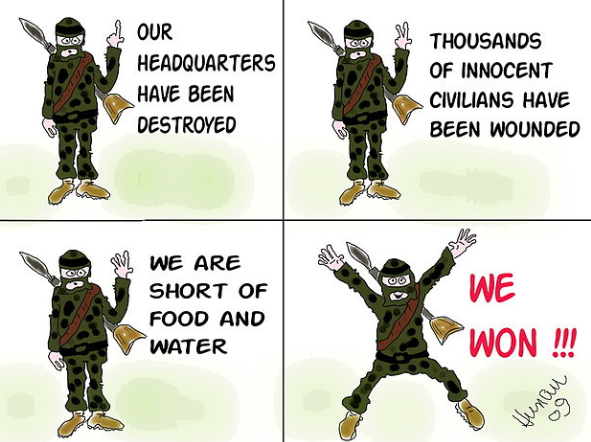 Did you notice, during the recent mass riots on Israel’s border with Gaza how the Western media played their knee-jerk role of turning the violence into an emotional defense of Palestinians and an attack on Israel? Why do the media always fall into the terrorist trap?

They always talk of Palestinian dead and not Hamas or Islamic Jihad dead. The latter would be more truthful, but it wouldn’t make such tear-jerking headlines, would it? If truth be told, telling the truth would put Israel on the moral high ground but that would be against editorial intention. Tales of dead babies win every time against a tale of Jews defending their country against a fomented mob of 40,000.

The real faces of those killed during the Hamas-motivated suicide riots are three of the Palestinian Islamic Jihad terrorists killed by Israeli IDF snipers during the so-called “protests” on May 14. Of course, they didn’t wear their uniforms as they herded excited Gazans to the border fence to burn tires creating intoxicating and choking black smokescreens to blind Israeli soldiers as they feverishly snipped at the border fence or placed explosive devises there.

The vast majority of those killed were paid up members of the Hamas terror group. This was admitted by both senior Hamas official, Salah Bardawil, and by Yahiya Sinwar, the head of Hamas in the Gaza Strip. Bardawil admitted at 50 of the dead were Hamas fighters. Mahmoud Rantisi, a Hamas terrorist who had been caught and imprisoned by Israel but released in a prisoner exchange for captured Israeli soldier, Gilad Shalit, while grieving over the death of his son, admitted that his son was a “jihad fighter” and “an operator in the nukhba,” the Hamas elite force. Like father, like son. Killers, or potential killers, of Jews.

Of course, you wouldn’t know these things if you read the Western media or viewed their frenetic reporters dressed in flak-jackets and wearing helmets in front of a background of dramatic bellowing smoke. They never talk of “jihad,” or “armed struggle,” or that “The Zionist enemy is our adversary, and there is no room on our land for it. This is jihad – victory or causing death in the way of Allah!”

These were official Hamas quotes to the people as they bused them to the border and led them onto the battlefield with the declared intention of breaking through the flimsy fence to kill soldiers and settlers and, using concealed knives and guns, to kidnap Jewish villagers and drag them back into Gaza.

Instead, the media fell into the trap of describing unarmed Palestinians being killed and injured with “disproportionate force” by Israelis.

As international law professor, Alan Dershowitz, who went to visit the border, asked, “Why does the media keep encouraging Hamas violence?” by their misreporting of the facts.

The reason is the lazy journalists can’t be bothered to do their investigative reporting. Had they done so they would know that the IDF does not open fire indiscriminately. Rather, the snipers are under the command of an officer and each shot required approval. What is not known by the lazy journalists is the technology in battle conditions that enables the soldier to identify and pinpoint the terrorist individuals hiding among supportive civilians and leading them in their quest to get to the border fence. The IDF soldiers may not know the identity of the terrorists while events are unfolding but, with the use of technology, they can see how the battlefield is unfolding and who are the major operatives leading the charge.

In numerous cases, the IDF units can see with technological aids who is carrying weapons, explosives, or items designed to breach the fence. Without divulging too much about the sophisticated use of battle technology employed by the IDF, it is possible to kill or to maim with accuracy to prevent life-threatening situations against soldiers or the Israeli civilian population they are defending and who are living very close to the border. That is why, days later after the frenzied shallow journalists have printed and aired their emotion-charged reports, the actual facts slowly emerge that the vast majority of those killed are identified as known terrorists. By then the anti-Israel damage has been done and Hamas declares a huge propaganda victory.

The gap between editorial output and facts was exhibited by the British Daily Express which portrayed Israel as baby-killers with the lurid headline, “Mother’s agony as baby dies in Gaza gas horror.”

The problem with this troublesome and gruesome headline lie was that it conflicted with the Gazan doctor who told AP that the baby in question had a pre-existing heart condition and that he didn’t believe its death was caused by tear gas.

Equally repulsive was the nonsense put out by The Independent newspaper. Referring to the baby’s death, it wrote, “In this context it is worth reminding ourselves of the worldwide wave of revulsion against chemical weapons we have seen in recent weeks.”

What has this to do with non-lethal tear gas? This was falsely explained in the article. “Palestinian victims deserve the same sympathy and protests as anyone else when their children suffer from gassing.”

Get the picture? The grotesque Independent equates Israel’s use of non-lethal tear gas to break up a mass riot of 40,000 Palestinians to the deliberate barrel-bombing of Syrian civilians by Assad with deadly chemical weapons. Assad, who has so far killed 600,000 of his own people and thousands of Palestinians.

It took the Arab media to force Hamas into an admission that, overwhelmingly, the majority of the dead that resulted from their suicide riots were Hamas. An Arab TV interviewer demanded to know why Hamas had allowed “people’s children to go to their deaths while Hamas reaps the fruit.” To protect the reputation of Hamas Bardawil claimed. “It cannot be said that Hamas was ‘reaping the fruits.’ It paid the highest price. Fifty were from Hamas. The figures are official.”

As such, papers such as this and the Daily Express have become propaganda sheets of the Hamas terror organization and Palestinian Islamic Jihad, while some in the Arab media know exactly what is going on.

Shame on the Western media. They have totally lost the plot with their fake news. And they consistently fall into the Hamas trap with their shallow journalism.

Barry Shaw is the author of ‘Fighting Hamas, BDS, and Anti-Semitism.’ He is also the Senior Associate for Public Diplomacy at the Israel Institute for Strategic Studies.