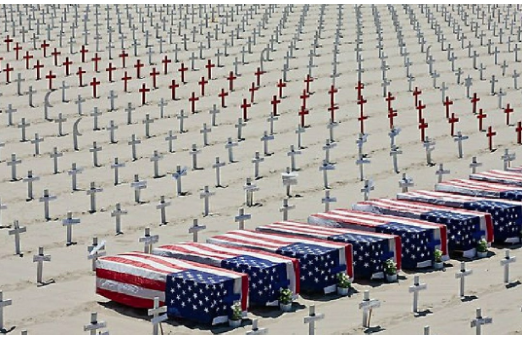 This past Memorial Day weekend was not the norm for me. There were many things to do, and recognize and give honor to, as this is still the best made country in the world, and it is so, by God’s Grace. Many know that politics use to stay out of patriotism and in the past few decades that seems to be eroding as well. However, my daughter who is politically on the opposite ends of what I stand firm on, made me proud as I have ever been, yet again. She was so excited to be volunteering at the WWII Memorial in Kansas City, MO, this Memorial Day. Throughout the day, she sent us pictures of her day there, so much so, that there was no doubt in my mind of her wonderful love for our great nation and those who sacrificed in the success of its vision. She knew her Grandpa John fought in WWII, and received 2 purple hearts on 2 separate occasions; only to go on and fight in the Korean War and Vietnam.

It also made me realize, that she too remembers the hardships she her sister and mother went through as I was deployed fighting in the Gulf War and other real world theaters of operations.

On Saturday I was working on my military themed teardrop camper in my driveway, as I was reflecting on my very strong Irish father, John E. Cummings, who is buried in the Arlington Cemetery in Washington D.C., I heard a faint sound coming from somewhere, that sounded like bagpipes. The Irish pipes were calling and I had to find their origin. My dog, Soldier, jumped in my truck with me and we followed the sound till we found ourselves at Central Park, where there was no one, except a single man standing in the park’s gazebo practicing his bag pipes.  The sound brought back so many feelings of my father, soldiers, fallen police officers, and firefighters across this country. I asked him his name and he told me it was Richard Ensley, who grew up here in my hometown, but since moved away and was back for the alumni reunions. I asked him if I could record him on Facebook live and he agreed to play a few songs for me, ending with Amazing Grace. Wow! That really made my weekend for sure. In the first couple of hours there were six thousand viewers. I was glad to broadcast such a great moment in time.

I am currently working with a great organization called Patriot Mission, which is focusing on the Vietnam War’s 50th Anniversary Project. It is a really must see and participate in project, one that is well overdue in our great Nation. It’s CEO, Steve Olds, a very good friend of mine, and an F-15 fighter pilot and Gulf War Veteran, just sent me an updated 2:32 minute video that you can watch at www.PatriotMission.com; just click where it says “Watch Video.”  Truly a great project and as I aforementioned, Americans are way overdue in participating in a project that will give the Vietnam Era Veterans and this great country of ours, our thank you and continue to add to keeping our America even greater in a time of confusion and forgotten vision of our freedoms and liberties.

I will forever be grateful to those who fought for this nation, from the “winter of the red snow” to the “sandbox,” and remember those whom I have lost in combat, and are known as your everyday, small town U.S.A citizen, just doing his part to keep our country strong and free. https://www.youtube.com/watch?v=8oBEaiDLklY Steve also sent me this poem on Monday, it was written in 1987 by Lawrence Vancourt; enjoy.  Just a Common Soldier

“ He was getting old and paunchy and his hair was falling fast,

And he sat around the Legion, telling stories of the past.

In his exploits with his buddies; they were heroes, every one.

And tho’ sometimes, to his neighbors, his tales became a joke,

All his Legion buddies listened, for they knew whereof he spoke.

But we’ll hear his tales no longer for old Bill has passed away,

And the world’s a little poorer, for a soldier died today.

He will not be mourned by many, just his children and his wife,

For he lived an ordinary and quite uneventful life.

Held a job and raised a family, quietly going to his own way,

And the world won’t note his passing, though a soldier died today.

When politicians leave this earth, their bodies lie in state,

While thousands note their passing and proclaim that they were great.

Papers tell their whole life stories, from the time they were young,

But the passing of a soldier goes unnoticed and unsung.

Is the greatest contribution to the welfare of our land,

A guy who breaks his promises and cons his fellow man?

Or the ordinary fellow who, in times of war and strife,

Goes off to serve his Country and offers up his life?

A politician’s stipend and the style in which he lives,

Are sometimes disproportionate to the service that he gives.

While the ordinary soldier, who offered up his all,

Is paid off with a medal and perhaps, a pension small.

It’s so easy to forget them for it was so long ago,

That the old Bills of our Country went to battle, but we know

It was not the politicians, with their compromise and ploys,

Who won for us the freedom that our Country now enjoys.

Should you find yourself in danger, with your enemies at hand,

Would want a politician with his ever-shifting stand?

Or would you prefer a soldier, who has sworn to defend

His home, his kin and Country and would fight until the end?

He was just a common soldier and his ranks are growing thin,

But his presence should remind us we may need his like again.

For when countries are in conflict, then we find the soldier’s part

Is to clean up all the troubles that the politicians start.

If we cannot do him honor while he’s here to her the praise,

Then at least let’s give him homage at the ending of his days.

Perhaps just a simple headline in a paper that would say,

Our Country is in mourning, for a soldier died today.”

Until next time, “Charlie Mike” (Continue the Mission)

Twitter and Media Official Decree: "Our Rules Are for Thee But Not for Me!"