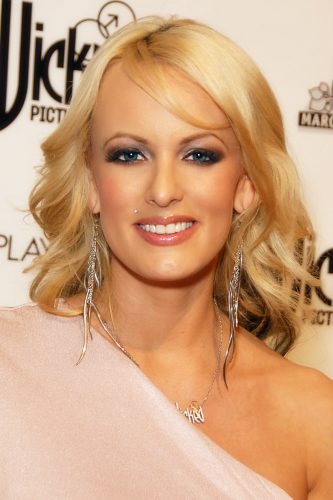 All is not well in Stormy Daniel’s world. And it has nothing to do with Donald Trump, who, btw she categorically denied having an affair with back in January. The media has totally ignored this:

“The fact of the matter is that each party to this alleged affair denied its existence in 2006, 2011, 2016, 2017 and now again in 2018. I am not denying this affair because I was paid ‘hush money’ as has been reported in overseas owned tabloids. I am denying it because it never happened.”

No, Stormy Daniels is having some stormy weather because of a sexual assault accusation during the filming/production of an adult film she was involved in.

Tasha Reign, another adult film actress is alleging that she was assaulted on the set while getting ready to, shall we say, “perform”. The Daily Beast (not a right wing site, btw) describes her this way: Reign was the lead in the film, starring alongside the adult actor Michael Vegas. She even had some meaty dialogue.

Well, thank goodness for that! We wouldn’t want her to be stereo-typed as an actress would we?

Here are her own words about the assault:

“I was sexually assaulted by one of her (Stormy Daniel’s) crewmembers. He groped and grabbed me from behind,” she says, wiping away tears. “I spoke up immediately because I was in the moment, and I was so proud of myself. She was the director that day, I went straight to her and straight to the man that did it, we had a conversation about it, I went to the owner of Wicked Pictures, I did all the right things. And she did not handle the situation appropriately, respectfully, or professionally. So it’s a little bit outrageous when I hear her say things about how she is standing up for women and wants to be a voice for other women to be able to come forward when I was assaulted on her set and she didn’t give me any care or attention, and didn’t even send that man home.”

Whoa, wait. Storm Daniels is a DIRECTOR?? I’m not even going to ask WHAT she directs. You can’t make this stuff up!!! And I don’t think the words “appropriately, respectfully, or professionally” readily come to mind when one thinks about that industry. Besides, Stormy Daniels has said both that she did and didn’t have an affair with Trump. Why would anyone trust her?

“I’m fully clothed in my outfit, I’m standing and signing my paperwork, and all of a sudden I feel two hands from behind me grab my ass and make sexual moaning noises. I felt a pit in my stomach and thought, my scene partner, Michael Vegas, is in the other room… who is this?”

“So I turn around and it’s a crewmember from set. I look him directly in the eye and go, ‘What are you doing?’

So after all this, the “legendary” director Stormy Daniels takes Tasha aside to try and calm the situation down:

“Stormy says, ‘I’m sorry,’ gives me a hug, and then she shames me by saying [of her alleged abuser], ‘You probably made him cry. He’s crying right now. And I thought, wow, I’ve lost all respect for you, and I’m also immediately calling your producer and your company and telling them exactly what occurred.”

That would be Wicked Pictures. Are we in the Twilight Zone? Any minute now I expect Ashley Judd to enter this story and start screaming about nasty women.

The owner of Wicked said in an email that it’s ‘resolved’ because [the crewmember] will never work there again since Stormy doesn’t work there anymore, and he was only working there because of Stormy. I was like, that’s not ‘resolved,’ that’s ‘convenient.’

After all this, Michael Avenatti, Stormy’s lawyer, issued the following statement to The Daily Beast on behalf of his client: “Ms. Daniels’ recollection of what happened is vastly different. Further, after the incident in question, Wicked performed a thorough investigation and found no substantiation for the allegations. It simply did not occur as Ms. Reign suggests.”

Question: If it didn’t happen then how is the recollection simply “vastly different”? Or that it did not occur as she suggests?

It appears the Michael Avenatti is not telling the whole truth either (imagine that!). Here is the latest statement from the vaulted Wicked Pictures company:

“We have been and are appropriately investigating.”

Sounds like it’s not over yet! Or did I confuse that quote with one from Robert Mueller?

What will the coming weeks and months bring to this saga? Stay tuned! (Well, not LITERALLY of course!).

Identity Politics: How Did it Come to This?