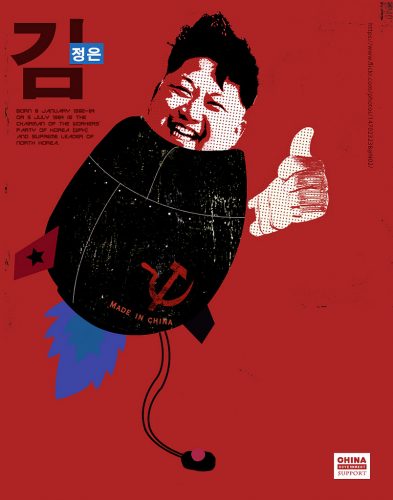 President Trump has called off the June 12 summit with the Rocket Man of North Korea (the dictator formerly known as Kim Jong Un). Which begs the question – how will the world survive??? Surely the doomsday clock MUST be less than a minute to midnight now!

Here is Trump’s letter to Kim:

Chairman of the State Affairs Commission

of the Democratic People’s Republic of Korea

We greatly appreciate your time, patience, and effort with respect to our recent negotiations and discussions relative to a summit long sought by both parties, which was scheduled to take place on June 12 in Singapore. We were informed that the meeting was requested by North Korea, but that to us is totally irrelevant. I was very much looking forward to being there with you. Sadly, based on the tremendous anger and open hostility displayed in your most recent statement, I feel it is inappropriate, at this time, to have this long-planned meeting. Therefore, please let this letter serve to represent that the Singapore summit, for the good of both parties, but to the detriment of the world, will not take place. You talk about nuclear capabilities, but ours are so massive and powerful that I pray to God they will never have to be used.

I felt a wonderful dialogue was building up between you and me, and ultimately, it is only that dialogue that matters. Some day, I look very much forward to meeting you. In the meantime, I want to thank you for the release of the hostages who are now home with their families. That was a beautiful gesture and was very much appreciated.

If you change your mind having to do with this most important summit, please do not hesitate to call me or write. The world, and North Korea in particular, has lost a great opportunity for lasting peace and great prosperity and wealth. This missed opportunity is a truly sad moment in history.

President of the United States of America

I just love the fact that Trump pointed out that our nuclear capabilities are far superior to his. It was a veiled threat but one that will no doubt make a point.

So what happened? Things had been going so well between them that the left had abandoned the “Trump is a bully to North Korea” template for the new “Trump is being too nice to a brutal dictator”. That was still the case today as Pelosi of Borg pontificated for her rabid, radical base:

“I think it’s a good thing for Kim Jong Un. Here you had a thug, a person who killed his own family members, a person who runs a police state, being legitimized by the president of the United States. They were on par with each other. He got global recognition and regard. He’s the big winner. When he got this letter from the president saying ‘OK, never mind’—he must be having a giggle fit right there in North Korea. This takes preparation. This takes knowledge. This takes judgment. And clearly it takes preparation, which the president didn’t make. It’s clear he didn’t know what he was getting into, and now he’s walking away from it in this very chummy, palsy-walsy letter to Kim Jong Un. He, Kim Jong Un, is the big winner. It’s unfortunate because as you say you want to be optimistic.”

Global recognition? Right. No one had EVER heard of King Jong Un until Trump’s letter today. So once again the left sides with a foreign leader in opposition to a U.S. President. Notice there is no mention of the freed hostages (why that might put Trump in a positive light!).

Two items (among others) appear to have caused the cancellation. First, the insulting comments about Vice President Mike Pence by Choe Son Hui, a vice-minister in the North Korean Foreign Ministry: “As a person involved in the US affairs, I cannot suppress my surprise at such ignorant and stupid remarks gushing out from the mouth of the US vice president.

If I didn’t know who said that already I would have predicted it came from Joy Behar.

Second, there is speculation that the destruction of the nuclear site may have just been for “show”. Unfortunately we’ll never know because Hans Blix wasn’t available to fly to North Korea, be denied access to the nuclear facilities and then declare the country free of nuclear weapons (followed by a stern letter to Kim from the UN). It’s a shame because it would have been an amusing Bugs Bunny/Elmer Fudd parody (“be very very quite…I’m looking for nuclear weapons!”).

And finally, Rocket Man himself is understandably upset. I am sure when he released the hostages he expected a plane full of money to be landing shortly. That’s how things were handled during the previous administration. When that didn’t happen he returned to the provocative dictator we all know and expect.

My prediction is that Kim comes back to the table. He has played his hand and has nothing left. Trump is engaging in “The Art of the Deal” international style and this in itself is a negotiation tactic (like walking away from a car dealer when the price is too high). And despite the nattering nabobs on the left, Trump will come out on top as he always seems to do. You would think folks would have figured out his strategy by now, but since they think he is a stupid imbecile they never will. They made the same mistake with Reagan and Bush.

And China will probably be giving Kim a call with some “gentle persuasion” that it is in his best interest to do so. And when the summit does happen and Trump is successful, the left in this country will once again return to the template of Trump being a mean old bully to North Korea. Waaaa Waaa Waaa!

Our Founders Failed to Consider Who Might Eventually Control Public Speech