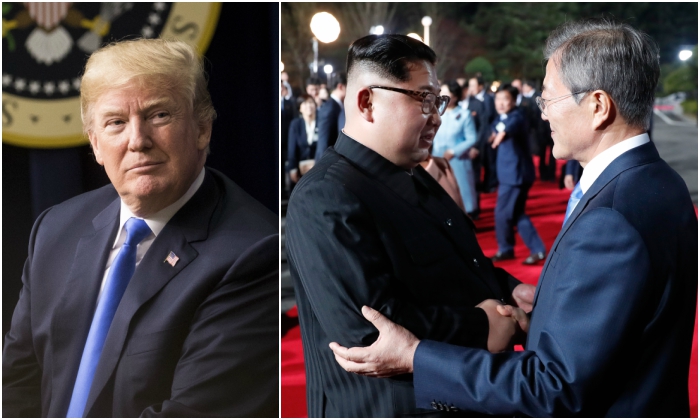 One of the many heinous crimes of which Donald Trump has been accused since he ran for office (no, his critics didn’t all bother waiting until he was actually elected President) is hastening the onset of World War III and the destruction of human civilization. I’m serious, unfortunately. Those obsessed with finding fault with President Trump’s every step have argued that, by “provoking” North Korean dictator Kim Jong-Un with demands that he abandon his nuclear weapons aspirations, our commander in chief has been stoking the fires of another war on the Korean peninsula. This, in turn, would surely lead to armed conflict with China, which would bring about the end of the world. Thanks, Trump!

It must have come as a terrible shock to these people when, not only did we all fail to perish in nuclear hellfire from Asia, but also Kim Jong-Un capitulated fully to American demands for denuclearization and has promised to end his nuclear weapons program, hopefully. He has also taken the historic step of crossing the border into South Korea to meet with his counterpart from the free part of the peninsula, and of agreeing to meet with Trump himself in Singapore later this year. It’s not magical or miraculous, but the result of applying an ancient doctrine. That doctrine is called “Peace Through Strength”, also known as standing up for your national interests as Ronald Reagan did instead of pursuing years of docile appeasement like Barack Obama. And it works.

What’s more, North Korea’s parliament recently moved to synchronize the country’s time zone with the South. The action was taken at Kim’s urging (in other words, he ordered it), for while in Seoul he found it “painful” to see two clocks hanging on the wall tracking time for a divided Korea. It’s truly amazing how warm a dictator’s heart can grow for his Korean people, when American-led economic sanctions have been devastating his nation for awhile. Kim’s angle is obvious: without nuclear weapons, he sees his best chance of staying on the good side of the US as cozying up to our ally South Korea, which shows he is probably serious about disarming, again hopefully. Kim Jong Un has been threatening to pull out at the last minute, but there may be a chance for peace.

Now, in recognition of his tough but unarguably effective stance in support of world peace, the United States Congress has nominated President Donald Trump for a Nobel Peace Prize. This is, frankly, an awe-inspiring accomplishment for a President who has been fought at virtually every turn by not only his political opposition, but also often various elements within his own party. According to these Never Trump enthusiasts, everything our President does is wrong at best and illegal at worst. For him to overcome this kind of entrenched partisan insurgency and stand nominated for a Nobel prize is remarkable.

After months long exchange of invective and threats of war between the U.S. and North Korea, the two Koreas held a historic summit at their peninsula’s heavily militarized border last month. President Trump has achieved an unprecedented victory for global peace and security; he has opened new avenues of cooperation, friendship and unity between the two Koreas — and the rest of the world. “After nearly two decades of gridlock and global anxiety surrounding North Korea’s nuclear program, we are now, at last, on the precipice of peace,” U.S. Governor Henry McMaster of S.C. and Governors from Alabama, Kansas, Maine, Mississippi and West Virginia, and the territory of Guam. The letter reads, “There is but one new variable: President Donald J. Trump and his successful policy of security through strength.”

Is it likely to come to a nomination and certainly many will dismiss it as a purely political maneuver (it is a Republican congress that nominated him). Furthermore, Trump still has a lot of work to do – draining the swamp and building the wall come to mind. He himself seems to realize this, as he has modestly sidestepped talk of him actually receiving the award, admirably stating that “peace is the prize”. And South Korean President Moon Jae-in, who has been suggested as a further possible recipient of the Nobel nod, has agreed that all the Korean peninsula really needs is peace.

But it’s nevertheless fitting to take a moment, now as the uncertainty of the tense showdown with North Korea winds down, to recognize and appreciate the hard, courageous work of President Trump. Against intractable opposition at home and abroad, he is delivering for the American people. And he deserves our gratitude and respect.

Why Does the Media Always Fall Into the Hamas Trap?

Daniel Greenfield: The Religion of Racism