I watched coverage of your appearance this past weekend at the United State of Women Summit which took place in Los Angeles, my hometown. In this appearance you took the opportunity to make yet another attack on women who are not like minded, stating,

“In light of this last election, I’m concerned about us as women and how we think. What is going on in our heads where we let that happen, you know?” 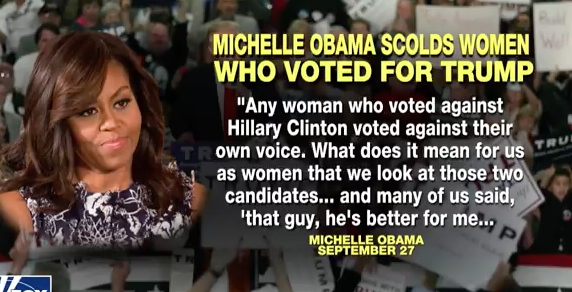 This isn’t the first time you’ve made such commentary. Such comments should make women ask, “What is going on with feminism that a former First Lady thinks it’s ok to lash out at other women for a difference of opinion?”

Mrs Obama, you frequently exhibit what is wrong with feminism and liberalism today.

I do not think the original feminists fought to replace men with women dictating how women should think, act and believe, but that is exactly what you, Hillary Clinton and many other women in the Democratic Party are doing today.

Being a feminist doesn’t mean that every decision a woman makes is based on gender. Being a feminist doesn’t mean you always favor or have to pick a woman over a man. Many women, like myself, vote on issues, not gender; on who we feel will do the best job. Sadly people like yourself and Hillary Clinton have degraded women who voted for Trump, alluding that these women are uneducated, unsophisticated, controlled by men, and many other demeaning assumptions.

Michelle, I was born and raised in Los Angeles, I was educated at a top ranked university, I’ve worked in liberal industries, my father died when I was 15, I only have a sister, I’m single, and for the most part, have had female bosses. In other words I don’t fit the stereotype of Trump supporters that you regularly promote, and I don’t have a father/brother/husband/male boss telling me how to vote.

Let’s call your behavior exactly what it is – bullying. You are attempting to bully women into believing the same as you, insulting them and questioning their feminism, in order to get women to fall in line with your agenda and vote the way you want them to.

I supported President Trump because of his positions on the issues, because we needed a big change from your husband’s eight years in office. We needed someone that was from outside the establishment, not a woman who is the swamp – part of one of the most famous political families, with a history of scandal and corrupt practices. I too want to see a woman elected President of the United States, but I want the RIGHT woman.  I will not vote for someone solely because of their gender, or even their race. Such behavior is sexism and racism, two things that I thought you were against.

I know you talk about Hillary’s “qualifications” to mask the emphasis on selecting someone based on gender. There is no denying that Hillary has quite the political resume. She’s well educated, has spent decades in the political world. When looking at someone’s resume though, you have to take into account the negatives, not just the positives. Benghazi, The Clinton Foundation, the Clinton email scandal – just a few of the many issues that have surrounded Hillary in recent years.

One also does not have to have a lifetime in politics to be suited for the job. You conveniently overlook Donald Trump’s resume as a successful businessman. You also seem to forget that your husband was elected with a very small political resume.

This bullying mentality by liberal women has done more damage to feminism than the actions of any man today. You should know better than to use stereotypes, and to categorize and demonize women who see the world differently than you. If a woman wants to be liberal, that is her choice, and she should come to that decision without the pressure or fear that comments like yours instill in many women. If a woman wants to be conservative, she should be respected for that decision, not degraded or labeled. True feminism comes from making informed, independent decisions, not being guilted into choosing based on gender.

It is important to be aware of one’s own hypocrisy, even more so when attempting to dictate to others. Did you forget that in 2008 you picked a man over a more qualified woman? That woman who you tout today, which you use as the basis of attacking conservative women, is the same woman you and your husband demonized not that long ago, and who lost the Democratic primary to a less qualified man? I guess voting for a woman, a candidates qualifications, and having the first woman President of the United States wasn’t that important to you a decade ago.