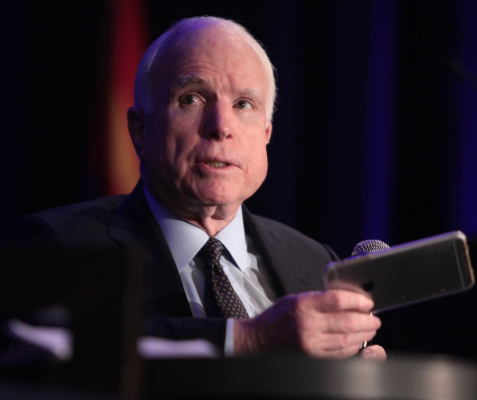 Here we go again. More fake outrage from the liberal media!
It must be a very slow news day as Friday’s headlines come from comments that at a private staff meeting this morning, White House Aide Kelly Sadley stated Senator John McCain’s opposition to one of Trump’s nominees “doesn’t matter”, because “he’s dying anyways”.
Was it a harsh and rather cold statement about a current Senator who is fighting cancer? Yes. Is it worth all this hoopla and calls for the resignation of Sadley? No.
Senator McCain is very ill. He’s battling a very aggressive form of brain cancer and realistically has little time left. Sadly McCain has chosen to use these lasts months to play partisan politics and continue to deride President Trump’s agenda. Reports this past week stated that he had made it clear that President Trump is not allowed to attend his funeral. McCain has gone out of his way to make public statements to undermine President Trump’s nominees and undermine policy efforts of the Trump administration, even when he’s unable to be physically present on Capitol Hill.
I’m a firm believer that if you can dish it, you better be able to take it. Senator McCain might be terminally ill but he is choosing to stay in the political ring and play ugly politics. One cannot jump in that ring and then say “You can’t hit me back, I have cancer” or cry foul whenever anyone makes a less than desirable comment.
I wish Senator McCain would let the politics go and spend the time he has left in a peaceful environment with his family. In the end, that is what really matters most. What is even worse is that McCain’s actions this past year has really unraveled his reputation and the respect that many in his Party and in this Country have had for him. The once “Maverick” seems to be more a Democrat than a Republican, and seems as if he’s working on behalf of a grudge against Trump, who was elected to an office he once sought, but never acquired.
I worked on his 2008 Presidential campaign, as a grassroots leader. He was my pick from the start. I admired his story, his courage, his fight. Sadly in that 2008 campaign, we saw very little of that John McCain. McCain was criticized for not hitting at his opponent, Barack Obama, harder, something that obviously worked well for Donald Trump in 2016.
Since his loss in 2008, he’s not been the same. I have found myself extremely disappointed in his actions and behavior as a Senator ever since. I’ve been disappointed in a man I spent many hours campaigning for, and admired. If anything, he has shown many of his former supporters that he too is a part of the Swamp.
I understand that the family, such as Meghan McCain, would be upset with such comments. That’s her father that is being talked about. At the same time, she’s been in the political world long enough to know that this isn’t worth the attention it’s getting.
How Kelly Sadley’s comments got leaked to the press, we can only guess. This wasn’t a public statement that was made, this was made in what was believed to be a private meeting. It wasn’t tactful commentary, but there is truth in it. How many of us have been in a private setting, be it a work related meeting, or even with personal friends, and said something that was truthful but wasn’t exactly the type of thing you’d say in public. The relationship between Trump and McCain has been and continues to be contentious.
Sadley’s comment wasn’t meant to be public, it wasn’t said to John McCain, and not even to the press. I can only imagine other elected officials, staff and press, especially those who are in opposition to John McCain, have made similar statements privately. Sadler shouldn’t lose her job over this.
Senator John McCain should really think about how he wants to spend what could be the finals months of his life. I understand dedication of a lifelong public servant and the drive to continue serving his Country, but there is a time to let go. His efforts now are looking like bitterness not commitment. DC will go on without McCain, policies will change, leaders will change, and the world will march on. He can’t control what happens after he is gone, none of us can. For his sake, his family, and his legacy, he should really ask himself if wading in the swamp, playing politics, is really the best way to spend his final days.
Share
Facebook Twitter Pinterest Reddit Share via Email Print