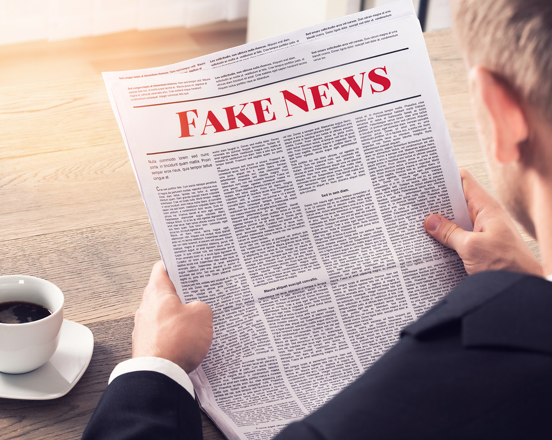 I don’t like the term ‘fake news.’ I certainly understand why President Trump describes the media that way, but it is somewhat of a misnomer that doesn’t quite capture the seriousness of what is truly transpiring.

Fake news is something along the lines of Weekly World News. It isn’t meant to be taken seriously. It’s humor/satire. If they wrote an article saying President Trump flew to Mars to negotiate a Peace Treaty with the Klingons no one sane person would take it seriously because it’s preposterous. It’s fake. It’s harmless.

What isn’t harmless are major news outlets who hold themselves out to be legitimate sources of news, consistently reporting events in an extremely biased fashion. That can apply to both left-leaning and right-leaning news sources who don’t specifically state any affiliation. Sites like CNN, Fox News and other supposedly objective news sites, in theory, should be impartial. How many articles appearing in supposedly impartial news sites actually report the news without interjecting opinion? More often than not, facts are skewed or omitted so they either condemn or glorify the persons involved.

Journalism has devolved to the point where it’s basically unheard of to see an article that is well-researched, let alone one that impartially provides relevant historical and political context so one can better understand why events unfold in a particular manner. We are rarely if ever, presented with all sides of a story, only selected parts of it.

Journalism in general has stopped adhering to ethical codes of conduct. A profession is only as good as its code of conduct and the way news is now reported is disturbing beyond belief because it’s completely and utterly reckless. Furthermore, it has reached a point where even journalists/reporters themselves aren’t immune to the monster that they helped create.

I think a good way to gauge just how sinister something has become is watching how it treats its own. When an institution has no qualms about turning on its own members if it furthers the larger agenda, we are left with something that clearly doesn’t represent democracy, let alone something capable of defending and preserving it.

I despise any kind of sexual misconduct just like any normal human being. It is a very serious matter and should never be taken lightly. Adding to the severity of this type of crime is the difficulty in proving it. Call me crazy but there is no way I’d go around telling the general public that someone is guilty of or implying that they engaged in sexual harassment if my only ‘proof’ is the word of someone else who may or may not be telling the truth.

Take the case of Tom Brokaw. If we wanted to convict him of being a liberal, there is no shortage of evidence. But when it comes to him supposedly engaging in sexual harassment 20 years ago, if I’m the editor of a news organization I wouldn’t report it.

First, why would the victim wait so long to come forward? Second, what proof does the accuser have that this occurred? I’d only report it as news if charges were actually brought against Brokaw by a prosecuting attorney and even then I’d be careful what I said because I really don’t like things like slander and libel, it today’s social media sounds tends to render those concepts hard to enforce.

It really wouldn’t be hard to write up something that appears to be a legitimate news article and share it on Facebook. Sadly, it really would be difficult to distinguish something written by a mainstream news organization and a story written someone who made the whole thing up. If something appeals to you, it will probably appeal to most of your friends…birds of a feather.

How many people even bother to check whether something is even true? If something supports your point of view why would you try to disprove it? I’ve seen many things shared on social media that have no basis in fact. I find the way people interact with one another on the internet, especially over political issues, to be vulgar and absent of any decorum or respect. Civility is thrown out the window. Most discussions that I see quickly devolve into childish name calling and arguments that are extreme, incredibly misinformed, or just plain nonsense. Usually, everyone ends up looking like a fool.

I don’t think it’s a crisis of fake news as much as it is a crises of irresponsible news. Reporting the news is now secondary to trying to make us think a certain way. There is an overall agenda and that agenda is dangerous. If you look at the big picture, here is the agenda:

What America can’t endure is the destruction of the Constitution. Make that mistake and there is no turning back.

Escaping the Racism of Low Expectations

Henry Davis: "I Ain't Never Been a Mo-F-in Slave!"