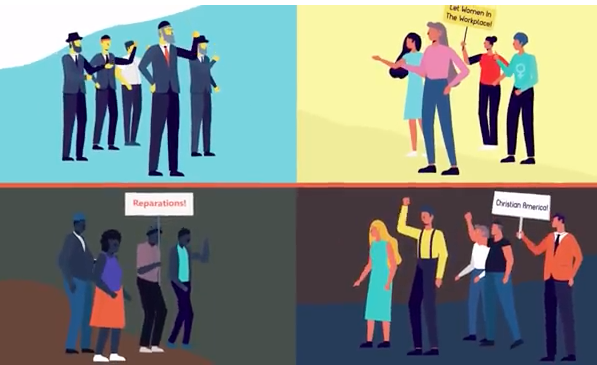 There has been a lot of talk about identity politics and why/how it became such a prominent component in today’s public discourse. Perhaps the best way to do that is to take a look back at the past 100 years and observe the ideologies that have brought us to this point.

The first “modern” progressives came to prominence around the time that the industrial revolution in America moved into high gear. Urban centers grew, industrial employment brought formerly rural workers into those cities along with their families. Schools, instead of being the center of a small rural community with, perhaps, one or two teachers hired by the parents of the students and entirely controlled within that small community, began to transition to scattered schools administered by municipalities that hired teachers and administrators and managed them through appointed or elected local boards of education. Around this same time, progressive philosophers such as Dewey and Zinn began to influence the teaching of history, leading the subject to become one predominantly based on economics and class distinctions…the have and the have-nots, so to speak.

It is interesting to note that within a couple of decades many of the history books used in American schools were re-written by progressive academics – many new books published in the late 1920s – with this new emphasis on economic aspects as the driving force in shaping 20th century history. Money and class began to be blamed for nearly any historic event. In fact, in many cases, today’s history textbooks that contain any sort of footnoted references to source documents refer not to the original sources but often to the “revised” texts published in the 1920s. Seldom do K-12 history texts of today contain any references to original (pre-1900) sources (if the offer any source notes at all).

Keep in mind that the entire “Progressive” movement takes its name from the fact that while its roots are in the communist revolutions of the 1917 Bolshevik sort and the writings of Karl Marx, it differs from a “revolutionary” group in that it is based on a philosophy of reaching the same goal as the revolution via “progressive” change over a long period of time. Here we are 100 years later and the progress has been substantial. Recent polling shows that those in the 18-39 age bracket known as millennials include over one-third who believe that socialism would be a better system than capitalism.

Later in the 20th century, following the period of riots, anti-war protests and such, a new generation of socialistic viewpoints like those of Saul Alinsky, Bill Ayers, and the Cloward-Piven’s duo began to accelerate progressive efforts. As that generation gained age and political influence, the likes of Bill and Hillary Clinton entered the arena of politics prepared by those like Woodrow Wilson and Franklin Roosevelt who installed progressive judges in our court systems with the intent of expanding government control through extreme interpretations of our constitution guiding us toward central control of society.

In the mid-60s, Lyndon Johnson made a calculated effort to insert a very large divider between the black and white community through the creation of his Great Society initiative. Around the same time, additional divisive measures such as Affirmative Action began to appear in the employment and education realms further placing emphases on various sub-groups in our society and their differences rather than their commonalities.

Saul Alinsky’s revolutionary tomb known as “Rules for Radicals” was dedicated to Lucifer. Its entire emphasis was founded upon a foundation of “divide and conquer”. He proposed that by playing several different groups against each other, the strongest group could begin to control all the smaller groups and thereby take control over the entire society. Again, his was a patient and progressive process.

Around the same time, two academics Richard Cloward and Frances Fox Piven proposed a progressive strategy that would lead America toward a guaranteed annual income that was intended to end poverty. However, it was based on the idea that by creating situations that overloaded the systems of government these efforts would result in the eventual collapse of those systems which could then be replaced by a socialistic system where all would be made equal through economic controls on income and its distribution. It has, over the past forty or more years begun to appear as a possible success as the percentage of people in the country working and paying taxes into the system continues to decline while the number of unproductive citizens climbs to nearly half the country’s population. The tipping point approaches.

Both Clintons, Jimmy Carter, and most recently Barrack Obama heaped on the pressures and divisive policies that have pitted various racial and economic groups against each other. All of their efforts aligned with both the Alinsky approach of playing such groups off of each other to keep them squabbling and the Cloward-Piven effort to overload the system in such a way as to provoke a final revolutionary change to our country.

The next twenty years, I believe, will do one of two things. It will either bring about a restoration of a common belief in our constitutional republic’s founding principles of equal opportunity and equality before the law, or it will prove the success of the progressive approach to, as Barack Obama coyly stated in 2008, fundamentally transforming the United States of America. Obama’s eight years in control of our government showed a marked acceleration of this negative effort and a resurgence of racial and economic warfare between ethnic and economic groups. It was almost as if his followers could smell the victory nearby and wanted one more push to carry them to victory. Hillary Clinton was the standard-bearer intended to carry them across the finish-line. Fortunately for our country, Donald Trump cut her off at the pass.

Recent polling has begun to show a noticeable uptick in support for the conservative changes that have begun to bear fruit for all of America, including within racial and economic minorities. Unemployment among minority communities are at all-time lows and our economy has been improving steadily since he took office. Recent tax cuts have put more money in nearly everyone’s pocket.

There are many among the ranks of progressives (known today as Democrats) who still cling to the hope that they can re-create this country in the manner proposed by Marx and other socialists. The flaw in their plans might just be the unifying force that economic well-being seems to produce. What socialists cannot seem to accept is that “the economy” is not operating as a “zero-sum” game. As the economy grows, and freedom with it, the economic basket begins to grow with it and lifts all who choose to participate in it in direct proportion to the level of effort put forth. If we want to benefit, however, we must put effort into getting there. If we continue to convey this future to all within earshot, identity politics can and should be defeated.

Storm Clouds on the Horizon for Stormy Daniels?

Daniel Greenfield: How Not to Get Shot by a Soldier