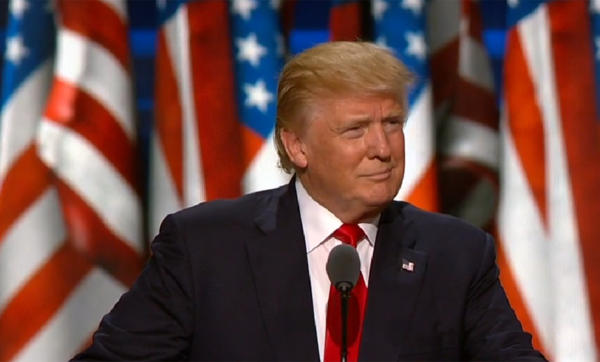 It’s really not that complicated.

But President Trump’s Syria strikes have reopened the debate over what defines his foreign policy. Is he an interventionist or an isolationist? Foreign policy experts claim that he’s making it up as he goes along.

But they’re not paying attention.

President Trump’s foreign policy has two consistent elements. From threatening Kim Jong-Un on Twitter to moving the embassy to Jerusalem to bombing Syria, he applies pressure and then he disengages.

Here’s how that works.

First, Trump pressures the most intransigent and hostile side in the conflict. Second, he divests the United States from the conflict leaving the relevant parties to find a way to work it out.

Nukes are the only thing keeping North Korea from being just another failed Communist dictatorship.

Instead, Trump called North Korea’s bluff. He ignored all the diplomatic advice and ridiculed its regime. He made it clear that the United States was not afraid of North Korean nukes. The experts shrieked. They warned that Kim Jong-Un wouldn’t take this Twitter abuse and we would be in for a nuclear war.

But the Norks folded.

Trump accomplished more with a few tweets than previous administrations had with billions of dollars.

An instinctive negotiator, Trump’s realpolitik genius lay not in ideology, but in grasping the core negotiating strategy of the enemy and then negating it by taking away its reason not to make a deal.

When Trump called North Korea’s bluff, its nuclear weapons program was transformed from an asset that it used to blackmail aid from its potential targets into a liability that could end with its destruction.

Trump did the same thing with Jerusalem.

The PLO had refused to make a deal with Israel because its constant refusals to negotiate allowed it to keep escalating its demands. The more it sabotaged negotiations, the better the offers became.

The PLO’s Palestinian Authority didn’t have nukes, but its weapon of choice was terrorism. And it had played the same game as North Korea for decades. It would begin negotiations, demand payoffs, then sabotage negotiations, threaten violence, and demand an even higher payoff for ending the violence.

The PLO/PA knew that it could get the best possible deal by not making a deal.

Just like North Korea, Trump cut the PLO down to size by negating its negotiating strategy. Instead of the deal getting better and better, Trump showed that it would get worse by taking Jerusalem off the table.

Previous administrations had rewarded the PLO/PA for its refusal to make a deal by sweetening the pot. Instead Trump threatened to take away Jerusalem, the biggest prize in the pot. And then he warned that the PLO would lose even more of its demands if the terrorist group continued to refuse to make a deal.

Unlike Clinton, Bush and Obama, Trump did not overcompensate for the US-Israel relationship by pressuring the Jewish State to make a deal with the PLO so as to seem like an “honest broker”. Instead he leveraged that relationship to move the United States away from the conflict.

Moving the embassy to Jerusalem sends the signal that the US-Israel relationship doesn’t depend on a deal with the PLO. That’s the opposite of the messages that Clinton, Bush and Obama had sent.

Their old failed diplomacy that made the US-Israel relationship dependent on a deal with the PLO had given the terrorists control over our foreign policy. The US and Israel were perversely forced into appeasing the terrorists of the PLO just to be able to maintain a relationship with each other.

Trump kicked the PLO out of the driver’s seat. And the terrorist group is becoming isolated.

Saudi Arabia and its allies are much more focused on Iran than the old proxy war against Israel. And, for the moment, that leaves the PLO with few allies. If it doesn’t make a deal, then the United States will rebuild its relationship with Israel around regional security issues. And the Saudis have signaled that they are willing to do the same thing. Then everyone else exits the conflict except Israel and the PLO.

Trump left it to the South Koreans to decide the conflict with North Korea. Ditto for Israel.

The United States will put forward proposals, but the long game is to get America out these conflicts. And Trump does that by turning the United States from an eager mediator to a bully with a big stick.

He made it clear to Kim Jong-Un that he would have a much easier time negotiating with South Korea than with America. And he’s made it equally clear to the PLO that it’s better off turning to Israel than to its allies in the State Department. The message is, “You don’t want to get the United States involved.”

Previous administrations believed that the United States had an integral role in resolving every conflict. President Trump’s America First policy seeks to limit our involvement in foreign conflicts without robbing us of our influence by making those interventions as decisive and abrasive as possible.

It breaks every rule of contemporary diplomacy. But it has plenty of historical precedents. And it works.

So, just like in North Korea and Israel, he sent a decisive message of strength.

The strikes were a reminder that unlike his predecessor, he was not afraid of using force. But just as in North Korea and Israel, the show of strength was only a lever for disengaging from the conflict.

Instead, Trump wants to bring in an “Arab force” to stabilize parts of Syria. That would checkmate Iran, split Syria between the Shiites and Sunnis, and ‘Arabize’ the conflict while getting America out of it.

The threat of more strikes would give an Arab force credibility without an actual American commitment.

The debates over chemical attacks were never the real issue. Keeping weapons like that out of the hands of terror-linked states like Syria is good policy. But there was a much bigger picture.

Iran took advantage of the Obama era to expand its power and influence. Trump wants to roll back Iranian expansionism while limiting American exposure to the conflict. Once again he’s using a show of strength to mobilize the local players into addressing the problem while keeping his future plans vague.

Assad’s biggest reason for refusing to make a deal was that Iran’s backing made his victory inevitable. Iran and Hezbollah had paid a high price for winning in Syria. But they were unquestionably winning. The only thing that could change that is direct American intervention. And Trump wants Assad to fear it.

Trump is offering Assad the rule of his country. But to get it, he has to dump his biggest partner.

When Trump came into office, the two bad options were arming the Sunni Jihadis or letting Iran’s Shiite Jihadis win. Instead Trump has come up with a third option. Either keep the war going or force a deal.

Either the conflict will drag on, but with minimal American involvement. Or Assad will sell out Iran.

None of these are ideal options. But there are no good options. Not in North Korea, Israel or Syria. The Norks and the PLO aren’t likely to reform. Syria, like Iraq, will stay divided between feuding Islamic sects. None of these problems will go away at the negotiating table. And Trump understands that.

Trump is too much of a dealmaker to believe in the unlimited promise of diplomatic agreements. He knows that it takes leverage not just to make a deal, but to keep it in place. And he doesn’t believe that the United States can make a deal work when a key player really doesn’t want the deal to happen.

Trump’s Art of the International Deal identifies the roadblocks to previous agreements, breaks them down, puts the local players in the driver’s seat and then makes fixing the problem into their problem.

Are There Really Racial Disparities in School Discipline?

The Candace-Kanye Black Revolution Against the Left