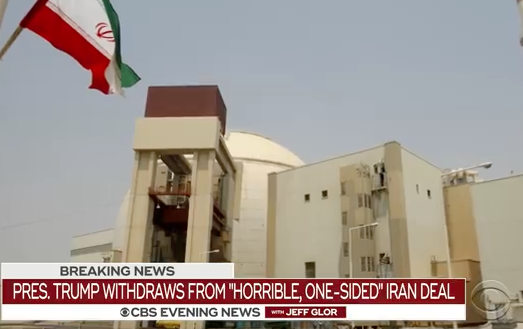 On January 12, 2016, Iran’s IRGC terror force seized 2 US Navy vessels, extracted classified information from their crews at gunpoint, broadcast images of American sailors on their knees and forced an officer to read an apology. A day later, the Islamic terror state released its American hostages.

Three days later, Implementation Day lifted sanctions on Iran. By next month, Iran was claiming that it had received over $100 billion in sanctions relief.

It was not the last ransom payment linked to the nuclear deal.

On January 17, Obama illegally airlifted $400 million in foreign currency on unmarked cargo planes to the IRGC as a down payment on a $1.7 billion ransom for four American hostages being held in Iran.

Since then, Iran has taken more American hostages.

President Trump made it clear that there will be no more dirty deals and payoffs. “America will not be held hostage to nuclear blackmail.”

The hostage he set free was American foreign policy. Obama didn’t ship $1.7 billion to Iran because he cared about the four American prisoners or the Navy sailors. They were just icing on the yellowcake. Iran wasn’t able to dictate to the White House because it was holding American prisoners as hostages, but because it had imprisoned Obama’s Nobel Peace Prize and was holding his beloved legacy hostage.

Obama allowed Iran to take over Syria, Iraq and Yemen to protect the nuke scam. He let the terrorists of the IRGC, which he had protected from sanctions in the Senate, humiliate our sailors while one of his minions, John Kirby, currently working as a CNN analyst where he’s doing his part in the echo chamber to defend the deal, claimed that our Naval personnel weren’t protected by the Geneva Convention.

(And that’s from an administration which believed that the Geneva Convention protects terrorists.)

The billions he poured into Iran rescued the regime and allowed it to hold off the next wave of political protests. The Iran deal killed Iranians, Yemenis, Syrians, Iraqis, Americans and Israelis. It shredded our national security while putting the political power of the White House behind our greatest enemy.

Obama allowed Iran to get away with anything and everything because after the failure of the Arab Spring’s gamble on Sunni Islamists, he bet his whole foreign policy on the Shiite Islamists of Iran. He alienated our allies, waged a political war against Israel, used the NSA to spy on domestic opponents of the deal, including members of Congress, and lied repeatedly to the American people about the deal.

Years of lies, betrayals, payoffs and crimes, the fortunes spent by the Rockefeller Brothers Fund and Ploughshares, the Ben Rhodes echo chamber deployed across the media, died in one afternoon. On the anniversary of Victory in Europe Day, President Trump defeated another totalitarian ideology.

And he did it with the weapon that leftist liars fear the most, the truth.

In 1,251 words, President Trump destroyed every lie uttered by Obama Inc. about the deal.

Iran’s government isn’t moderate. It’s “the leading state sponsor of terror”. The deal doesn’t stop Iran from getting a bomb. “Even if Iran fully complies, the regime can still be on the verge of a nuclear breakout in just a short period of time.”

It doesn’t stabilize the Middle East. “If I allow this deal to stand, there would soon be a nuclear arms race in the Middle East. Everyone would want their weapons ready by the time Iran had theirs.”

The deal isn’t working because the, “inspection provisions lack adequate mechanisms to prevent, detect, and punish cheating and don’t even have the unqualified right to inspect many important locations including military facilities” so that we have no idea what Iran might be doing.

And the deal funds Iran’s nuclear program, ballistic missile program and terrorism around the world.

In the hours and days before the announcement, Obama Inc.’s Iran Firsters frantically filled the airwaves with dire warnings about what will happen if we pull out of a worthless agreement. An agreement that they tell us is “working” even while the details of the deal and its inspections are classified so that no one except Iran, the IAEA and a psychic in a Venice Beach storefront knows what’s really going on.

If the deal were working, it wouldn’t need to be secret. The only reason to hide every meaningful piece of information is to cover up the truth that Iran’s nuclear program continues to tick ahead every day.

The deal doesn’t stop Iran from getting a bomb. It ensures that Iran will get a bomb.

As President Trump put it, “The Iran deal is defective at its core. If we do nothing, we know exactly what will happen. In just a short period of time, the world’s leading state sponsor of terror will be on the cusp of acquiring the world’s most dangerous weapons.”

Withdrawing means that the United States will no longer be a party to that lie. The cover-up is over. Our credibility, integrity and foreign policy will no longer be held hostage to a worthless promise in Tehran.

But it’s not just a symbolic cleansing.

President Trump made it clear that he intends to force Iran into a deal that will actually shut down its nuclear program. And he’ll do it the same way that he did with North Korea, by restoring credibility and applying pressure. Pulling out of the deal restored credibility. Until Trump’s statement, Iran and its allies, the Europeans and the Russians, could have believed that the Obama status quo would continue.

The speech sent a message that the free ride is over.

America does not negotiate in bad faith. We’re not suckers, stooges or patsies. And we will walk away from a bad deal. That message isn’t just for Iran. It’s also for North Korea. We’re through being played.

“The United States no longer makes empty threats. When I make promises, I keep them,” Trump said.

North Korea got the message. Iran got it. And the Europeans got it. So did our allies.

Obama protested the move by posting on Facebook that dumping the nuke scam, “turns our back on America’s closest allies.” But it was his corrupt regime that turned its back on our closest allies.

By joining up with Iran, he betrayed the vast majority of our allies in the Middle East who opposed it. And when Israel protested his betrayal, his administration spied on Prime Minister Netanyahu, attempted to tamper with his reelection, insulted him in public, used anti-Semitic rhetoric against Jewish domestic opponents and employed the NSA to eavesdrop on their conversations.

President Trump honored that oath, faced the tough truth and turned his back on Obama’s dirty deal.

“There has been enough suffering, death, and destruction, let it end now,” President Trump concluded.

John McCain, Perhaps It's Time to Let Go Of All That Bitterness...