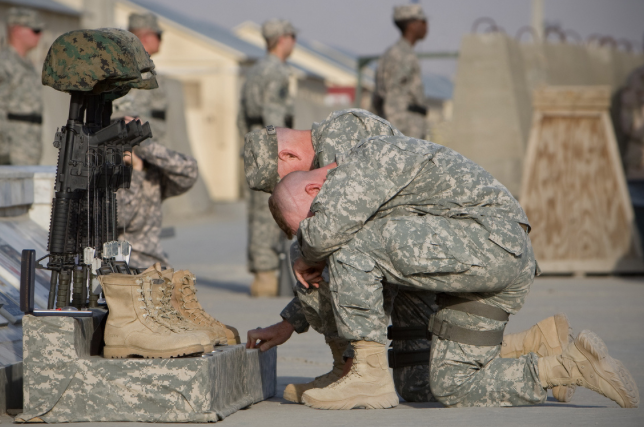 The warrior’s tale is a simple enough thing. Strong as steel, but fragile as chance. It is the wind in his soul and the wall we build around ourselves to tell us who we are.

Before there were cities or nations, and railways and airports, computers and telephones– the tale was told around campfires. Acted out in pantomime, dressed up in animal furs and cave paintings. But the tale was the same. The people were confronted with a threat and they called upon the best and strongest of their men to go out and fight it. These were their warriors. What they did in the face of that threat is the tale.

The tale has many variations. Sometimes there are many warriors, sometimes only a handful. They march into the village of the enemy in triumph, or they make a last stand on a rocky outcropping, spending the last of their heart’s blood to buy time they will never know. There is the weak man who becomes strong, the strong man who becomes weak, the woman who mourns the man who will never return, and the man who goes off to battle with nothing to lose. These tales have been told countless times in the ages of men, and they will be told again for as long as men endure.

It is not only the warriors who need the tale, or those left behind. Future generation learn who they are from this tale. “We are the people who died for this land,” is the unseen moral of each tale. “We bled for it. We died for it. Now it is yours to bleed and die for.”

The warrior’s tale tells each generation that they stand on the wall against a hostile world. And that the wall is made not of stones, but of their virtues. Their courage, their integrity and their craft.  Theirs is the wall and they are the wall– and if they should fail, then it will fail. And the land and the people will be swept away.

What happens to a people who forget the warrior’s tale and stop telling it around their campfires? Worse, what of a people who are taught to despise the figure of the warrior and what he represents? They will not lose their courage, not all of it. But they will lose the direction of that courage. It will become a sudden unexplained virtue that rises to them out of the depths of danger. And their wall will fail.

It is the warrior’s tale that makes walls. That says this is the land that we have fought for, and we will go on fighting for it. It is sacrifice that makes mere possession sacrosanct. It is blood that turns right to duty. It is the seal that is above law, deeper still to heritage. Anyone can hold a thing, but it is sacrifice that elevates it beyond possessiveness. And it is that tale which elevates a people from possessors of a land, to the people of the land.

Universalism discards the warrior’s tale as abomination. A division in the family of man. Their tale is of an unselfish world where there are no more divisions or distinctions. Where everyone is the same in their own way. But this tale is a myth, a religious idea perverted into totalitarian politics. It is a promise that cannot be kept and a poison disguised with dollops of sugar. It lures the people into tearing down their wall and driving out their warriors.  And what follows is what always does when there is no wall. The invaders come, the women scream, the children are taken captive and the men sit with folded hands and drugged smiles dreaming of a better world.

The warrior’s tale explains why we fight in terms of our own history. The Great Swamp Fight. The Shot Heard Round the World. The Battle of New Orleans. Gettysburg, San Juan Hill, Belleau Wood, Pearl Harbor, Heartbreak Ridge, the Tet Offensive, Kandahar, and Fallujah. Generations of sacrifices must be defended. And those who wage war on us must be made to pay.

Universalism demands that war must answer to universal aims and objectives. That there is a universal law higher than war. But this is a children’s story. The laws of men derive from their own interests. Those who can rule by force or coalition make their laws to serve their own ends. This is the way of the world.

Those who pretend to live by universalism will still fall to the law of steel. Rhetoric is no defense against fire and lead, and international codes have no defense against those who will break them. The talk may go on, but it is the warriors who will end it. It is still the warrior’s tale to tell, even if all others have forgotten it.

The warrior’s tale is no happy thing. It is bitter as bile and dark as death. But it is also a grand and glorious thing. For even in its full naked truth, it is the story of perseverance in the face of every agony and betrayal. It is the tale of how we live and why we die.

Even when all others forget their tale, the warriors remember. Even when they are called peacekeepers and turned into an army of clowns for the satisfaction of their political masters. The armies may decay, but warriors still remain in their cracks, on their edges– men who are not wanted, but are needed because they are the only ones who can do the grim work and do it well. They may only be a hundredth of an army, or a thousandth. A fraction of a fraction. But without them there is no army, only empty uniforms.

When the warrior’s tale is forgotten, then they become shadows. Dangerous men despised and feared. Thought of as killers, dismissed as monsters and stared at like beasts in a cage. But the society cannot deny them. It cannot deny that part of them. When the warrior diminishes, the energy is directed elsewhere. Sport becomes an obsession and matches end in bloody violence. Crime increases. Prisons fill up. So do police forces.

As the external war fades, the internal one begins. Barbarians come from without. Buildings burn, mobs rage and there is a savagery in the air.

No law can protect a society that has forgotten the warrior’s tale. It will turn outward, and adopt the warriors tales of outsiders. The samurai will replace the cowboy. The sports star will be an outsider. Its heroes will become foreigners. Men who will do understand the virtue of violence and will do what their own have been forbidden. Who have the vital energy that a society without a warrior’s tale lacks.

The day will come when they are asked who they are, and they will not know. They will point to their possessions and the names of their streets and cities. They will speak of higher ideals and cringe for not living up to them. They will be asked why they fight, and they will say that they do not want to fight. That all they want is peace at any price.

Even the most powerful of civilizations with the mightiest of cities becomes prey when it forgets the warrior’s tale. It takes more than weapons to defend a city, it demands the knowledge of the rightness of their use. It is no use dressing men in uniforms and arming them, if they are not taught the warrior’s tale. And it is nearly as little use, sending them off to watch and keep, if the men above them discard the warrior’s tale as violent and primitive gibberish.

An army of millions is worth little, without the warrior’s tale. Strategy is technique, firepower is capacity, both begin and end with the human mind. “Why do we fight,” is the question that the warrior’s tale answers far better than any politician could. “We fight because this is ours. It is our honor, our duty and our war. We have been fighting for hundreds and thousands of years. This is what makes us who we are.”

This is the quiet war between the philosopher merchants who want trade and empire, and the warriors who know that they will be called upon to secure the empire, and then die fighting the enemy at home. It is how the long tale that begins with campfires and ends with burning cities goes. The story that begins with cave paintings and ends with YouTube videos. Whose pen is iron, lead and steel. And whose ink is always blood.

We have been here before. Told and retold the old stories. The forest, the swamp, the hill and the valley. And behind them the lie, the maneuver and the betrayal. The war that becomes unreasoning and the people who forget why they fight. And one by one the warriors slip away. Some to the long sleep in the desert. Others to secluded green places. And still others into the forgetfulness of a people’s memory. The hole in the heart of a people who forget themselves and become nothing.