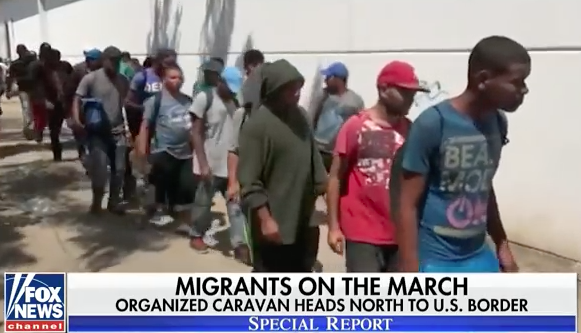 The invading caravan from Central America finally reached the United States. Some members of the caravan crossed the border illegally and were arrested. Others may have made it through undetected.

Still others openly applied for asylum and had their applications processed at the San Ysidro port of entry at the border. They were selected by the radical anti-American group, Pueblo Sin Fronteras, as the best representatives of their invasion of the United States. Others just headed straight for the hills.

The Goat Canyon area has one of the biggest gaps and is a popular crossing spot for illegal migrants. There’s an 8-foot tall fence in poor condition and a woefully incomplete secondary fence. Fencing in the area dates back to Operation Gatekeeper in the 90s which reduced migrant traffic, but didn’t stop it. After leveling hills and building miles of fencing, the area is still a dangerous illegal alien magnet. Chemical and sewage dumping from Mexico made parts of the area too hazardous to patrol. It’s so bad that Border Patrol personnel have become ill and an environmental group called off a cleanup because of the high fecal content. One agent experienced chemical burns in his lungs while checking a grate.

Goat Canyon is one of the most compelling arguments for Trump’s wall. And for more than a wall.

Migrant alien males can cross illegally. Families usually turn themselves in to the Border Patrol and are quickly released because there are no local facilities to detain them, turning border patrol personnel into coyotes. But this time the Justice Department decided to send a message to the illegal caravan.

11 members of the caravan who crossed illegally were charged. Many were arrested crossing in groups with other illegal aliens from around the world. 6 out of 7 arrested by one agent were from El Salvador, the home of the violent MS-13 gang which has been taking over parts of America. Another arrest took place with three illegal migrants from India. Goat Canyon had previously hosted large groups of gypsies.

The DOJ had made it clear to caravan members that they would be arrested. But because of the law, they can only be charged with a misdemeanor. Only Olvin Herrera-Romero, who was identified as having been previously deported to Honduras in 2008 through his fingerprints, can be charged with a felony.

Building a physical wall is important. But so is building a legal wall.

Illegal entry should not be a misdemeanor. A petty misdemeanor has no meaningful deterrent effect. Illegal migrants, their lawyers and overwhelmed courts view the matter as a routine formality. The sentences are almost the same as those from almost a century ago when the problem was different.

But the biggest hole in our immigration security is still asylum law. And a wall alone can’t fix it. Immigration law allows any alien to show up at the border or at an airport and apply for asylum. Ramzi Yousef, the Islamic terrorist behind the World Trade Center bombing, flew into JFK Airport, applied for asylum and was released into New York City. And you can’t build a wall around JFK Airport.

And even with a wall, illegal migrants will still be able to show up at the border and apply for asylum.

The roots of the problem go deep. United States asylum law derives from the United Nations. The 1951 UN refugee convention and the 1967 protocol, to which we became a signatory in 1968, have been baked into our legal codes. Article 3 precludes a Muslim travel ban, Article 16 mandates free legal aid for refugees, Article 17 requires allowing a refugee to work, Article 22 mandates free education, Article 23, welfare, Article 26, travel anywhere within the United States, Article 28, travel outside the country, Articles 32 and 33 make deportation very difficult, and Article 31 prohibits imposing, “penalties, on account of their illegal entry or presence, on refugees”. United States courts have debated how to interpret these articles, but a leftist Supreme Court could easily use Article 33 to open up our borders.

And we would be obligated to process and possibly take in every refugee anywhere in the world.

When Germany’s Angela Merkel said, “The right to political asylum has no limits on the number of asylum seekers,” she was indirectly referencing the legal obligations of the UN Convention.

All it would take to reduce America to Germany would be for the courts to force our government and laws into full compliance, instead of only partial compliance, with a UN convention we signed on to.

Our refugee approach is based on our good intentions after WW2 and during the Cold War. When we opened our doors to refugees, we meant to take in people fleeing Communism, whether it was Czechs, Hungarians, Cubans, Jews or other authentic refugees. Today, refugee usually means economic migrant from a non-democratic country, a country suffering from natural disasters, a civil war or crime.

That’s most of the planet.

And refugee resettlement is big business. It’s also a means for eroding the voting rights of Americans.

California took in so many migrants and refugees that it no longer has free elections. It’s a corrupt one-party state teetering toward bankruptcy that outside its wealthy tech and entertainment enclaves has more in common with the banana republics south of the border. The latest caravan will only make it worse. More people are leaving California than coming in. And the problem is spreading to other states.

One of the detained caravan illegals planned to head to Virginia. Illegal migration has inflicted a serious MS-13 gang problem on the state while tilting it further toward Democrat rule. The two go together.

Building a wall will make it almost impossible to cross the border (at least from Mexico) but unless we build a legal wall against asylum, today’s detention center inmates will soon be running the country. Physical barriers are important, but legal barriers matter even more. Most of the members of the illegal migrant caravan didn’t head for Goat Canyon, instead they began claiming political asylum.

We can use physical barriers to keep border crossers out, but until we tear the United Nations out of our legal system, we will never be able to keep our borders and our future safe from the invasion.

When the United States signed on to the convention in ’68, LBJ and his people lied to the Senate and to Americans and assured them that it wouldn’t change anything about our system. The convention however is the most damaging piece of immigration law that doesn’t carry Ted Kennedy’s name.

“Accession to the Protocol would not impinge adversely upon established practices under existing laws in the United States,” LBJ had claimed. “State laws are not superseded by the Convention or Protocol.”

He described it as a “symbolic element” in his message to the Senate.

There’s nothing symbolic about it. And until it’s gone, our borders can never be secure.

We must build a wall of concrete, of sensors, drones, agents and lights. But we must also build a wall of laws. Bad laws have been far more effective than coyotes and broken fences in the invasion.

Today, the United Nations controls our border. Tomorrow, the United States must take back the border.