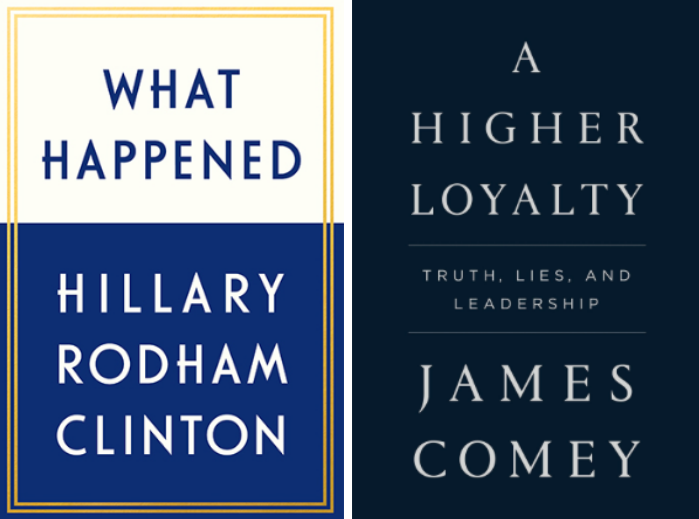 Hillary Clinton is 5’4. Former FBI boss James Comey is 6’8. But they have one important thing in common.

Both Clinton and Comey put themselves first.

But both bitter book tours are the work of selfish, spiteful and egotistical people who don’t care how much damage they do to the allies who trusted them as long as they make money and settle scores.

It’s only fitting that Comey is using the same excuse that Hillary did for his leaks of classified information. “It wasn’t classified when I sent it.” It’s also inevitable that Comey, like Clinton, takes refuge in the same sort of legalistic technicalities to justify his wrongdoing. Did he leak the documents? No, he gave them to someone else to pass on to the media. Is that leaking? No, because he was already a “private citizen.”

Meanwhile Comey goes on claiming ignorance of the origins of the Fusion GPS dossier.

“When did you learn that the DNC and Hillary Clinton campaign had funded Christopher Steele’s work?” FOX News’s Bret Baier asked Comey.

Like Obama, Comey claimed to have only found out about the dossier’s true origins from the media. After being pressed by Baier, he finally declared, “I wanted to know what I knew.”

The technical term for that is, “Plausible deniability”.

Or the most honorable and principled plausible deniability that $10 million can buy.

Comey, like Clinton, always sounds like he’s answering questions at a deposition, even when he’s at a media interview, and his replies are littered with lawyerese like, “Not to my recollection” and “my understanding”.

Spot which ‘understanding’ answers in a television interview came from Comey and Clinton.

“Well, my understanding of what happened is that the State Department had e-mails that they gave to the committee that was formed.”

“Okay, my understanding was the activity was begun, that, that Steele was hired to look into was first funded by Republicans.”

Yes, they both speak the same way.

Or as Comey put it, when asked if he’d told Obama about the origins of the Clinton-Steele dossier.

“No, not to my recollection.”

Comey’s recollections have been known to change over time. As have Hillary Clinton’s.

Mr. Comey, like Mrs. Clinton, doesn’t know anything, whether he’s testifying in the Senate or to CNN. But when a public official answers, “Not to my recollection” and “my understanding” in TV interviews, he or she is reflexively answering questions in a way that avoids legal liability even when there isn’t any.

Comey and Clinton both suffer from the same brand of legalistic paranoia of career cover-uppers. It’s why Comey circulated the Clinton draft among people like Strzok and got him to do the dirty work. It’s why Comey passed on a memo to his pal, who was also a lawyer, to be leaked to the media. (Expect that fake attorney-client relationship’s confidentiality to be honored, unlike that of Trump and his actual lawyer. But much like that of Hillary Clinton and her non-protected relationship with Cheryl Mills.)

Every decision that Comey made was done to protect his own career. He allowed Obama and Hillary allies to run their version of Watergate against Trump as long as his own fingerprints weren’t on it. Comey wanted to benefit from an election rigging without ever being accountable for it. Letting McCabe get his hands dirty would allow him to claim that he didn’t know anything about what was going on.

When McCabe’s antics threatened that state of affairs, Comey authored the Weiner letter. He didn’t believe the letter would stop Hillary from winning, but it would protect him in case she lost.

And it did. For a little while.

But Comey couldn’t keep balancing the impossible demands of Democrats to bring down Trump, with Trump’s demands to be informed of what was going on. And so Comey tried to weasel out of it by leaking materials to the media and making it clear that there would be a price to pay for firing him.

Comey wasn’t loyal to a higher duty. His higher duty was always to his career. Just like Hillary.

“A Higher Loyalty” is a shameless effort by Comey to spin his self-serving actions as honorable. But a principled and honorable man would have wanted to know where the Steele dossier came from.

“I wanted to know what I knew,” is the answer of a cynically dishonorable man. The sort of man who would kick off his comeback by posing with the Statue of Liberty after violating all that she stands for.

Honor and loyalty to Comey are just more forms of plausible deniability. Duty and principle are another version of, “My understanding” and “Not to my recollection”. To paraphrase, Walter Sobchak, “Say what you want about the Democrats, but at least it’s an ethos.” McCabe, Strzok and the rest of the gang believed in something. James Comey only ever believed in covering the bureau of his behind.

That’s why he collided with Hillary Clinton. He couldn’t commit all the way to helping her, because they were two of a kind. Hillary would sell out anyone. And so would Comey. Just ask McCabe.

What happens when an unstoppable careerist hits an immovable bureaucrat?

Comey wouldn’t put Hillary ahead of his career. And Hillary won’t put the Democrats ahead of her grievances. That’s why her people are taking potshots at Comey even though he’s helping the Dems.

Neither Comey nor Clinton have any higher loyalties. Their books are written in praise of themselves.

Egomaniacs and narcissists have no sense of proportion. Their own happiness is the greater good that the world revolves around. It takes an egomaniac to produce “A Higher Loyalty” or “What Happened”.

Both books are fueled by a grandiose conviction in the moral heroism of their authors. But that delusion is constantly being undermined by their self-serving lawyerly defenses of their actions.

And by the final fact that neither Comey nor Clinton can conceive of a good greater than themselves.

Stripped of their pretensions, “What Happened” and “A Higher Loyalty” lay out a quest by two Washington D.C. insiders for their careers and everyone they blame for losing their jobs. Comey and Clinton want us to believe that their Russian conspiracy theories somehow ennoble and justify them.

The Russian conspiracy theory has always been a self-serving effort by the Clintons and their government allies to justify a ruthless campaign against their political opponents. Its tautological politics dress up the self-serving abuses of the conspiracy theory’s inventors and promoters as patriotism. They justify any assault and abuse to defend against a threat invented by Clinton and promoted by Comey.

Honor isn’t found in how harshly you treat your political opponents, but how sternly your view yourself.

“A Higher Loyalty” and “What Happened” share a common thesis. It’s someone else’s fault.

Both of them deserve each other. America doesn’t deserve them. Or deserve what they’ve done to it.

The Bible Predicted the Opening of the U.S. Embassy in Jerusalem