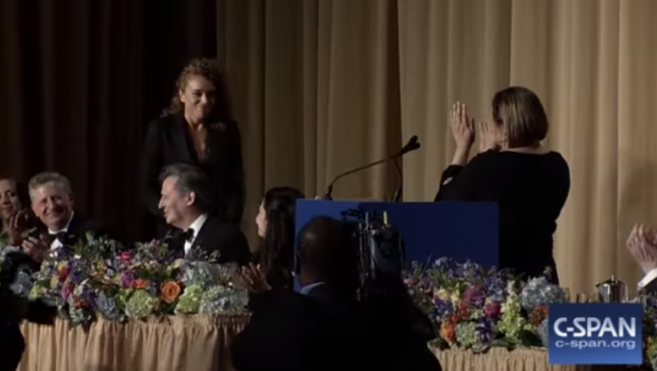 The White House Correspondents’ Association went from spending 60% of its take on scholarships in 2009 to 23% in 2015. This year, the WHCA boasts that it’s spending $134,500 on scholarships.

That’s comparable to its executive compensation.

The Correspondents’ Dinner sells tickets. Buy a ticket and you get to sit next to a celebrity while listening to another unfunny Daily Show alum yell obscenities at the president and his staffers. It’s for charity.

“The dinner is not about the president, it’s not for or against the president,” Margaret Talev, the WHCA boss, insisted on CNN. “It’s about elevating good journalism and embracing the first amendment.”

I haven’t heard this many lies in one sentence since Hillary Clinton’s last book tour.

The Dinner does much better when the president shows up. That’s why the media is fuming that Trump stood them up twice. If the President is a Dem, he merits a bootlicking. If he’s a Republican, then his daughter gets compared to a box of tampons.

The WHCD and the WHCA have the same relationship to good journalism that vampires have to sunlight.

Since Talev loves “good journalism” so much, here’s what her dinner is actually about.

That’s what you see if you watch the highlights on YouTube. But Washington D.C. insiders know that the circus at the Hilton is just the hub for parties across town with numerous special interest sponsors.

It began with Creative Artists Agency (CAA) hosting “WHCD Kickoff Cocktails”. The mega-agency had been famously at the center of Hollywood’s Harvey Weinstein #MeToo scandals and was dubbed by Rose McGowan as a “company of pimps that sent so many into the monster’s lair.”

But no need to ask tough questions when the booze is flowing. It’s all for the First Amendment.

The venus flytrap might have been more apt. Once the truth gets into CNN, it gets trapped and dies.

This is what the White House Correspondents’ Dinner is actually about and it has less to do with the First Amendment than Don Lemon posing with Playboy bunnies. The Dinner is an excuse for D.C. jornos to stumble drunkenly through parties, network, mingle and say nasty things about President Trump.

It’s a series of parties, many of them hosted by big media institutions like the Washington Post, MSNBC and CNN that are sponsored, in part or whole, by trade groups, lobbies and corporations. The violations and conflicts of interests are almost as bad as the unwanted drunken gropings in Adams Morgan bars.

How much does all this stuff cost? Millions? Tens of millions? Who’s paying for it and what are they getting in exchange from their media partners? Don’t ask. Questions like that might be journalism.

But it’s for the children, the First Amendment and the dolphins (probably).

The media-industrial complex fumed that President Trump had the temerity to skip out on this wholesome family entertainment. He wasn’t even in the audience when Michelle Wolf (unfunny Daily Show alum #11) compared his daughter to an empty box of tampons. How dare he miss out?

Imagine the way the hungry Roman lions might have felt if the Christians just hadn’t shown up.

“Historically presidents have felt that it’s important to send the signals, both to Americans and to the rest of the world, that they support this sort of quintessential part of American democracy,” the WHCA’s boss said reprovingly.

Do we really want the world to get the impression that we support the quintessential democracy of huge media corporations getting their talent very drunk while insulting the judgment of the voters? The Correspondents’ Dinner doesn’t embody the First Amendment. It’s the dumpster fire of a powerful oligarchy that decided sometime around 1962 that with enough power and lies it could run the country.

The signal the White House should be sending is to hell with it and the vomit-coated Uber it rode in on.

Who decided Michelle Wolf should be the public face of the WHCD? Wolf has a Netflix show coming up and her agency, UTA, also represents a horde of big jorno names, including Anderson Cooper, Chuck Todd, and Don Lemon. UTA also threw a pre-party titled, “Celebration of America’s Journalists”, that will celebrate its media clients and Wolf. And Wolf’s new notoriety means big bucks for UTA.

“We are seeing that the intersection between politics, entertainment, and news is stronger than ever before, and we want to be at the center of that,” Jay Sures, UTA’s co-boss, declared.

There is no journalism or news, it’s all entertainment.

According to Sures, the number one concern among his clients is that “they are regarded as ‘fake.’”

Why would anyone thinking that talking heads sitting on a high chair and reading off a teleprompter before going off to get drunk while their assistants bash Trump from their Twitter accounts are fake?

Michelle Wolf is as much of a newsperson as Don Lemon or Anderson Cooper. The only difference between the Daily Show alums and their CNN/MSNBC counterparts is that the Dailys practice goofy grins in the mirror while the CNNers try out grave expressions, but both use the same faux outraged look.

It’s not about journalism, truth or the First Amendment. The same oligarchy partying the entire weekend for the First Amendment has been doing everything it can to crush the opposition press. Its members believe that Playboy is journalism and the conservative media outlets they’re fighting to banish from Facebook and Google aren’t. And that is how the media approaches all its “reporting”.

The crooked media of a corrupt party knows its business. Smear the opposition and get feted.

Democrats exist only to be praised and Republicans only to be crushed. The Correspondents’ Dinner licked Obama’s wingtips while taking cheap shots at Trump, his staff, his family and anyone who ever met him in the last twenty years. And then its talent sleep off their hangovers and whine that Trump’s refusal to show up to be insulted by UTA’s latest moneymaking bid is an attack on the First Amendment.

The White House Correspondents’ Dinner is a corrupt institution that hardly anybody reports on because it embodies a corrupt media-industrial complex choking on its own conflicts of interest, abuses, ethical violations, sexual assaults, lies, frauds and utter lack of credibility with 90% of the country.

Or, as the media describes anything that tells those truths, an attack on the First Amendment.

Saving the First Amendment means freeing the press from the corrupt oligarchy choking it to death. The free press has been tied up and locked in the basement of a Washington D.C. and New York clubhouse whose stories are brokered by shadowy fixers and fed to them by organizations like Fusion GPS.

If you want to understand the dismal state of the free press in this country, imagine if the only news that 90% of Americans got came from the press releases and lobbyists of GE, Amazon and UTA.

That’s exactly the situation in America today. Only some of the names are different.

Freedom of the Press will not return to this country until the last girder falls from the last media-industrial corporate headquarters on the last White House Correspondents’ Dinner.

But until then you can stop by the Reuters WHCA brunch where the stars of Top Chef will serve members of the press. And then it’ll be time to push the Mueller coup against the 2016 election.

Don’t worry. It’s all for the First Amendment.

In the Fight to Preserve Our 2nd Amendment, Don’t Help the Left Defeat You