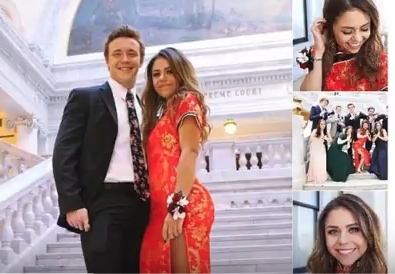 Each week it seems like the radical left finds a new subject/person to be outraged about. This week it’s a high school girl in Utah by the name of Keziah Daum. Her crime: cultural appropriation. I have to admit I had not heard this term before so I had to educate myself (I am so ashamed that I wasn’t up on the latest leftist jargon!). So here is the official definition:

“Cultural appropriation is a concept in sociology dealing with the adoption of the elements of a minority culture by members of the dominant culture. It is distinguished from equal cultural exchange due to the presence of a colonial element and imbalance of power.”

So, what did this fiend do? Why, she wore a Chinese dress to her prom!!! Monster!! Racist!! I am surprised she is allowed to walk the streets freely out there in Utah. She should be locked up in one of those mental prisons Kanye has been talking about.

** Btw, just a technical point here, but the Chinese outnumber pretty much everyone on the planet. Can we REALLY say they are a minority and qualify for cultural appropriation? Just asking…

This started innocently enough with a tweet Keziah posted with pictures of her in her prom dress. But as is often the case, it wasn’t long before someone on the left  had to act all offended and inject themselves into the situation. It started with twitter user Jeremy Lam who obviously has way too much free time on his hands (and btw it sure looks to me like he is wearing AMERICAN clothing. I am offended!):

“My culture is NOT your g**d*** prom dress. I’m proud of my culture, including the extreme barriers marginalized people within that culture have had to overcome those obstacles. For it to simply be subject to American consumerism and cater to a white audience, is parallel to colonial ideology.”

Wow. A prom dress = colonial ideology. Why do we take these people seriously???

The left is never content to just let people live their lives without claiming victim status. And I am beyond tired of hearing how they are some kind of paragon of virtue of tolerance. The radical left are the most INTOLERANT group of people on the planet. And quite frankly attacking and BULLYING (cause that’s what this is) a high school girl for honoring another culture with her prom dress is despicable.

I thought Keziah’s response was spot-on (and yes it did contain an expletive but in this case it got the point across pretty well):

“To everyone causing so much negativity: I mean no disrespect to the Chinese culture. I’m simply showing my appreciation to their culture. I’m not deleting my post because I’ve done nothing but show my love for the culture. It’s a f***ing dress. And it’s beautiful.”

She has NOTHING to apologize for and I was glad to see she had the backbone to push back on it. The discussion has continued on her twitter page and while there have been the usual comments from the left about being offended, it has been encouraging to see a great number of comments of support for Keziah. Here are some samples:

Was the theme of prom casual racism?

By constantly dismissing them by saying this wasn’t your intention, is frustrating to us. You will soon be in the real world where doing stuff like this will cause you a lot more than hate on a thread. Hope this helps shine a light.

Whoever wrote this is the one who is going to have problems in the REAL world. And was that a threat???

You look gorgeous and the dress is stunning! What a wonderful world we live in where we can share culture and dress in special design and style from across the world representing the culture of Earth and the art of humanity.

Which of course is what the left CLAIMS it is all about. It’s a lie.

Man it’s winter on twitter! Look at all these snowflakes!

Your dress is fine. It’s cyberbullying and harassment that is the problem here, not your dress.

True and it is what the left excels at.

Why are Americans acting offended at a dress when they literally dress like Leprechauns on St. Patrick’s Day? Excellent point!

I’m asian and I’m not insulted in any way. You look beautiful.

The guys are doing a V N with their hands that stands for “vape nation” which comes from a youtube channel h3h3 and the girls are doing “papa bless” from the same channel.. its a meme from youtube..

oh man syria is still in shambles and flint still doesn’t have clean water and memes from youtube are what people are choosing to be mad about.

You gotta have your priorities!

she also clearly is undereducated on this particular dress, since she wore it out of context and thinks its just a “vintage dress” but maybe thats just my opinion…

As you’re not Asian, maybe it’s best to listen to people who actually are since you’re all about “appreciating the culture”

i’m 100% chinese and i don’t find this offensive at all. people just want to cause unnecessary drama because they’re bored with their lives. the dress looks beautiful just like you.

North and South Korea just made peace and twitter is going mad over what seems to me to be a lovely young lady dressing up to go out and doing that thing humans have been doing since the dawn of time. Trading and assimilating cultures. Grow up.

It is extremely racist to say only a certain type of people can wear a certain type of clothing. The dress is amazing. This will all pass in a week when all these fake people move onto hating someone else. If you wore that dress in an Asian country they would complement it.

Now, that is true!

If we don’t share our culture with others, how can we become more diverse as a people? Wearing a Chinese dress is offensive? Does that mean that eating Chinese food is appropriation? Is listening to Chinese music considered stealing? Tribe mentality is toxic bro.

Amen! Btw, I like Chinese music so I guess I am racist too!

If you’re about to ridicule a high schooler for her clothing choices, maybe it’s time to re-evaluate your life. I’m waiting for all the actual Chinese people to say something because this entire comment section is full of LITERALLY everybody else. It doesn’t affect you.

“Nope I’m just sick and tired of cultural crap. I wish my ancestors never came to this country. I’m going back to France where I can enjoy my French fries in peace.”

Keziah is is showing tremendous courage in the face of those who wouldn’t know it if it smacked them in the face. Just like Kanye, she is pushing back and standing up against the bullying tactics of the radical left. Good for her! Maybe we’re finally reaching a turning point.

The Candace-Kanye Black Revolution Against the Left

Mark Lutchman: Martin Luther King Jr. Would Be Ashamed of the Democratic Party