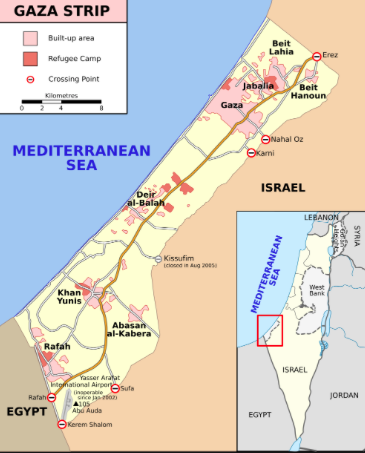 One thing that the Fatah-led Palestinian Authority shares with Hamas and Palestinian Islamic Jihad in Gaza is the dream of a world without Israel and Jews.

They both propagate a world in which the Palestinians will rule the whole of ‘Palestine’ “from the River to the Sea.” What they will do with seven million Jews goes unanswered. It’s enough that their children are taught that Israel is rightfully theirs in a fake history of victimhood that goes back to a story of dispossession dating back to 1948 when four Arab armies (Egypt, Jordan, Syria and Iraq) tried to destroy the nascent Jewish state and failed.

Arabs fled the raging battles and those that didn’t were ordered to leave by the Arab Higher Command to make way for the invading Arab forces who were determined to drive the Jews into the sea. Hence the Arab refugee problem was created by invading Arabs bent on Jewish destruction.

After their failed war, the Arab League led by Egypt set up an ‘All Palestine Government’ in Gaza headed by the notorious Haj Amin al-Husseini who had met Adolph Hitler, toured the Nazi death camps, established a pro-German Muslim fighting force in Bosnia, and was planning with the Germans the Final Solution to the Jewish Problem in the Middle East.

In Gaza, he formed a Holy War Army, basically the first jihadi militia in modern times. The Gaza Strip was controlled by Egypt following the 1948 war.

After this war, Abdullah, the Hashemite king who ruled Transjordan, that had been the greater part of the now deceased Palestine, controlled Judea & Samaria and the Old City of Jerusalem. He recognized the danger to his rule over both sides of the River Jordan from a resurgent former Mufti of Jerusalem leading a radical army of fanatical Islamists.

The Mufti’s leadership of the All Palestine Government was feared and discredited by many in the Arab League, and it was dissolved by Egyptian leader, Gabel Abdel Nasser, in 1959.

It didn’t help al-Husseini’s Islamic cause when King Abdullah was assassinated on the Temple Mount in Jerusalem while he was visiting the two mosques on July 20, 1951. He was killed by Mustafa Ashu, a militant member of al-Husseini’s Jihad al-Muqaddas.

In a strange diplomatic quirk, King Hussein, the grandson of Abdullah who had been present and witnessed the assassination of his grandfather, lifted the ban that had exiled al-Husseini and the king even received him as an honored guest in Jerusalem in 1967 after Hussein had driven out Yasser Arafat’s PLO terror group from Jordan following Arafat’s failed coup attempt to usurp power in Jordan in what became known as Black September, named after the bloody month of fighting in 1970. King Hussein had hosted Arafat’s fighters to wage terror against Israel from Jordan, but Arafat turned on the king after rightly assumed that Jordan was majority Palestine and that it was being governed by a minority Arab tribe. Arafat lost that battle. He and his remnant militants withdrew to Lebanon from where they continued their terror campaign against Israel.

Israel lost patience with Arafat in 1982 and attacked in force.

By then, Arafat and his Palestinian terrorists had destabilized Lebanon and its Maronite-led government by provoking events that led to the Lebanon Civil War. The military incursion of Israel’s army into Lebanon precipitated the exodus of Arafat and his terror gang to exile in Tunis where he remained until allowed to make his next terror base in Ramallah by the mistaken virtue of the Oslo Accords.

The Gaza Strip was under Egyptian rule until they were driven out in the Arab war against Israel of 1967. In six days Israel captured the whole of the Gaza Strip as it forced the Egyptian army back over the Suez Canal. There were an estimated 200,000 Palestinian Arabs ling in the Gaza Strip. Most were Bedouin, fishermen, and tribesmen. Israel began to build agricultural developments which attracted Arab economic migration into the Strip.

Gaza remained under Israeli military administration following the peace agreement with Egypt of 1979 until the Oslo Accords of 1994. In a phased transfer of administration, the Palestinians were allowed to control much of the Strip with Gaza City as their provincial administrative headquarters while Israel retained the Jewish community blocs and military areas.

Troubles began in 2000 when Arafat launched a serious wave of terrorism known as the Second Intifada. This included suicide combings, terrorist incursions, rockets, and bombings emanating from the Gaza Strip against Israeli military and civilians, particularly by the emerging Hamas and Palestinian jihadi groups.

In 2005, the Israeli Knesset approved Prime Minister Ariel Sharon’s plan for a total Israeli withdrawal from Gaza. Heart-wrenching scenes took place as Israeli soldiers forcibly carried Jews from their homes and bused them out of the Strip. Israel continued to control the border crossings.

Following Israel’s withdrawal, the Palestinian Authority, under the terms of the Oslo Accords, were granted the authority to administer the Gaza Strip. The Accord also granted Israel the permission to control the air and sea space of the Strip as an essential security precaution.

President George Bush allowed the Palestinian to hold parliamentary elections in 2006, despite Israeli predictions of emerging dangers from an ill-formed and volatile Palestinian political divide. The result was a victory for Hamas which took 74 of the 132 seats, a majority of 56%. When Hamas took power, it refused to accept all signed agreements between Israel and the Palestinians despite them being witnessed and approved by the United Nations, the European Union, Russia, and the United States. Hamas refused to recognize Israel’s right to exist, and to renounce violence.

In January 2007, fighting erupted between Fatah and Hamas. Deadly clashes occurred in the Gaza Strip. The fighting between Palestinian factions went on until May. I witnessed some of the result of this infighting. When I was hospitalized in Tel Aviv, I awoke from my operation to find both Fatah and Hamas injured gunmen receiving medical treatment at the hands of Israeli doctors and nurses in the same wards and departments as Israeli patients, including myself.

Over 600 Palestinians were killed by other Palestinians in this civil war. Many were tortured. Captured Fatah fighters were thrown off rooftops to their deaths by callous Hamas fighters.

While Palestinian Arabs were killing Palestinian Arabs, Hamas spokesman, Moussa Abu Marzook, blamed the fighting on Israel, but Associated Press reporter, and Gazan resident, Ibrahim Barzak, wrote, “today I have seen people shot before my eyes. I heard the screams of terrified women and children in a burning building, and I argued with gunmen who wanted to take over my home. I have seen a lot in my years as a journalist in Gaza, but this is the worst in has been.”

By June 2007, Hamas controlled all of Gaza. Mahmoud Abbas declared a state of emergency, but he has never gone to the international community to condemn Hamas. Instead, he has constantly led a government without Hamas while arresting and imprisoning high risk Hamas operatives in the West Bank. In June 2008, Egypt, Jordan, and Saudi Arabia declared the Ramallah-based Fatah-led administration as “the sole legitimate Palestinian government.”

As Hamas exerts its muscle and tried to show its political power by building a military infrastructure in the Gaza Strip, both Israel and Egypt maintain a tight vigilance on their respective borders with Gaza.

Violence against the dwindling Christian population takes place in a virulently Islamic Gaza Strip. The owner of a Christian bookshop was murdered and the Gaza City YMCA library was bombed.

Between 2008 and 2009, Hamas launched a major war against Israel, firing thousands of Qassam rockets into Israeli civilian towns and villages. Israel responded by sending their planes to hit thousands of Hamas targets.

Hamas refuses to accept that Israel is here to stay. They place their fallacious dream of destroying Israel above a better and more peaceful future for their own people.

In 2012, they again tried to inflict harm on Israelis by launching yet another rocket and terror war. They tried a third time in 2014. This time Israel’s IDF went into Gaza to destroy Hamas’s terror bases and to search out and destroy their complex of terror attack tunnels which stretched for miles under the ground and reached into Israel. Israeli officers referred to them as “the Gaza Metro.” After fifty days of this Hamas-imposed conflict, many died on both sides.

In 2014 Fatah signed a short-lived unity agreement with Hamas. But there can be no permanent peace with Hamas, not by Israel and not by Fatah.

Feeling increasingly impotent, Hamas launched “the Great March of Return” in which they, once again, used their people as cannon fodder by leading them against the perimeter fence between Gaza and Israel in what they call a march to return “all of Palestine to the people.”

They timed this latest wave of violence to coincide with Israel’s 70th Anniversary celebrations that will stretch into May.

Hamas is hoping for a prolonged and growing casualty list with which to condemn Israel internationally. They are trying desperately to find credibility as a human rights and a liberation movement, even if it means death and injury to their own people. They need the relevance of power and an influential voice, but they are a constant reminder of why the establishment of a Palestinian state is not a viable proposition.

When Hamas talks of Israel to their own people they rarely refer to our country as Israel. They prefer to call us “Zionist oppressors” or, more commonly, as “Jews.”

There is zero chance that the ugly hydra of a Fatah-Hamas Palestine will produce anything peaceful, not internally nor externally. Neither side of this political divide has a tradition or the inherited values of democracy and peace. Both are based on corruption, power, conquest, and conflict. Both are driven by anti-Semitism.

As I have frequently written, should the Palestinians have their state, and free elections take place, Hamas will win by the ballot or by the bullet.

Under this inevitability, it is best not to allow this frightening certainty to occur.

Barry Shaw is the Senior Associate for Public Diplomacy at the Israeli Institute for Strategic Studies. He is the author of “Fighting Hamas, BDS, and Anti-Semitism.”