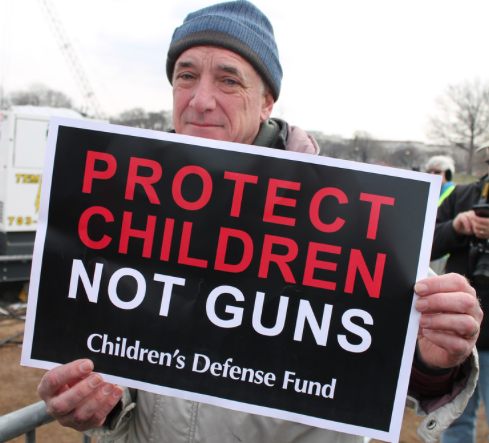 Over the past few weeks, we’ve observed a disturbing scenario unfold nationally and in West Virginia.

Teacher unions in West Virginia and the anti-gun crowd nationally use a despicable tactic notoriously employed by terrorists. They march and hide behind children, symbolically shouting, don’t dare to attack us; an attack on us is an attack upon children. Their drumbeat is always, “We’re doing this for the children!”

These tactics of using unwitting minors as instruments to further their anti-gun or any other agenda are contemptible. Indoctrinating the young and naïve into believing the talking points of tyrants is the foremost undertaking of unprincipled, leftwing fascists.

When the anti-gun vultures swoop down to feast on their favorite disaster, we must ask what malevolence these people have in their heart.  Every thinking person knows positively that banning guns in schools attract unhinged maniacs determined to kill children. Therefore, we should conclude that their narrative must be; more victims – more powerful argument for disarming Americans.

The same liberal morons that demand we leave children undefended and defenseless are the ones screaming the loudest when the obvious and inevitable occurs.

The truly amazing thing is nearly all mass killings, gang killings, and drug violence occur in neighborhoods, cities, and states controlled and administrated by Democrats. Moreover, all are areas with the strongest, most oppressive gun control laws in the nation.  Disarming people obviously cause more killings of innocent Americans because killers know in advance where the softest targets exist.

The reason liberals hate the Second Amendment is obvious; nearly everyone in their Covey is a liberal, and they can’t imagine such birdbrains owning or having access to guns. It naturally follows they think conservatives are total idiots, thus, even more dangerous.

If the teacher demonstrations and anti-constitution marches tell us anything, it’s that extortion, intimidation, and bullying works. It especially works when teacher union members accost, demean, harass, and verbally assault state delegates and senators. The professionalism of teachers engaging in this vile conduct must be questioned and their actions condemned. West Virginia teachers received pay increases at the expense of education and by sullying teacher reputations.

Schools and teachers involved in these protests over gun ownership and illegal strikes over wages are usually radicalized union comrades and members of the Marxist Democrat Party.

The Democrat Party is the biggest enemy of gun rights in our nation largely because they universally believe that American citizens have no right to self-defense or own guns. Passing anti-gun laws and nullifying the Second Amendment shows ignorance or contempt for the Bill of Rights.

Electing any Democrats to federal, state, or local offices increase the Party’s overall strength and can tip these controlling bodies to continue the fight to disarm Americans. Just one more Democrat in the House or Senate could make the difference between tyranny and liberty.

Even when a Democrat feigns support for gun rights, like Democrat Senator, Joe Manchin of West Virginia, he adds power to the anti-gun Democrat Party and lobby groups. Manchin thinks the Second Amendment is all about hunting. Manchin is worse than a wolf in sheep’s clothing; he’s a chameleon and a charlatan, able to change his appearance on issues based on the group he is regaling. He’s announced with great clarity when talking with liberals that the Second Amendment is on the table for discussion.

Placing signs at a school announcing hundreds of children are unprotected can result in nothing but temptation to a homicidal maniac. One would have to be devoid of any common sense to believe otherwise.  Would any of the lunatic-left post a sign in their yard or on their door announcing they are unprotected by guns?

Hanging on the cloud of liberal idealism makes progressives lose touch with reality. These disciples of disinformation and indoctrination are either blinded by the bright light of real solutions to violence or willing to allow higher death tolls to keep the gun-control issue alive and in the forefront of media and the leftwing establishment. Reality, even to these mental lightweights, tells them that gun control laws will not stop mass killings. Confiscation of firearms and elimination of the Second Amendment is their ultimate goals.

Daniel Greenfield: Washington D.C. is the Most Unequal City in America

Where Was The 60 Minutes Obama-Sex Interview?