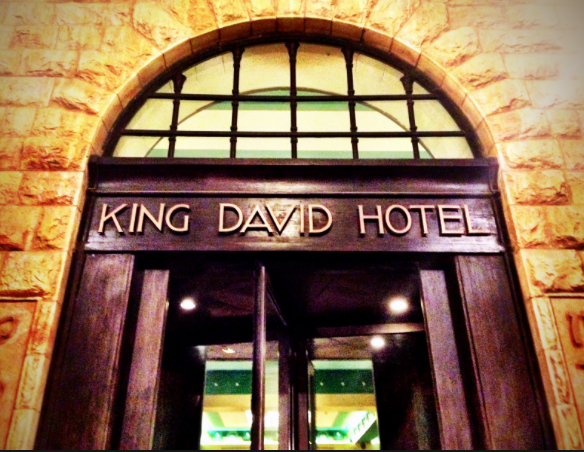 Last month, I returned to Israel for a last-minute trip that turned out to be one of the most extraordinary trips of my many extraordinary trips there. My friend Alan Clemmons was to receive an award from the Knesset’s (the Israeli parliament) Christian Allies Caucus and the World Jewish Congress (WJC); Alan had invited me to be at the presentation dinner that was to be held at the Waldorf Astoria Hotel in Jerusalem.

Before I go further, permit me to introduce you to Alan Clemmons. Alan is one of my closest friends and he represents Myrtle Beach in the South Carolina House of Representatives. I first came to know him in 2011 when I contacted him to thank him for sponsoring a resolution in support of the state of Israel that unanimously passed in both houses of the legislature. After becoming email buddies, I invited Alan to travel to Israel with me and he accepted. He stayed for two weeks: For the first week I escorted him around and for the second week, I handed him off to Earl Cox, the renowned Christian advocate for the state of Israel.

That trip proved to be life changing for Alan. His interest in the Jewish people, the state of Israel and Israeli/American relations became a significant mission for him. We returned to Israel the next year with our spouses and again the year following with 12 members of the legislature and their families. During the six years since Alan first traveled to Israel, he has been cementing relationships with members of the Israeli government and with members of the Israeli business and educational communities. He has been instrumental in forging alliances between Israeli and S.C. educational institutions, as well as Israeli and Palmetto State businesses — always mindful of his allegiance and obligation to his constituents in Myrtle Beach and to the interests of the state of South Carolina.

At the Republican Convention in 2016 which nominated Donald Trump, it was Alan Clemmons who drafted the historic plank in the party platform that declared that Jerusalem is and always will be the undivided capital of the state of Israel, strongly condemned the BDS (Boycott, Divest and Sanction) movement, affirmed Israel’s right to the land and condemned any attempt to impose a settlement or dictate borders. It was a watershed moment that caused the delegates to the convention to come to their feet in affirmation of their overwhelming support for the Israel plank in the platform.

Alan sponsored legislation in which S.C. became the first state to declare that any company that refuses to do business with a favored trading partner of the United States (including but not limited to Israel) would be prohibited from doing business with the state of S.C., including any of its towns, cities or educational institutions. Since that time, Alan Clemmons has been working with legislators from other states on similar legislation and as of this writing, 25 states have enacted anti-BDS legislation. Israeli ambassador to the U.S., Ron Dermer, has stated that at this time last year, BDS was one of the greatest dangers facing the state of Israel, but that due specifically to Alan Clemmons’ efforts, BDS is no longer a threat.

In his most recent legislative foray, Alan has sponsored legislation to require that administrators of South Carolina’s colleges and universities use the U.S. State Department’s definition of “anti-semitism” in applying and enforcing university speech codes to assure that these codes are applied uniformly and even-handedly. Unfortunately, this legislation is currently being held up in the S.C. Senate by one senator (who happens to be an ally of “Students for Justice In Palestine,” a subsidiary of the Muslim Brotherhood), but Alan Clemmons will not quit.

Now that I have introduced you to Alan Clemmons, you can perhaps understand why he was singled out by the Knesset’s Christian Allies Caucus and the WJC to receive their Lifetime Achievement Award.

The presentation dinner at the Waldorf was attended by numerous luminaries, including members of the Israeli government and the Knesset, as well as a panoply of Christians who work in support of Israel out of significant religious conviction (note, these are not missionaries who are attempting to convert Jews; these are people who support Israel primarily out of their reverence for Genesis 12:3: “I will bless those who bless [Israel] and the one who curses [Israel] I will curse”). I was seated next to a German couple, Charlotte and Jobst Bittner, whose mission in life has been to force Germans to face their own guilt for the Holocaust. They have gathered more than 400 descendants of members of the Gestapo, the SS and the Wehrmacht and turned them into full-throated supporters of Israel and the Jewish people. Extraordinary!

The dinner was keynoted by U.S. Ambassador David Friedman, who proceeded to swell Alan’s head with well-deserved praise. The whole experience was incredible and well worth the trip from Charleston, but it turned out that it was only the beginning.

On the day after the dinner, Alan texted me and asked what I would be doing that night for Shabbat (the Jewish Sabbath, sundown Friday through sundown Saturday). I responded that I was planning to spend Shabbat with my family. He then replied that was too bad, because we had been invited to have Shabbat dinner that evening at the King David Hotel with Ambassador and Mrs. David Friedman. I immediately responded that my plans had changed and that I would be there. My family understood.

Friday evening, I found myself at the King David (which is, to me, the most fabulous hotel on the face of the Earth). We went into the dining room and were ushered to a table in the geographic center of the room, joining the Friedmans and their good friends, the Maidenbaums. Ambassador Friedman then announced that we had a surprise guest, at which point Israeli ambassador to the U.S., Ron Dermer, appeared. So, there I was at table with the U.S. ambassador to Israel and the Israeli Ambassador to the United States. It could have been a “homina-homina” moment but I was able to grab hold of myself because this was a once-in-a-lifetime opportunity. And it was! The conversation was extraordinary.

One example: The ambassador recounted that two nights before he had received a phone call. The voice at the other end of the line said:

“Mr. Ambassador, this is the White House Situation Room. Please hold for the President;”

President Trump: [sounding surprised] “Are you in Jerusalem?”

Ambassador Friedman: “YOU SENT ME HERE!!!”

During dinner, I brought up the moving of the Embassy from Tel Aviv to Jerusalem and asked if it would happen in 2019, as had been stated by the State Department. Ambassador Friedman replied that it would be before then, to which I responded the obvious: “that means this year, 2018.” The ambassador then reminded us that Donald Trump’s motto has always been: “early and under budget.” While I mused that “December is not so far away,” Alan Clemmons interjected: “Wouldn’t it be wonderful if it were to open on the very day this coming May that is the 70th anniversary of the establishment of the state of Israel?” Ambassador Friedman just smiled. Several days later it was announced that the U.S. would open its Embassy in Jerusalem coincident with the 70th anniversary of the state of Israel!

It was that kind of evening.

And the surprises kept coming. When I had made my last minute cancellation of Shabbat dinner with my cousins so as to dine with Ambassador Friedman, we had agreed that I would visit them after Shabbat. So on Saturday evening, I drove from Jerusalem to my cousins’ home in Modi’in, bringing Alan as a surprise for them. Throughout the years, Alan has become an honorary member of both my family and my wife’s. Since Alan has become a major star in Israel, they were totally thrilled to have the conquering hero under their roof. We had a lovely evening with my family and then started driving back to Jerusalem. About 15 minutes out, Alan received a phone call. It seems that we were being invited to a party in Arnona (a suburb of Jerusalem). We found the address of what turned out to be a walled property with a spectacular view of the city and parked the car. (It turned out that the home belonged to the chairman of the company that owns and operates most (if not all) of the duty free shops at airports throughout the world.)

Once inside, we were greeted by Ambassador and Mrs. Friedman, who told us that the party was being held in honor of a large group of American professional football players who were visiting Israel. I must confess that what I know about football (professional or otherwise) you could put in your right eye and have room left over. All I can tell you is that I was surrounded by physically huge people whom I knew I should recognize, but unfortunately had no idea who they were. I found myself in an immense sea of football jerseys (or was it a sea of immense football jerseys?). I do remember seeing some from my “home” teams: the Carolina Panthers and the New York Giants.

By the time we finally got back to Jerusalem in the wee hours, I was thoroughly exhausted. The next day, I drove Alan to visit with my wife’s family in Tel Aviv and then to the airport for his return to his real life of being just another state legislator. I remained in Israel for a few more days, decompressing and visiting with various members of my family.

I am still trying to absorb all that happened on this particular trip. But if I came away with only one major lesson it would be: traveling with a VIP really has its perks! You just never know what will happen!

To quote the immortal Rosanne Roseannadanna: “It just goes to show you. Its always something.”

Stuart Kaufman’s article was originally published in the Charleston Mercury.

Anti-Semitism and the Jeremy Corbyns of This World

Daniel Greenfield: The Military Can Secure the Border and Build the Wall