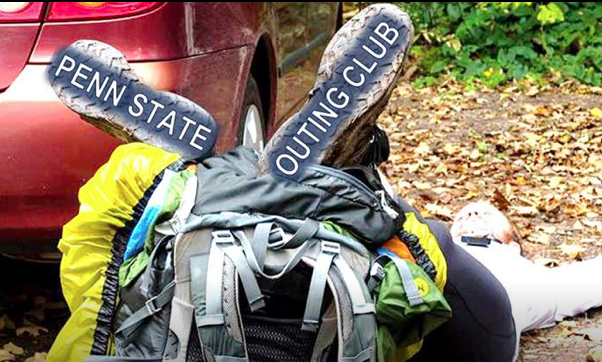 Over the past few decades many have lamented the increasingly litigious nature of our society. Along with that sad trend, we have also become a very “risk averse” society on many levels.

Many are afraid to invest their savings in anything other than a local bank for fear that either the stock market will crash again, or the government will nationalize their savings to stave off the massive $20+ Trillion doomsday bomb known as our national debt.

Others want guarantees for every activity that will absolve them of personal responsibility for any injury to any body including themselves even if they are the ones responsible for the participating in and/or being injured because of that activity. It – the accident, injury, insult, or other calamity – must be someone else’s fault. Well, the lawyers love it anyway.

But it has finally reached a zenith today with the announcement that Penn State has virtually ended a 98-year-old tradition on its campus with the “Outing Club” being prevented from “outing.” Outing being the activity of holding “outings” involving ordinary activities such as fishing, hiking, camping, kayaking, canoeing and trail building. What’s wrong with these wholesome activities that would cause Penn State to curtail or eliminate such a healthy club activity?

The Outing Club has been a fixture for nearly a century and, believe it or not, was not involved in any of the usual scandals that seem to pop up among the many Greek organizations on campus and elsewhere across the country. No, the Outing Club was the victim of what has become cliché in today’s communities. Risk Management. It would be better called “Risk Elimination.”

Yes, after a two-month review, the Penn State Office of Student Affairs and Risk Management determined the activities listed above were too risky. In their announcement, Penn State stated,

“This is a result of an assessment of risk management by the university that determined that the types of activities in which [Penn State Outing Club] engages are above the university’s threshold of acceptable risk for recognized student organizations.”

The icing on this ridiculous cake is the reasoning that went into the decision-making process. You see, according to Penn State, the activities involved going off-campus to areas where cell phone service was not available. This put the activities in a high-risk classification – too high to permit them to take place.

Lately, we often wonder why so many of our youth are so easily triggered into a panic, or why they become upset by the slightest irregularity in their lives. Perhaps the problem might be rooted in the fact that many of today’s college students have been so sheltered in their upbringing that they have never been exposed to any appreciable level of risk. As a result, kids today are often incapable of dealing with anxiety or normal everyday dangers that those of us born before 1960 take in stride and shrug off as just another skinned knee, sprained ankle, or broken arm.

Gosh, when I grew up, having a cast on your arm made you the center of attention for a couple days as you asked for autographs on your cast. After that, you were just another kid that climbed too high or jumped too far. No big deal. Learning to fish, ski, or canoe were normal rites of passage – particularly for boys but not excluding girls.

If we are to survive as a civilization, something needs to change. As we are headed now, it is highly likely that very few people would survive more than a week if anything happened to the local supermarket, or clothing store. Hasn’t anyone taken note of the threats to our power grid that are talked about frequently in the news?

It is also very likely that any of the former members of the Outing Club who made it to its outings to experience nature, the outdoors, and some of the most important skills needed to survive on one’s own will be far better off than the sheltered and coddled alumni of Penn State from this point forward.

Regardless of whether one ever put their outdoor activities and skills to use in an actual disaster, I believe that parents do their children a lot of harm by failing to prepare them for life’s disappointments, bruises, and setbacks. Putting them at risk – within reason – teaches them that life is never just a bowl of cherries all the time. It better prepares them for life’s disappointments and set-backs.

What is most disappointing about this little story is that parents heap tons of money on such august institutions of higher education as Penn State with the idea that their kids are being prepared for real life. The Outing Club appeared to be a great way to experience risk while enjoying the beauty of nature. Always keeping them within reach of a cellphone makes them so dependent on that electronic umbilical cord that they are never able to fly with eagles. Instead they are tethered to the risk-free world where all is safe. That is terribly sad, indeed.

Homelessness Across California: A State Of Emergency

Tossing Gasoline on the Fire? Education Subsidies Are Doing Just That