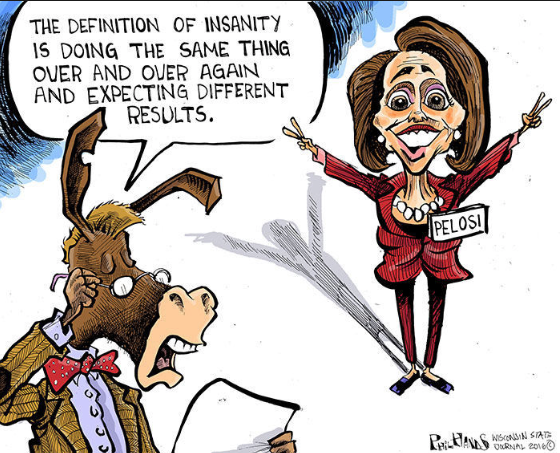 Nancy Pelosi has shown her true colors with her latest statement that if the Democrats regain the majority in the U.S. House of Representatives, she as the Speaker will seek to roll back the Trump Administration tax relief plan and raise our taxes.
Once again, the Democrats are displaying to the average citizen that they are the party of tax and spend.
According to the Democrats, all that we have received from the Republicans are “crumbs” anyway.
So that leads one to ask the question, why would they want to take those “crumbs” away from us, and then shackle us with the burden of more taxes, and wasteful spending?
Why would the Democrats not want the American citizen to have more of their hard earned money in their own pockets to spend as they see fit?
Why is it that they don’t want to give the tax cuts, which were passed by Congress and signed by the President, a chance to work?  After all, it’s a proven fact that tax cuts work, and we are beginning to see rapid results because of the Presidents plan.
We are seeing companies give wage increases, and bonuses, reopen facilities, and Black leaders are praising the effect that the Trump Administration’s policies are having on the employment rate.
Many of us have also received tax refunds.
The message that the  Democrats are sending to us,  is that they want to “Make America Fail.”
Our President ran on the motto to that he would “Make America Great Again.”
American’s don’t want failure, we want to restore and rebuild our economy, and our position in the world.  We want jobs and a stable future.   American’s want to prosper, not have more money taken out of their hard earned paychecks to be spent on wastesful government projects.
The message of Representative Pelosi is clear.  Our message must be equally as clear this November.
Our message must be heard at the ballot box.  We must vote for America’s future.
We must send Rep. Pelosi and her colleges home, and replace them with those who care about our future, and the prosperity of America.
Vote to keep your “crumbs” and American prosperity, not for Tax increases and more Democrat lies.
Share
Facebook Twitter Pinterest Reddit Share via Email Print

Barry Shaw: Why Jeremy Corbyn is a Danger to Israel