One California congressional candidate is calling on President Donald Trump to arrest California’s Governor for treason.

Mr. Donnelly believes Brown is intentionally setting up a constitutional crisis along the border, violating his oath to uphold the U.S. Constitution, and using the power of his office and the resources of California taxpayers to entice dangerous criminal aliens to take sanctuary in the state.  Donnelly believes Governor Brown is intentionally creating a tension between the powers of the state and the enumerated duties of the federal government to protect the nation from invasion.  “People are on the verge of a political revolt and we are hoping to keep it peaceful. The last time we had a state behaving in this manner we went to war.”

Indeed a recent poll found a majority of Californians want deportation of illegal immigrants to increase.

For Donnelly, immigration is his campaign cornerstone.

Donnelly’s cornerstone campaign issue is immigration.  He recognizes that the Constitution is the supreme law of the land. He supports President Trump’s exercise of federal power to protect the country from invasion as a one of enumerated duties under the Constitution (Art. 4 Sec. 4).

When you don’t protect national sovereignty, you dilute vote of the citizens.  We are watching Democrats and Establishment Republicans let unchecked masses invade this country.  That hurts the people in the 8th District, in California and across the United States because elections are often determined by very small margins.

Donnelly is running to unseat incumbent Republican Congressman Paul Crook, elected in 2012, who has been silent on the matter of immigration and Trump’s use of the national guard. Donnelly calls Crook a “Never Trumper” who talks conservative talk but actually walks the liberal walk, joining with California Democrats to use state funds to fund sex change operations and amnesty for illegal aliens.  Donnelly offers voters in the 8th District a more conservative, pro-Trump, choice.

Readers can view Mr. Donnelly’s platform on his website: Donnelly4congress.com

To illustrate the strength of his beliefs, Donnelly, who is also a former California MinuteMan Leader, has called California’s Minutemen to secure the border on May 5 9am to May 6.  “They will observe, report, and thereby extend the reach of the border patrol. Our goal is to give back up and to draw attention to the fact that California is under assault as the the most likely place to cross into the U.S. California is the backdoor for illegal immigration.”

Mr. Donnelly’s statement is reproduced below:

TWIN PEAKS, San Bernardino County, CA  —  Since California’s lawless governor Jerry Brown has chosen today to side with criminal illegal aliens and ignore Pres​ident Trump’s call to ​have​ the National Guard ​secure​ the border—putting our communities at risk through no fault of our own ​– it falls ​to we the people of this great state to resist this tyranny.

Brown’s rejection of the President’s order to have the guard aid in securing the border went unheeded by Jerry “Moonbeam” Brown, who added insult to injury by stating that ​he would deploy the guard ​to be nothing more than ‘gas delivery’ boys and paper pushers.

As a former California State Assemblyman, and the leader of the Minuteman in the state of California, I call on the President of the United States to arrest Governor Jerry Brown for flouting Federal law and aiding and abetting illegal aliens in this state.

Every elected official—and Gov. Jerry Brown is no exception—has sworn an oath to uphold the Constitution of the United States, the laws of the state and nation, to defend it against all enemies foreign and domestic.

By violating his oath, and using the power of his office and the resources of the taxpayers to entice dangerous criminal aliens to take sanctuary in our communities, Gov. Jerry Brown has become an enemy of the good people of this great state.

Since Gov. Jerry Brown today has made it clear that he will not heed the call of the ​President of ​the United States to send the National Guard to effectively secure​ the US-México border, I’m calling all Minutemen and Patriot group members in good standing and any and all good citizens of this state to come to the aid of their country, and do the job that feckless Gov. Jerry Brown refuses to do.

See the text of Donnelly’s Notice to all Minutemen Below:

All Minutemen and Patriot Group Members in good standing, are invited to come and meet me in the town of Boulevard, CA at 9AM on May 5th (out at the Red Rocks), where 12 years ago in that place we started building the wall in protest of the Federal Gov’t’s failure to act.

This will be a 24-hour Muster, with the original standard operating procedure still in effect.

The purpose of this Muster is two-fold:

1) Aid our men and women in the Border Patrol, who are outnumbered to secure the border for as far and as long as our manpower will provide.

2) Send a message to California’s lawless Governor Jerry “Moonbeam” Brown that even though he refuses to deploy the National Guard that there are still plenty of Patriots left in California who are willing to answer the call of their country and deploy at a moment’s notice in their place.

I hereby challenge Gov. Jerry Brown to try and stop us.  I doubt that Brown would risk his own freedom by coming anywhere near the likes of true patriots who would very likely effect a citizen’s arrest on him for violating his Constitutional oath of office and aiding and abetting criminal illegal aliens in violation of Federal Law.

Let it be known to the Cartels and the criminals who wish to penetrate our border, that from 9AM Saturday, May 5th to 9AM Sunday, May 6th, the California-Mexico border will be secure, in as far as it can be with the aid of the duly sworn Border Patrol agents and the Minutemen of 2018, who show up at the rally point on that day.

*It should be noted that California’s gun laws have changed since our first muster in 2005, and that all Minutemen should be aware and on notice that the tyrants currently in control of California would sooner arrest an American citizen found to be afoul of California’s insane gun laws than an illegal alien rapist or murderer.

If you haven’t checked out and liked our Facebook page, please go here and do so.

And if you’re as concerned about educating young Americans about good guys with guns, go here to order this new pro-gun children’s book honoring those everyday heroes who carry guns to defend America all around the world. 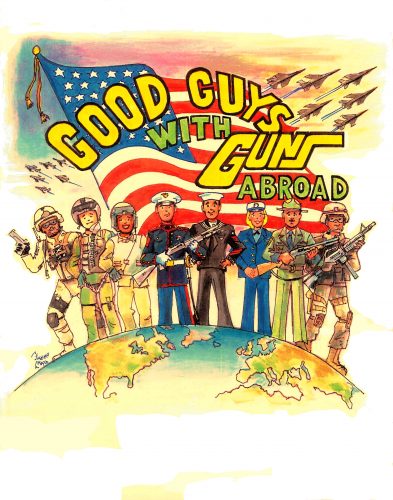 #NeverTrump: "Principles? We Don't Have No Stinking Principles..."