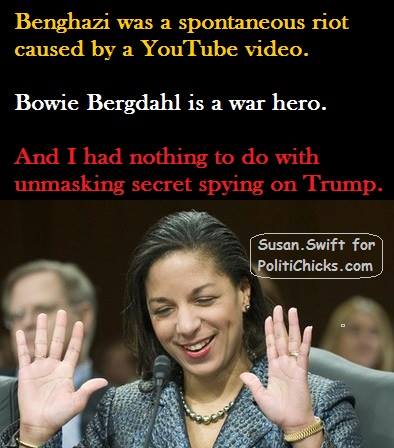 March 28, 2018: Susan Rice, who blatantly lied to the world by blaming the deaths of four Americans in Benghazi on an obscure YouTube video, has been appointed to the Board of Directors for the streaming service Netflix.

Netflix CEO Reed Hastings gushed to the world media that he was “delighted to welcome” former President Obama’s National Security Advisor to the board of directors. Hastings further stated that “For decades, she has tackled difficult, complex global issues with intelligence, integrity and insight and we look forward to benefiting from her experience and wisdom.”

Apparently, Ms. Rice stated she was “thrilled” with her new position.

As the Uncle of Benghazi murder victim, Sean Smith, I respond to Mr. Hasting’s flowery and snowflake praise of Susan Rice with disgust and anger. That anger is backed with a well researched knowledge of what a political hack Susan Rice is.

Regarding Ms. Rice, the most laughable term in Mr. Hasting’s words of praise is “ integrity.”

Let us consider the integrity of Susan Rice by looking back to September 16, 2012. It is five days after the first wave of the Benghazi attack(s) that killed American Ambassador Chris Stevens and my nephew Sean. Always remember that the Benghazi attacks occurred in two waves. The first wave killed Ambassador Stevens and Smith Smith in the evening hours of September 11, 2012 at the Diplomatic Outpost in Benghazi, Libya. The second wave occurred in the early morning hours of September 12, 2012 at the CIA Annex minutes away from the outpost. Equally tragic, the second wave lead to the deaths of CIA Contractors, Glen Doherty and Tyrone Woods.

So here it is Sunday, September 16, 2012, U.N. Ambassador Susan Rice is appearing as a guest on various Sunday afternoon news programs. Hitting the news circuit before there is even a formal investigation by federal agencies such as the FBI. In fact, at the time of Ms. Rice’s appearances, the FBI was not even on the ground in Benghazi. In her television appearances, Susan Rice exuded neither real human warmth nor expressed any real sympathy for the Benghazi murder victims. She had her orders, damage control.

To my discerning eyes, these appearances had an almost rehearsed quality about them. Scripted, but not polished. They included appearances by Rice in such programs as the CBS News program “ Face the Nation,” and the ABC News program “This Week.”

Susan Rice did not deny, in essence, that Benghazi was a terrorist attack. However, her statements about the actual cause for the attacks would have been laughable had it not been for the deaths of four Americans.

Her appearance on ABC’s “This Week” was reflective of her general statements about Benghazi for the September 16, 2012 news cycle.

Regarding questions posed to her about Benghazi by the “This Week” Host, Jake Tapper, U.S. Ambassador to the United Nations, Susan Rice, stated the following dribble:

“But our current best assessment, based on the information that we have at present, is in fact what this began as was a spontaneous, not a premeditated, ah-response to what had transpired in Cairo. In Cairo, as you know, a few hours earlier there was a violent protest that was undertaken in reaction to this very offensive video that was disseminated.

We believe that, that folks in Benghazi, a small number of people came to the Embassy to, or to the Consulate rather, ah-to, to replicate this sort of challenge that was posed in Cairo. And as that unfolded, it seems to have been hijacked, let us say, by some individual clusters of extremists who came with heavier weapons. Weapons, that as you know, in the wake of the revolution in Libya are quite common.”

So on September 16, 2012, on five Sunday Talk Shows, Susan Rice lied to the American people. She fell on a metaphoric sword for President Barack Obama’s 2012 re-election. Ultimately, in July 2013, she was rewarded for her loyalty by President Obama when she was appointed to be his National Security Advisor. Ms. Rice has been a loyal soldier in the Obama in the Obama “army,” even as she has demonstrated no real distinction in her service nor any distinction in her character.

How did Susan Rice lie about Benghazi? We should examine that question on both a visceral and a historical level.

Viscerally, as I watched Rice in her various interviews, I felt that Susan Rice was nervously reading from a hastily prepared script. My wife and I were incredulous. I remember saying to Sharon, “Did she really blame a video for a terrorist attack that killed a member of our family?” In actual fact, Sean Smith’s Mother Pat and other Benghazi victim family members were advised, by members of the Obama Administration (including Susan Rice), that the administration would “get the man who made the video.” This occurred at the casket ceremony for their loved ones. Truly amazing how ghoulish a public official can get when they are trying to hide their lies.

Correctly, to paraphrase Obama’s 2012 campaign rhetoric, Al-Qaeda was indeed on the run in September 2012 and one of the places they were “running” was in the streets of Benghazi, Libya

In the weeks that followed, Hillary Clinton repeated the same blame the video litany promoted by Susan Rice. President Obama continued this patently ridiculous ruse when he spoke before the U.N. on September 25, 2012.

Let us state, categorically, that the video in question had not a thing to do with inspiring the 2012 Benghazi attack. Nakoula Basseley Nakoula’s short film, “The Innocence of Muslims,” was a 14 minute film on the life of the Prophet Muhammad. Allegedly, Anti-Islamic content had been added in post-production. It was dubbed in Arabic and uploaded in September 2012. It was perceived as a denigration of Muhammad and promoted by the Obama Administration as a root cause of the Cairo protests and ultimately, Benghazi. Nakoula was persecuted unfairly by the Obama Administration.

In fact, this film was not even a blip on the screen of Ambassador Steven’s television.

It is ironic, when a lie is used to hide further evil. But even the devil tells the truth sometimes, right? Remember when Susan Rice, in her interview with Jake Tapper, stated that “Weapons, that as you know, in the wake of revolution in Libya are quite common?”

Well, she was revealing the truth while obscuring the tenets of that truth.

Benghazi, in a nutshell happened as follows: In 2010, President Obama decided that it would be prudent to replace quasi-secular, Northern African leaders like Muammar Gaddafi with members of the Muslim Brotherhood. Well, a member of a family appreciates what is familiar, don’t you agree?

Gaddafi was panicking the American and European financial markets by expressing his desire to move Libya, Tunisia and Egypt towards a gold standard in their currency structure. Gaddafi wanted to trade Libyan oil by way of the Libyan Gold Dinar, a single African currency made from gold.

In October 2011, Gaddafi was murdered by Libyan extremists, many of whom were members of

Al-Qaeda. They were armed with 400 tons of American weapons. These weapons became the “common weapons” described by Rice in her September 16, 2012 interview. On September 11/12, 2012 the Benghazi attack happened, killing four brave Americans.

What happened in Benghazi was a well co-ordinated, well planned paramilitary attack. It was not a random group of protestors or extremists.

History has revealed that Hillary Clinton suspected Al-Qaeda as being the main suspect behind the Benghazi attack the evening of September 11, 2012. That same evening staff members, including hack writer and Presidential Advisor Ben Rhodes, started to draft the talking points used by Susan Rice on her “video talk show” tour.

About a year and five months after the Benghazi attack, on April 2, 2012, I was interviewed by Fox’s America’s Newsroom Host, Bill Hemmer. In the course of the interview, to the head spinning amazement of Hemmer, I called Susan Rice a “tax payer paid liar.”

I still stand by that statement. Now Ms. Rice is working for Netflix. I am glad that we canceled our Netflix subscription over a month ago. There are so many more options for entertainment out there than you would think. As long as Susan Rice is working for them, I will never re-subscribe to Netflix.

Considering Susan Rice’s possible involvement in the unmasking of the Trump transition team perhaps an imprisonment term is a more appropriate transition than a promotion? Considering the dereliction of duty and constitutional malpractice of the Obama Administration, perhaps she should have some company. The blanket excuse, as stated repeatedly by the Obama Administration, is that their accusers are being “racist” or “sexist” with their accusations. Only the blatantly stupid or the traditional Democrat could excuse President Obama and his administration for their crimes. Their statements about racism and sexism are but an empty bottle, drunk dry.

There is talk of former President Obama developing some programs for Netflix. Might I suggest that he replace Actor Kevin Spacey in the Netflix original series, “House of Cards?” It might be typecasting, but at least the show will develop some real authenticity.

Where Was The 60 Minutes Obama-Sex Interview?

Daniel Greenfield: The Hypocrite is Baaaaack