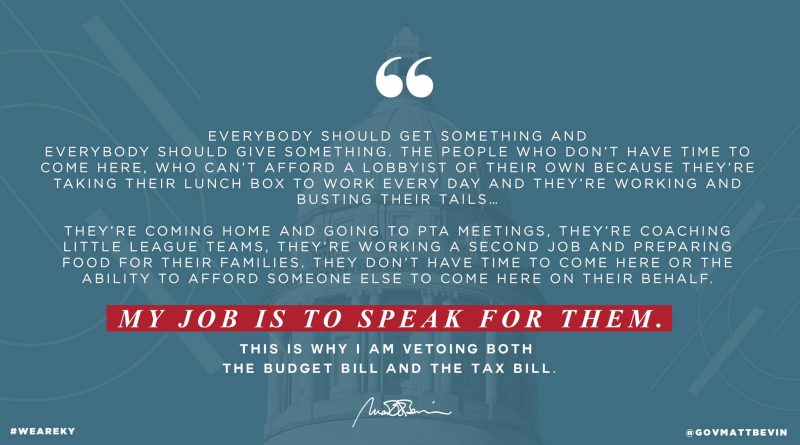 Kentucky Governor Matt Bevin is one leader who is willing to take on the massive pension crisis in his state. This is significant as unfunded liabilities of state pensions topped $6 trillion last year, an increase of $433 billion since 2016.

Kentucky has the worst unfunded pension system in America. However, this is also a huge issue nationwide as the cost of unfunded pensions totals an average of $18,675 per person in the United States.

Therefore, Governor Bevin and other legislative leaders earlier announced a plan to save and overhaul Kentucky’s embattled pension system. The governor has argued that one issue with the current unfunded pension program is that it affects the credit rating of the state of Kentucky.  As he explained, “Our state has been downgraded time and time again because of unfunded pension liability.”

He has argued that it makes Kentucky a state less likely for big business to want to come to because of the increased risk. He has also noted, “By law, these liabilities must be paid and to pay them comes at the expense of everything else people care about; you want schools, you want safe living environments, you want law enforcement, and you want roads and bridges to be maintained as we would expect them to be. The cost of doing all of that comes from the same pool of assets that are required to fund this pension.”

This basically means that the burden will likely end up falling on the hard-working taxpayer.

Governor Bevin’s original budget proposal is based on a thirty-year plan to fix the pension problem. After all, the crisis was created over decades of ‘kicking the can down the road’. He believes he is at the front edge of solving the problem and Kentucky will become a model for other states to follow.

According to his originally proposed plan, the vast majority of people who are already in the existing pension plan would be able to continue forward without any significant changes. Minimal changes would mostly occur for new employees. However, his plan also includes a defined contribution plan, a 401k, and a much more generous match than what exists in most private sector plans.

The budget the governor communicated earlier in the year was based on the assumption that the state would create a pension fix and aggressively eliminate debt. Included were money-saving cuts to 70 different non-critical programs.

However, the General Assembly, pressured by a loud minority, wrote a budget bill that chose to restore much of the previous spending and proposed nearly $600 million more in spending than was recommended by the Bevin administration. The result was a tax and spend budget that was unbalanced by at least $50 million.

The governor has also repeatedly called for true tax reform. Instead, the tax bill he received from the General Assembly placed an increased tax burden on the hard-working citizens of Kentucky. Therefore, on Monday, he vetoed both the budget and tax bills, arguing that they failed to significantly reduce the pension debt while increasing the state’s overall spending.

Governor Bevin stated after the veto on Monday:

“The state legislature passed a pension bill that doesn’t even come close to solving the problem… The pension bill took a step in the right direction to stop further digging but did virtually nothing to fill in the hole of debt that had already been dug. It failed to decrease our unfunded liabilities—rejecting reasonable changes that even the Kentucky Education Association (KEA) and the Teachers Retirement System themselves admitted were legal and would have lowered the pension liability. “

He also released the following statement on social media:

“Everybody should get something and everybody should give something. The people who don’t have time to come here, who can’t afford a lobbyist of their own because they’re taking their lunch box to work every day and they’re working and busting their tails…they’re coming home and going to PTA meetings, they’re coaching little league teams, they’re working a second job and preparing food for their families. They don’t have the time to come here or the ability to afford someone else to come here on their behalf. My job is to speak for them. This is why I am vetoing both the budget bill and the tax bill.”

Much attention has certainly been paid to Kentucky’s pension reform bill.

There are several groups that aren’t very happy with the idea of any pension reform at all.  In fact, thousands of teachers from across Kentucky met on the state capitol in protest of pension reform and cuts to education.

Take Back Kentucky (TBKY) supports the governor’s decision to veto the two bills written by the General Assembly. The group released the following statement:

“Take Back Kentucky (TBKY) applauds Governor Matt Bevin veto of the two year state budget and tax reform/increase bills. We did support the flat income tax decrease to 5%, but incomes $8,000 and under would see an increase. Our goal is to transfer from an income to sales tax, but not on automotive repair. Unfortunately, the state budget and tax reform would leave at least a 50 million dollar deficit/debt this next year. We also oppose the six million dollar plus increase in the Kentucky State Budget without a rainy day fund. Bottom line we comprehensive tax reform and the Kentucky General Assembly came up short.”

The reality is that Kentucky is in dire straights as its $60 billion pension liability hurts every Kentuckian. Governor Bevin has been working to resolve the financial crisis, which has been snowballing out of control for many years. While the process has not been easy, it does not take away from the fact that difficult decisions still need to be made.

All eyes are on Kentucky as many other states seek a pension reform model to follow.

Daniel Greenfield: March For Our Lives Isn't a Youth Movement