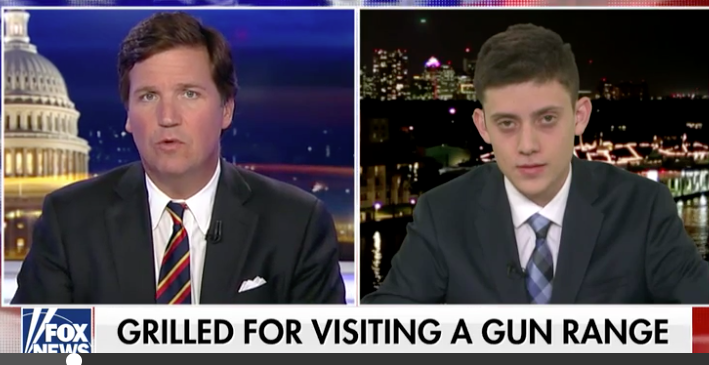 Kyle Kashuv has become the 2nd Amendment hero of the Parkland School following the tragic and preventable shooting by an angry ex-student who shall remain nameless herein.

While many of his schoolmates jumped on the leftist bandwagon of gun-haters like David Hogg, Kyle took a far more rational and fact-based approach to the issue of responsibility for the illegal and violent use of firearms by people who had already demonstrated irresponsibility in other aspects of their existence. His position could be summed up nicely by simply stating, “Guns are not the problem, people are.

That position has caused Kyle to experience the sort of vitriol that conservatives are experiencing with disturbingly frequent regularity when ever we tell the truth publicly or in the presence of a Democrat or other form of socialist gun-control advocates. It began after the first time he spoke publicly in support of the 2nd Amendment. It has continued as he has persisted. My hat’s off to him. He is a young man of principle who will not be silenced easily. That’s not to say those in power won’t try like the devil to silence him.

His most recent experience has now escalated to the point where school officials and police have taken it upon themselves to intimidate and interrogate Kyle regarding a series of completely reasonable and clearly unthreatening Tweets he posted in the past few days. Among them were statements of support for the 2nd Amendment, expressions of personal enjoyment with the experience of going to a gun range with his Dad, compliments toward his instructor who introduced him to shooting – it was his first time to even touch a firearm – and how well he enjoyed learning about safe use of a firearm (which happened to be a modern sporting rifle (AKA – an AR-15-style rifle).

Kyle also posted some pictures and videos of his activities at the range with evidence within those videos that he was under supervision while participating. The backlash was immediate among some of his schoolmates at Marjory Stoneman Douglas High School, but the worst was yet to come.

By the third period of school on Monday, he was given a note directing him to report to the Security Office at the school. When he arrived, he was interrogated at length by an armed school resource officer while another sat directly behind him (as an additional intimidation factor, most likely, or out of an irrational fear that he might leave his seat and become violent) while he was questioned. They are said to have berated his Tweets, and questioned him intensely about who he was with at the range, whose gun it was, etc. He was also refused the opportunity to record the “interview.” Finally, a Broward County Sheriff’s Deputy entered the room and joined in the questioning until Kyle was thoroughly frightened and pointed out that they referred to him as “the Second Amendment kid.” He also described the questioning as very aggressive. According to Fox News, Kashuv said that one of the officers told him, “Kyle, you have such good grades, why would you do this?”

Is this what America has come to? Is it now worthy of intimidation when a law-abiding citizen participates in a completely lawful recreational activity? It seems particularly grievous that they would spend time grilling an innocent kid like they did when repeated reports were made concerning the Parkland shooter and all of them were ignored. There is something profoundly wrong with this picture. Personally, I doubt much will change, in Broward County particularly, until the name of the sheriff changes and some of the school administration changes as well. This is a typical example of what happens when leftists are given control of government. Power goes right to their heads in pursuit of control.

My simple advice to Kyle – stand strong knowing that he is doing the right thing in supporting our constitutional rights. You are not alone. Tweet him some support @KyleKashuv. He deserves our support.