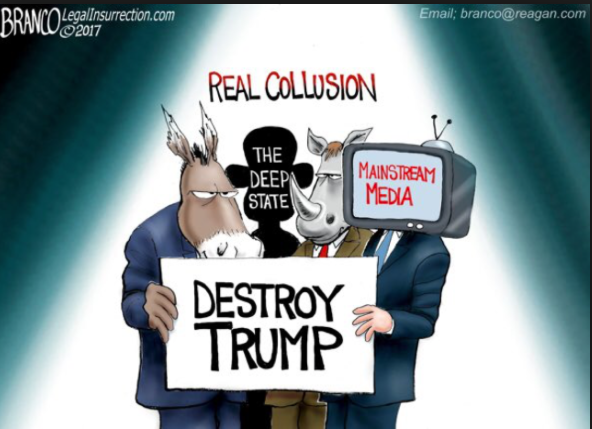 The media took a brief break from its campaign against the Sinclair Media Group to go after the National Enquirer. The two don’t have anything in common except the perception of being pro-Trump.

In the good old days, going after rival media outlets meant writing nasty things about them. But these days the media doesn’t write nasty things for the sake of writing them. It writes nasty things to get someone fired, investigated or imprisoned. And that’s what its Sinclair and Enquirer stories are about.

CNN, the Washington Post and the New York Times had wasted barrels of ink and pixels, to warn that Trump’s criticism of their media outlets represented a grave threat to the First Amendment.

And what better way to protect the First Amendment than by destroying it?

In its story about the FBI raid on Trump’s lawyer, the Times managed to suggest that the Enquirer’s support for the President of the United States might strip it of its First Amendment protection.

The Times tells its readers that the “federal inquiry” poses “thorny questions about A.M.I.’s First Amendment protections, and whether its record in supporting Mr. Trump somehow opens the door to scrutiny usually reserved for political organizations.”

That’s a thorny question alright. And there’s plenty more thorns where that one came from.

In ’08, the New York Times published an op-ed by Obama, but rejected McCain’s response. It just published an editorial titled, “Watch Out, Ted Cruz. Beto is Coming” which appears to have no purpose other than to help Beto O’Rourke raise money from New York Times readers.

The Times has a sharp thorn. So sharp it could punch a hole in it and the entire mainstream media.

“In one instance, The Enquirer bought but did not publish a story about an alleged extramarital relationship years earlier with the presidential candidate,” the Times sniffs. It’s not unprecedented for a paper to have damaging material about a politician without publishing it. Just ask the Los Angeles Times about the vault they’re keeping Obama’s Khalidi tape in. Or ask the Washington Post about its embargo of the photo of Obama posing with Nation of Islam hate group leader Louis Farrakhan at a CBC event.

Try and suggest that behavior like that should strip them of their First Amendment rights and a howling mob of pudgy pundits would descend on the green rooms of CNN and MSNBC like hornets out of hell.

On the Sinclair front, Bernie Sanders, Elizabeth Warren, Cory Booker and eight other Senate Democrats sent a letter to the FCC demanding that it take away its licenses because Sinclair condemned media bias.

As “strong defenders of the First Amendment”, Bernie, Liz and Cory want to silence Sinclair because its anchors warned about “the dangers of ‘one-sided news stories plaguing our country.'” And what better way to disprove such nonsense than by using government power to silence the news on the other side?

The Senate Stalinists accused Sinclair of a “systematic news distortion operation that seeks to undermine freedom of the press.” But most people know that as the mainstream media.

Freedom of the press requires us to accept the idea that a handful of major lefty corporations control the country’s new distortion operation because it also allows conservatives to have their own media.

But the media left doesn’t accept that compromise. It isn’t willing to settle for the first spot in a two-man race. Like Tonya Harding, it wants to take a club to the knee of its political opponents.

In the media’s utopia, just like in a Soviet election or a movie tagline, there can be only one.

Like all leftists, the media doesn’t believe in freedom of the press. It believes in its own freedom. It identifies the First Amendment with itself and declares any threat to it to be a threat to the First.

That’s how the media can call for censoring rival media outlets in the name of the First Amendment.

After Trump’s victory, the media tore apart this country to boost its circulation and ratings (the New York Times and the Washington Post are so outraged that they can’t count the cash fast enough) and manufacture a crisis that would justify consolidating its control over the internet and print media.

Facebook was the biggest threat to the media’s bottom line. That’s why Mark Zuckerberg was testifying in Congress over data privacy issues that weren’t an issue when Obama Inc. had “ingested the entire social graph.” It was one of a series of fake news stories blaming Facebook for Trump’s victory.

Even the average leftist couldn’t care less about Facebook’s impact on the media’s business model. So the media instead rallied its mobs by accusing Facebook of collaborating with Trump and the Russians.

And the howls, imprecations and regulations began.

The media’s endgame was neutering Facebook and turning it into a profitable safe space for its content. The post-election accusations about “fake news” and the later conspiracy theories about “Russian bots” blamed Facebook’s “unregulated” spaces for powering Trump’s seemingly improbable election victory.

The solution to an unregulated space is regulation.

Facebook was blackmailed into letting the media’s fact checkers decide which stories should be allowed. Then algorithm tinkering wiped out the traffic of many conservative sites, leading several to shut down.

Google, Twitter and other social media companies have taken their own steps to prioritize lefty media views and silence conservative ones. The post-Trump environment in search and social has been rigged to be very favorable to the mainstream media and deeply unfriendly to Trump supporters.

The great media dream is a gated internet news operation completely under their control. But the attacks on Sinclair and the Enquirer show that even with the internet, old media is still in the crosshairs.

The media isn’t just going after websites; it’s also going after channels and print magazines. And it’s targeting them using the blunt tools of government censorship. FBI raids and FCC licenses are an escalation from pressuring Facebook into hiring its fact checkers to censor conservative media.

It’s the difference between monopolistic abuses and totalitarian ones.

The media has been using corporations to do its dirty work. But it’s never going to be satisfied with oligarchy if it can grab the brass ring of tyranny. Crackdowns by Citibank and the Bank of America on the Second Amendment or by Facebook and Google on the First Amendment are effective, but unsatisfying. The left didn’t spend over a century dying and killing just to have the Bank of America do its work for it.

As a dog returns to its vomit, the left returns to government repression.

The media will not accept any monopoly that is a hair short of total. FOX News, Sinclair and even the National Enquirer must be destroyed. Corporations and governments will be used as hand puppets to silence every voice of dissent. And it will be done for freedom of the press and the First Amendment.

The free press is a threat to freedom of the press, read about it in the mainstream media.

Roseanne: A Flicker Of Hope For The Silent Majority