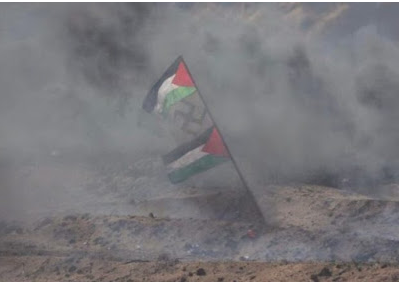 When we talk about the Holocaust, we are talking about the mass murder of millions of Jews.

The dead included my grandparents and countless others, shot, starved, gassed, beaten to death and buried in mass graves. And yet the lessons of the Holocaust in its commemorations rarely have anything to do with Jewish lives.
Millions of dollars have been spent building memorials to the victims of the Holocaust, even as Iran is spending its millions on building another kind of memorial to the Holocaust, in the form of nuclear technology. Ben Rhodes, the Obama crony who helped sell the Iranian Big Lie, sits on the board of the Holocaust Memorial Council. The Washington D.C. museum ignores the murder of Jews in Israel, but is very worked up over the deaths of Muslims in Myanmar, in Egypt and around the world.

Millions more are spent, by some of the same groups that claim an interest in Holocaust education, on bringing Muslim migrants to America and Europe to carry out the promise of an Islamic apocalypse in which, as the Hadith states, “The last hour would not come unless the Muslims will fight against the Jews and the Muslims would kill them until the Jews would hide themselves behind a stone or a tree and a stone or a tree would say: Muslim, or the servant of Allah, there is a Jew behind me; come and kill him.”

If you want to see it slowly getting underway, visit Paris or Jerusalem.

But the murder of Jews, in Israel or Europe, somehow has nothing to do with the Holocaust.

Virtually every major Jewish organization, even the Orthodox Union, were pressured into signing on to obscenely despicable statements equating Muslim migrants to Holocaust victims.

Why the silence? The same reason they didn’t protest the Iran Deal too loudly.

The Obama of the Holocaust was named FDR. His administration was equally anti-Semitic. And chose to ignore the mass murder of Jews until protests by Zionist activists became too loud to ignore.

Saving six million Jews was not a feel good liberal cause. The civil rights movement was.

And it’s never about doing the right thing. It’s about what looks good. It’s what’s popular.

The same organizations that stayed silent during the Holocaust then rebranded it as a universalist civil rights program. The real lesson of the Holocaust isn’t, “Don’t allowed Jews to be killed.”

It’s fight for every leftist cause on the planet… except that outmoded “not killing Jews” one.

The same Jewish organizations that wouldn’t dream of missing a Holocaust commemoration broadcast their commitment to the “Two State Solution” almost as loudly as to the Holocaust.

The only lesson they learned is that another Holocaust needs better marketing.

The Final Solution, with its immediate extermination of the Jews, has been replaced by the Two State Solution, an intermediate process in which the land on which Jews can live is partitioned into smaller and smaller pieces.

The Lebensraum of Islam demands ever more breathing room. And fewer breathing Jews. Israel is carved up into smaller indefensible ghettos. And Jews are barred from living outside those ghettos. Those who are are “settlers” who must be evicted for the sake of the peace that Islam always brings.

Even if they’re “settling” in Jerusalem.: the oldest Jewish city in history.

But the real lesson of the Holocaust is that if we don’t destroy Israel, and bring the migrant synagogue bombers and senior citizen murderers of tomorrow to Europe, we’re no better than the Nazis.

It is easier to build another memorial than to look into your heart and ask why two generations later, the majority of the American Jewish community was still too cowardly to stand up to a liberal icon in the White House… when the lives of millions of Jews were on the line.

From FDR to Obama, American Jewish leaders had two opportunities to stand up to a liberal icon and save Jewish lives. No amount of memorials can disguise the fact that they learned nothing.

The best memorial to the dead is to stop aiding their murderers.

The Holocaust told us a harsh truth about the world and human nature. Its commemorations soften the edges. But we need those harsh truths to know what lies behind the comfortable curtain.

Death is the harshest truth. The next harshest truth is betrayal. And the Jews have most often been betrayed by Jews escaping their Jewishness. Some, like George Soros, did it in the most literal way possible. Others did it by kvelling to an FDR speech while ignoring the ash drifting over Europe. Today, they affirm the Two State Solution, ignore Iran’s nuclear program and click on that inspirational speech by Obama, Cory Booker or the political culture hero next in line.

The Holocaust doesn’t need hundred million dollar museums. To commemorate it, we must pay attention. And we must never let the propaganda of the killers blind us to their crimes.

That’s easy to say about the Nazis, it’s a lot harder when it comes to the PLO, Iran and Hamas.

It’s easy to feel good about disavowing a discredited and fallen ideology. There’s no act of courage there. But try disavowing the Two State Solution and the Iran Deal. That’s a commemoration.

Hollywood Continues to Show Its Complete Disgust and Disrespect For Women

Emery McClendon: We Must Continue to Advance Conservatism in the Era of President Trump